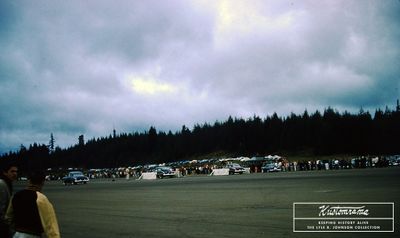 A photo taken at the Shelton Drag Strip in the 1950s. The race was held on an abandoned WWII airstrip in Shelton, Washington, and according to Bob Mikkelsen, all the teens would go out and mark off 1/4 mile and use it as a dragstrip. Photo from The Lyle R. Johnson Collection. 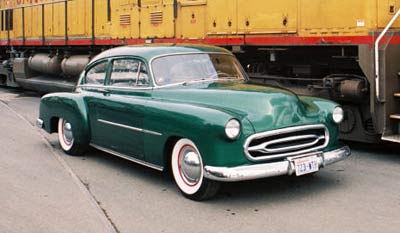 Bob Mikkelsen's 1951 Chevrolet Fleetline of Shelton, Washington. Originally owned and restyled by Norman Brown, the build was started in 1952 and completed in 1955. In 1965 Norman sold the car to Bob MIkkelsen. Bob still owned it in 2017.

Shelton is a small logging and lumber town in Washington. In the 1950s the population was about 5, 045. In 2017 Bob Mikkelsen told Kustomrama that Shelton was a good town; "It was good for cruising, but we normally went to Olympia, our state capitol, 20 miles away. It was burgers and shakes for most of the cruisers. There really wasn't a whole lot of cars but there was Dick Lord's 1953 Chevrolet hardtop, Art Nichlus' chopped and channeled 1932 Ford coupe, and then there was Daryl Mikelthun's 1955 Oldsmobile two-tone 88 hardtop, the car was a bute painted blue and white. Another interesting car was a 1938 Chev coupe with a full-blown GMC engine. It held the local enthusiasts' interest. There probably were more but I think I had left for college, in 1960, about that time."[1]

"In our hometown of Shelton there was an abandoned WWII airstip. So all the teens would go out and mark off 1/4 mile and use it as a dragstrip," Bob Mikkelsen told Kustomrama.[1]

Please get in touch with us at mail@kustomrama.com if you have additional information or photos to share about Shelton.