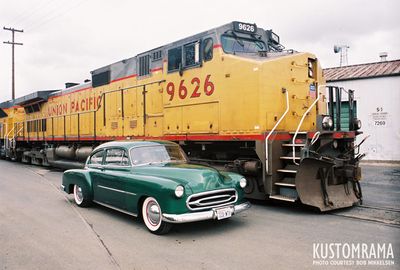 A photo of Bob's Chevrolet as it appeared in 2017. Photo courtesy of Bob Mikkelsen. 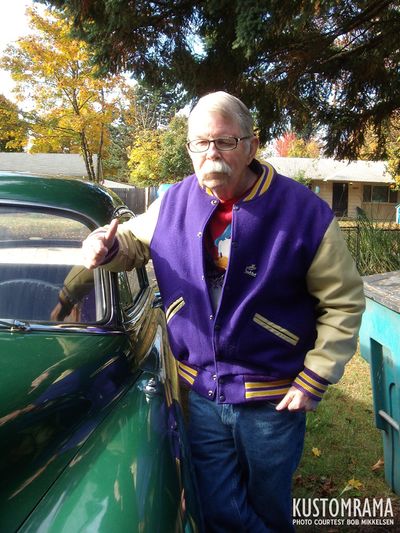 A recent photo of Bob with the Chevrolet. Photo courtesy of Bob Mikkelsen. 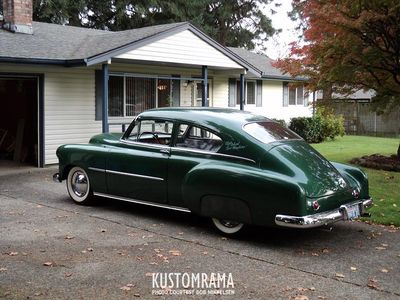 A photo of the Chevrolet taken in front of Bob and Monna's home in Vancouver. You can see the name "High School Time Machine" on the side behind the passenger window. Photo courtesy of Bob Mikkelsen. 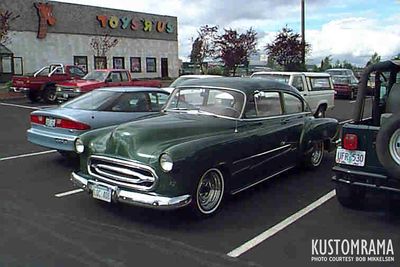 In 2017 Bob's Chevrolet was still driven every day. Photo courtesy of Bob Mikkelsen.

Norman bought the Fleetline new in Goldendale, Washington. He started restyling the car in 1952, and it was built over a three-year period. Norman nosed and decked the car before he frenched the headlights and installed a one-piece 1950 Oldsmobile windshield. An oval grille opening and a 1954 Pontiac grille were installed after a fender bender with another car. In the rear, Norman installed 1950 Pontiac taillights.[1]

In 1965, Bob Mikkelsen of Shelton, Washington spotted the Chevrolet beside a car repair shop in Yakima, Washington. In 2017 Bob told Kustomrama that it was slowly starting to deteriorate when he found it; " While I was attending college in Ellensburg, Washington, that is located in the exact center of the state of Washington, my wife and I drove to Yakima and I spotted the 1951 Chevy near a body shop with damage to the right hand quarter panel and up by the rear window on the left side. I inquired about the car from the man at the body shop and he told me where I could find Norman Brown. At first when I spoke to Norman he didn't want to sell it but I came back again and he said it didn't have an engine but I told him that it didn't matter to me because I could put an engine in it. I asked him how much he wanted for it and he said $ 50.00 if I remember correctly. So I bought it and towed it back to Ellensburg about 35 miles away and parked it at my apartment. The engine was missing and tires and wheels probably weren't going to last very long. So what about this 1951 Chevy I had just purchased? It had a nice body on it and original factory paint but that didn't matter because we were going to start working on it by putting on some frenched headlights, but wait, what's this? It already had frenched headlights and 1950 Pontiac taillights and a nosed hood and shaved deck lid and 1950 Olds windshield and a custom grill made out of round tubing completing a full oval for the nose. It had a lot done to it and was a prize and I got it for so little." The interior of the car featured aftermarket seat covers over the original covers.[1]

When Bob purchased the Fleetline, the drivetrain was gone. Bob already had a dead-tired 1950 Chevrolet Fleetline when he picked up the '51, so the engine from the '50 was eventually hopped up and installed in the '51. It received a two-pot Fenton intake and Fenton cast-iron headers. Later on, Bob and his wife Monna wore the six out, and it was replaced with a 283 engine and later a 307. In 2017 Bob and Monna were living in Vancouver, Washington. They still own the car, and drives it reularly, racking up half a million miles over the years. They have no plans on retiring it. "We repainted it and had it striped and had a name put on it "High School Time Machine". We had a custom gray interior, that I designed, put in since the original interior was getting pretty tired. Everywhere we go people recognize our car and honk at us."[1]

Please get in touch with us at mail@kustomrama.com if you have additional information or photos to share about Norman Brown's 1951 Chevrolet.