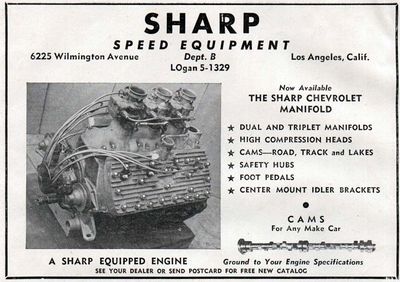 Sharp Speed Equipment is a speed equipment manufacturer established in the 1940s. Sharp was founded by Al Sharp after WWII. After returning from the navy in 1945, Al opened a shop called SP Products together with Gordon Pilkington. Both Al and Gordon worked in Los Angeles as pattern makers. SP Products did some work for some of the early speed equipment makers, but after a while the racers came directly to Al and Gordon in order to have custom parts built for their cars. These parts became the start of Sharp Speed And Power Equipment parts.[1]

Please get in touch with us at mail@kustomrama.com if you have additional information or photos to share about Sharp Speed Equipment.