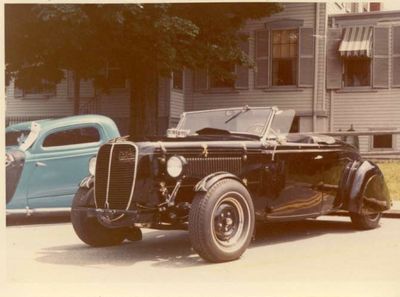 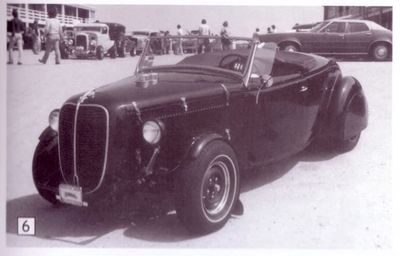 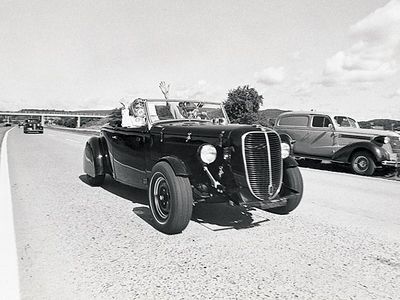 This photo of Sabie in his roadster was published in Street Rodder March 1976. Taken in 1975, it shows Sabie cruising in the roadster on the way to the Northeast Rod Run. Photo by Thomas McGinnity, courtesy of Street Rodder. 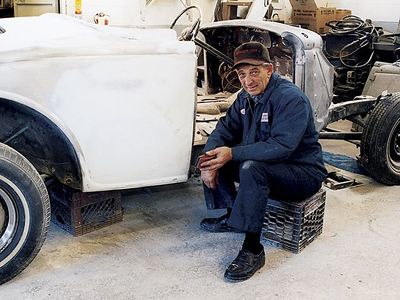 Lenny with the roadster during the restoration in the late 1990s. Photo by Chuck Vranas, courtesy of Street Rodder.

Sabie's old roadster at a Boston area show in the early 200s. Photo courtesy of Five-Windo-Girl, from The HAMB. 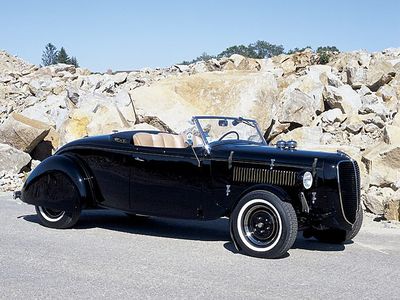 Sabie's old roadster as it appeared when it was featured in Street Rodder September 2009. Photo courtesy of Street Rodder. 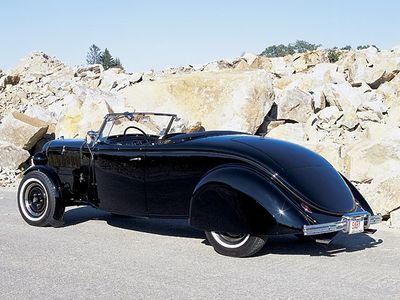 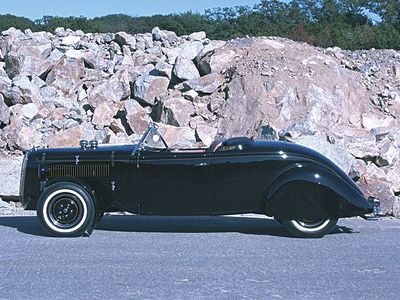 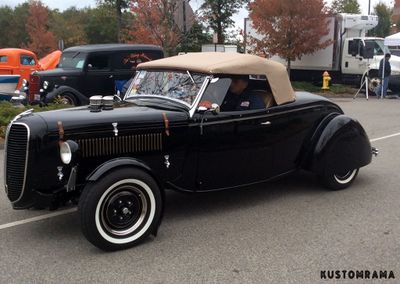 Sabie's old hot rod, with Lenny Biondi at the wheel, October 24, 2015 in Quincy, Massachusetts. Photo courtesy of Tom Bono I.

1936 Ford roadster owned and built by Sebastian "Sabie" Rubbo of Massachusetts. Sabie started working on his roadster at age 23, in 1945. He had just gotten out of the Navy, and was inspired by the cars he saw racing at the dry lakes near where he was stationed in Southern California. When he returned back home, he bought a 1936 Ford roadster that had been hit up front. The car was so bad that he decided to put a better chassis under it. He removed the body from the original frame, and installed it on a rolling 1940 Mercury frame. The body was channeled 6 inches over the frame, and the rear suspension was modified by adding a Model A crossmember and spring. Other 1940 Mercury parts such as the wheels and steering column found their way to the car as well. A 1932 Ford rear bumper was installed in the rear of the car. The running boards were removed, and front fenders were made from a portion of a 1936 Ford spare tire ring. Rear fender skirts were custom fit using five Dzus fasteners. Up front, Sabie installed a 1937 Ford truck grille that he chopped 6 inches and narrowed about 3 inches. The hood had to be extended to meet the shell. Inside, Sabie installed a bench seat from a mass transit bus. Sabie completed the build in 1946. Once complered, he drove the car everywhere. Any dash plaque he could get from a car show he attended, he added to the sill plate.[1]

Over the years, Sabie altered the design of the car, and a 1949 Chevrolet license plate guard were later added to the 1932 Ford rear bumper. Cal Custom headlight stands were also installed. In 1970, Sabie attended the first annual Street Rod Nationaks in Peoria, Illinois with the car.[1]

In 1976 Sabie wanted to freshen up the roadster, and he had Lenny Biondi paint it. Sabie and Lenny were good friends, and Lenny would go with Sabie on many shows. In the mid 1980s Sabie was diagnosed with cancer, and he tried to make as many shows as he could. In 1987 he was very sick, but he flew to the Street Rod National in Columbus where he was honored by the NSRA for his contribution to the street rodding hobby. In November of 1987 Sabie decided to do some work on the roadster, and replace the rear spring. Biondi helped shuttle him around to get the work done, but the cancer soon caught up with him and he passed away in 1988. By then, Sabie had driven more than 400,00 miles in the roadster.[1]

Sabie left a wife and three children, each of whom received one of Sabie's car. The '36 went to his son David Rubbo. After a family meeting in 1991, David decided that Lenny Biondi would be the best person to sell the roadster to. Biondi accepted, and drove the car around for a few years. When Lenny got the car, it was powered by a 1948 Mercury engine that Sabie had bumped up the displacement in from 239 cubic inches to 286. The engine did also featured pistons with a 10:1 compression, an Isky 400JR camshaft, Mallory ignition, Fenton headers, Brockman mufflers, Offenhauser heads, a Thickstun dual intake manifold with two Stromberg 97 carburetors and Stelling & Helling air cleaners. The engine was mated to a 1940 mercury transmission that had been outfitted with Zephyr gears. After 60 years on the road, Lenny decided to blow it apart for a major rebuild in 1995. When Lenny redid the car, he cleaned up some of the crude welding work that had been performed on the car in the 1940s and 1950s. Wood used in the seating area were replaced with steel. The body was stripped for old paint, before Bobby Mullins, an expert painter at Biondi's Service Center in Quincy, Massachusetts, gave it a new black PPG paint job. Once the body was painted, J. Warren Alessi pinstriped it in gold. Inside, the seats were covered in leather by Bob's Auto Top of Quincy, Massachusetts. The restored version of the roadster made it's debut at the 50th Ty-Rods Reunion.[1]

Please get in touch with us at mail@kustomrama.com if you have additional information or photos to share about Sebastian Rubbo's 1936 Ford.