As it appeared in Rod & Custom March 1960. Photo by Roger Kilborn. 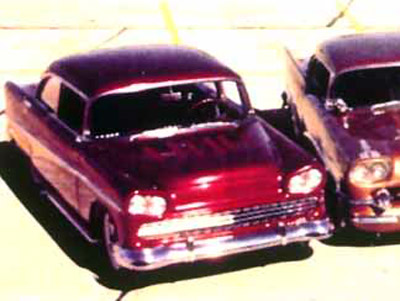 A cropped version of the photo above. 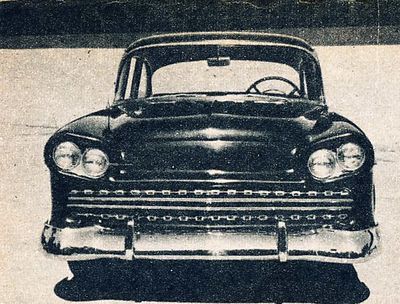 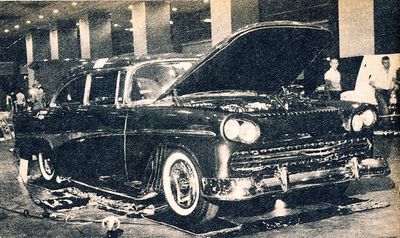 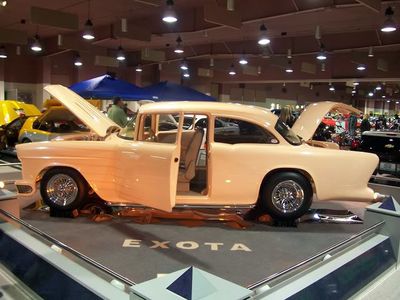 How it sat before Chaotic Customs refurbished it. 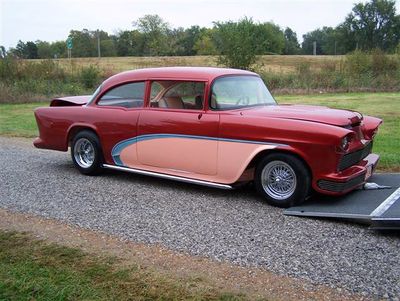 How it sat after Chaotic Customs refurbished it.

1955 Chevrolet restyled by Darryl Starbird of Star Kustom Shop for Ron Dubberstein of Winfield, Kansas. Ron first brought his Chevy to Darryl in 1958. Ron's Chevy featured quad Imperial headlights frenched by using tubing, 1958 Ford sidetrim, a custom tubular bar grille componed by 1959 Buick components and a molded grille shell. The side trim concealed releases for the electrical operated door latches, which were activated by thrusting a 1/8" diameter wire key into a hole, hitting a micro switch. 104 louvers were punched in the in the hood. The bumpers were shaved for its bolts and re-chromed, using a 1955 Chevrolet station wagon bar in the rear along with a set of Ford station wagon bumper guards. When all the bodywork was done, it was painted 20 coats of gleaming Candy red lacquer. In order to get the right stance, it was lowered 4" all around. The engine was bored and fit with three carbs and a Dunlov cam.[1]

The car is still around, still owned by Ron! However it's appearance has changed over the years, and the latest version by Chaotic Customs in Mulvane, Kansas from 2009 features a candy red and pastel two-tone paint job separated by a painted Buick trim.[3]

Please get in touch with us at mail@kustomrama.com if you have additional information or photos to share about Ron Dubberstein's 1955 Chevrolet.