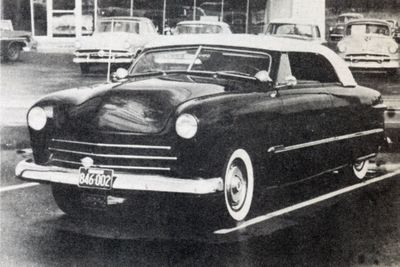 Robert's Ford as it appeared in the Souvenir Pictorial from the 1958 Hartford Autorama. 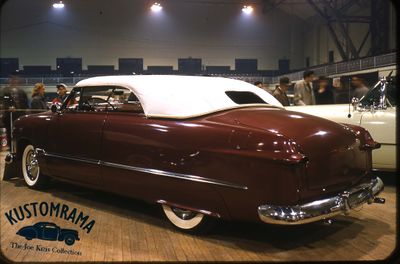 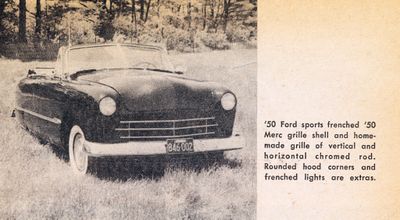 This photo of Robert's Ford was published in Rodding and Re-styling August 1960.

1950 Ford convertible owned by Strokers of Springfield member Robert Zepke of Hampden, Massachusetts. The body on Robert's Ford was all molded and frenched. It was nosed, decked and shaved for handles. The hood corners were rounded and the grille shell was reworked. A handmade grill consiting of 3 chromed bars was installed in the reworked opening. The bumper guards were removed for a cleaner appearance. The top was chopped 4 inches, and it was fit with a padded top. Dual spotlights and later model hubcaps were installed along with a custom made black and white pleated interior. The headliner was black with white diamonds. The car was lowered by cutting the front could 2.5 inches, and by installing 2 inch lowering blocks in the rear. Equipped with a Mallory coil, the car was good for 110 mph. In 1958 Robert's Ford was shown at the 8th annual Hartford Autorama. by then, the car had won 3 awards in 4 shows, and it was valued a $2,500. Robert was the secretary of the Strokers of Springfield hot rod club at the time.[1]

Please get in touch with us at mail@kustomrama.com if you have additional information or photos to share about Robert Zepke's 1950 Ford.