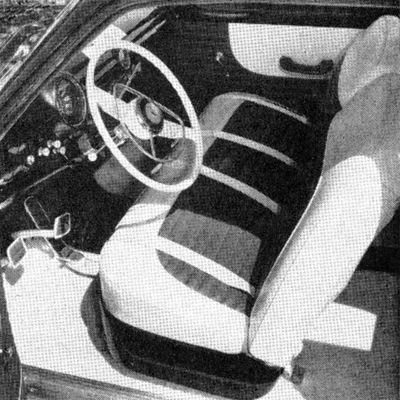 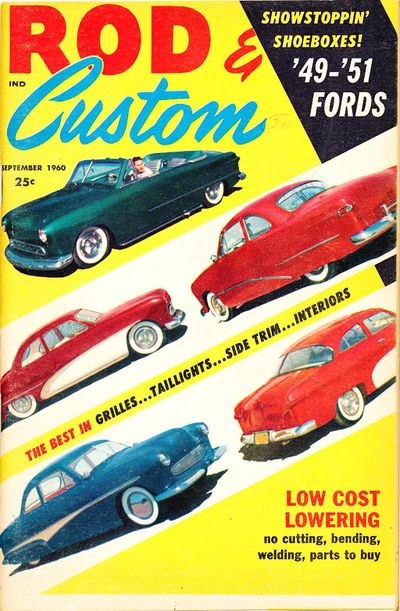 Robert's Ford on the cover of Rod & Custom September 1960. 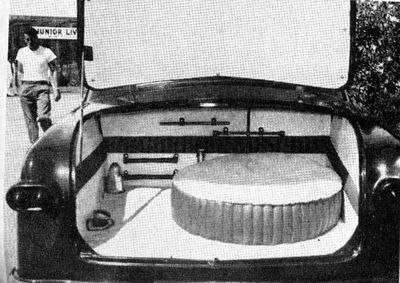 1950 Ford Club Coupe owned and restyled by Robert L. Smith of Mountain View, California. Rob built a custom grille shell which he inserted a floating grille filled with screen mesh. The antenna hole on the right fender was filled, and the door handles were removed. The car was nosed, decked and had its side trim removed in favor of trim combined from a 1953 Buick and 1956 Buick. The hood was also louvered, and had its corners rounded. The smooth appearance of the headlights were achieved by using 1951 Chevrolet headlight rings. The taillight housings were reshaped in order to fit a set of 1952 Buick lenses which were frenched-in. The gas-filler pipe was moved to inside the trunk for a cleaner appearance. Once the bodywork was done, it received a two-tone paint job of Titian red and white. Robert brought the car over to King's shop in Mountain View to have the interior upholstered in red & white Naugahyde, complete with padded foot pedals, hump, and kick panels. The trunk was done as nice as the interior.[1]

Please get in touch with us at mail@kustomrama.com if you have additional information or photos to share about Robert L. Smith's 1950 Ford.