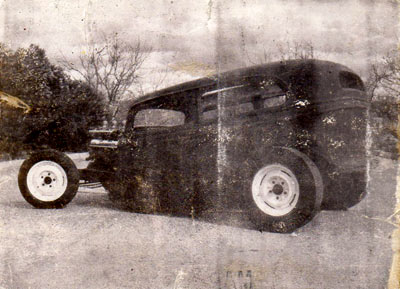 Rick Menz' 1934 Ford Tudor-Sedan . Rick began building the car in 1960. At the time he was a member of the Chancellors of Van Nuys car club. He sold the Ford in 1962 before the build was completed.

Rick Menz of Sepulveda, California. In 1960 Rick joined the Chancellors of Van Nuys car club. Rick and Bob Booth were next door neighbors from 1951 to 1962, and they were both members of the club. Bob had an older brother Jack, who was also in the Chancellors. In 2018 Rick told Sondre Kvipt of Kustomrama that he had a 1934 Ford tudor sedan with a Buick nailhead engine when he was a member of the club; "It was about half complete. I decided to go to college at age 19, so I sold it to another person, not in the Chancellors. Not sure what happened to it beyond that." The Buick engine was fed through six dual-port carburetors. Rick also had a 1956 Pontiac that he drove around town and to Bob's Big Boy in Van Nuys. In 1962 Rick went to college and got a degree in mechanical engineering. He had to give ut the Pontiac in 1971 to pay for college tuition.[1]

In 2018 Rick was living in Maryland. He had been in the Baltimore area for about 40 years then, and at age 76, he was working on a 1934 Ford four-door sedan hot rod with air-suspension and a V-12. Other cars in Rick's collection at the time included a 1931 Ford Model-A, two-door phaeton, and a 1959 Cadillac convertible. Both cars were completely restored. "An old “hot rodder” mechanical engineer needs a hobby — I don’t play golf!!" Rick told Sondre.[1]

Please get in touch with us at mail@kustomrama.com if you have additional information or photos to share about Rick Menz.