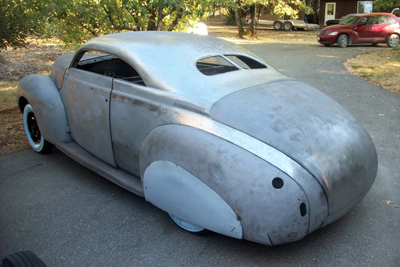 Reno Casasola of Guadalajara Mexico, was born outside of Venice , Italy on December 31st 1964.

Ever since Reno was a young kid, he always been involved in old Harley Davidson bikes, (mostly scandinavian style bobbers rather than choppers) At young age he owned a Shovel Electra Glide shovelhead, and then a couple a knuckleheads. His ride in Florida when living there was a 1941 knuckle in stock original conds, "great driver" Reno sais.

Growing up in Venice, there were no car scene. That's why he had to travel to Switzerland to see some serious american cars, that were mostly stock stuff.. But just later on he started to travel up to Sweden to check out the impressive bike and car scene up there, and gradually evolving in appreciate very much the traditional customs and hot rods. He met a lot of people up there in Scandinavia, in Italy they had practically no scene, only Corvettes and Mustang.

Reno sais: "Trip after trip, when guys in Sweden and Finland were opening theier garages the stuff in there was impressive and i got eventually more deep into customs... I was looking at the very first custom Mercury (49 or 50 coupe) in the late 1990s. But i could'nt find any in Europe, at that time I was living in Amsterdam for a year or so. When there, I got a hint from somebody from Mexico City having a number of higway patrol Harleys for sale. So I called the guy and after a number of calls talking bikes he asked if i was interested in old cars. He had not one, but two 1949 and 1951 Mercury coupes in project stage for sale cheap. We struck a deal and i bought both cars. So this deal gave me a reason to fly to Mexico City in early 2005. I immediately realized that there were a huge number of US abandonded cars in DF (Federal District aka Mexico City). So i started to look around and found some good car deals and istarted to be in Mexico back and forth more often buying and selling old cars and bikes to pricipally Scandinavia, Europe , Australia and New Zeland."

Please get in touch with us at mail@kustomrama.com if you have additional information or photos to share about Reno Casasola.