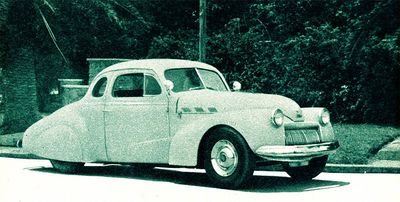 As it appeared in Rod & Custom December 1953 Photo by Billy O. Boyles 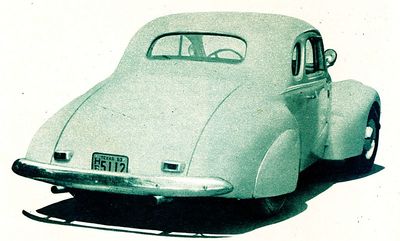 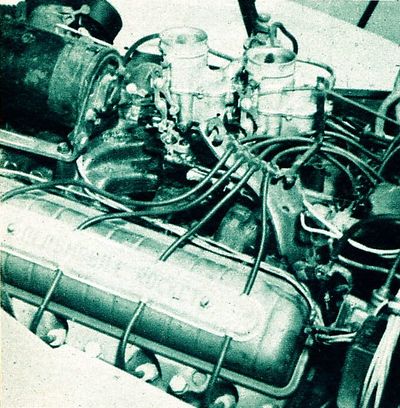 1938 Chevrolet business coupe owned and restyled by Rene J. Leonhard of Corpus Christi, Texas. After selling his 1949 Buick Convertible, he started looking for a Ford coupe. While searching one day, he came across a 1938 Chevrolet business coupe. He began tinkering with the idea, and figured out it did not need as much of body modifications as the Ford. The windows were narrow, so he did not have to chop the top, and there was not a great deal of space between the rear of the doors and the rear fenders, as is the case with most Ford coupes. He decided to buy it, and after paying $35, he hauled it to his home. He began by removing the stock engine and transmission, took the front and rear suspension out, and removed the body. The chassis was then stepped 6" and shortened 3", which gave the car a wheelbase of 100". The body was lowered about two inches over the frame rails as well. He got hold of a Columbia rear end, and installed the Oldsmobile Rocket 88 engine and Hydramatic trans which had previously powered the Buick. He decided to take out the engine and trans of the Buick for just such a possibility as this Chevrolet. He welded on a narrowed Olds crossmember and installed a torque tube drive using a 1940 Mercury driveshaft that was chopped two feet and fit with 3.54 gears. It turned out on the first road test that this did not work, it howled as a lonely wolf. After a lot of machining and configuration, he made it work by using Oldsmobile and custom made parts with 3.78 gears for better acceleration. The radiator was from a 1941 Buick Roadmaster, securing enough cooling. He made a dual intake by using 1950 Ford pots.[1]

The front and rear fenders were from a 1940 Pontiac, along with the hood. The front fenders were unchanged, but the hood was another story. It had to be shortened a foot, widened at the front and narrowed at the rear to fit the Chevy's contour. When he installed it, he realized it was no clearance between the hood and carb. This problem was solved by cutting a 1939 Chevrolet headlamp in two and weld it on top of the hood, making more that enough clearance, and forming a scoop. The rear fenders presented yet more problem, which was solved with lead. He used 11 1/2 pound on the right fender, and 9 1/2 on the left. Leo said he got better as he went along, which explains the difference amount. The grille was a 1942 Ford unit, without the original center section. The seat was from a 1940 Ford upholstered in eggshell white and black, and the dash from a 1949 Mercury. The steering wheel was a Buick unit. In the rear the installed a set of 1941 Chevrolet taillights, mounted sideways. The deck lid could open and close by just the push of a button. The car was painted Canto Cream white when finished. It featured dual spotlights, fender skirts, and 1947 - 1952 Cadillac Sombreros on blackwall tires.[1]

Please get in touch with us at mail@kustomrama.com if you have additional information or photos to share about Rene J. Leonhard's 1938 Chevrolet.