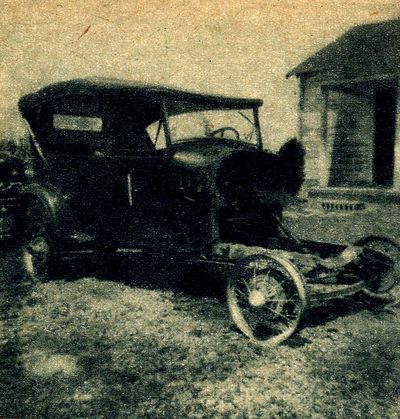 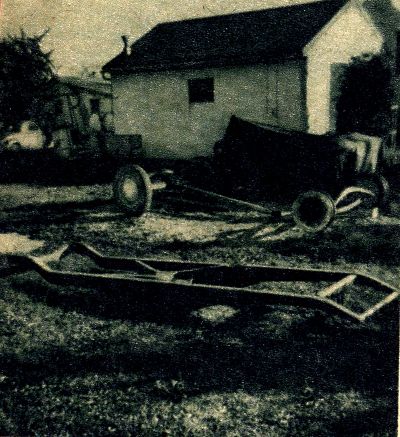 Essex side rails were used along with a 1937 Ford crossmember. Photo by Ray Van Elta.

Needless to say, Ray would much rather drive the tub than the stock '50 Ford.Photo by Ray Van Elta. 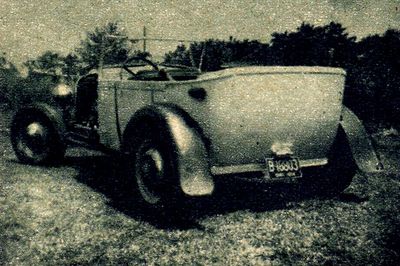 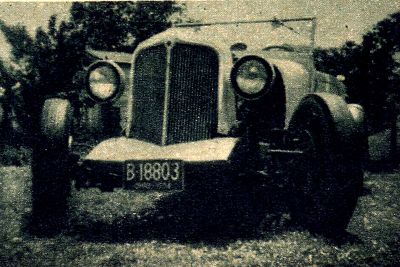 Grille shell was from a 1933 Chrysler. Photo by Ray Van Elta.

1928 Ford Phaeton built and owned by Ray Van Elta of Columbus, Ohio. Ray began building the car from scratch, by the time he began building it, he was married and had two children. Keeping the kids in clothes, his wife in a new home and himself in a late 1950 Ford meant that expenses incurred by outside activities to be kept at an absolutely minimum of time. Ray kept dreaming, and suddenly a engineless, tireless, seatless, fenderless 1928 Ford Phaeton turned up at the local wrecking yard. Happy as a kid with a new toy, Ray pushed his dream-boat homeward much to the dismay of his wife whose expressions on seeing the car for the first time is best left to the imagination. [1]

His wife's questionable joys quickly turned into cries of horror, when Ray four weeks later trailer home a wrecked 1937 Ford 2-door, the rusty chassis from a 1929 Essex and a totally demolished. 1939 Mercury Coupe. Pacifying his wife part of the time and digging through the components of his hobby the remainder of the time, Ray found that he had acquired all the pieces necessary to build a true rod. However, the lack of time to bolt everything together was missing. Working weekends and evenings, Ray eventually sorted pieces from each of the cars and so the actual construction began.[1]

The driver's door was missing, so he acquired one from Oakland, California by mail. He used the Essex side rails together with the 1937 Ford crossmember. Brakes from the Merc was installed to the 1937 Ford axles. The transmission originated from the '37 Ford, and the engine came from the Mercury. The Merc was relieved of its dash as well. The body was channeled over the Essex rails. The channeling necessitated to rase the rear fenders, the leading edges of which now opened with the rear doors of the touring car. Taillights were from a 1939 Chevrolet. Grille shell from a 1933 Chrysler was installed, surrounding the 1939 Mercury radiator. The headlights were from a 1930 Ford with seal beam units inserted. Finally after the puzzle was complete, Ray eventually turned up with a channeled A tub. The only one of its kind according to Ray. Best of all, his wife got happy, the kids loved to ride in the tub and Ray finally got his hot rod. [1]

Please get in touch with us at mail@kustomrama.com if you have additional information or photos to share about Ray Van Elta's 1928 Ford.