Philip Sauers' 1951 Mercury - Sashta, of San Diego, California was restyled by Dean Jeffries, and striped by Von Dutch. It was finished on december 24th 1954. 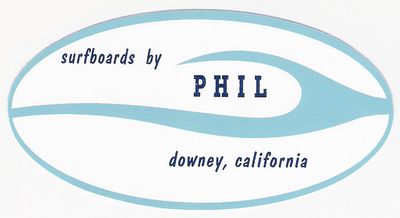 An old sticker from Phil's surf shop, "Surfboards by Phil".

Phillip Sauer of Huntington Beach, California was born on January 16th, 1937. His father Cecil, was worked as a lifeguard, and the interest for surfing developed within Phil. While on summer vacation in San Clemente, he was taught how to surf by legendary Pop Proctor. Later on in 1956, he went to Hawaii to catch the big waves. After a year of exploring for surf spots, Phil set sail along with his friend and a wannabe captain on a small 38 foot sailboat known as The Gitana on October 4th, heading for Seattle, Washington. But only five days after the journey begun, a terrible storm caught their boat, and they were lost at sea for the next 71 days. They managed the two months with extreme thirst, and they were washed ashore 150km north of Cabo San Lucas, California.[1]

Four years later in 1961, Phil opened a surf shop on the corner of Firestone and Lakewood Blvds in Downey, called "Surfboards by Phil". Eventually the movie industry noticed Phil's shop, and over the next few years, it would be know as "Surfboards To The Stars". And they were featured along with his clothing line in almost every beach party movies, including, "Ride The Wild Surf", "Muscle Beach Party", "Beach Blanket Bingo", "How To Stuff a Wild Bikini", "Dr. Goldfoot And The Bikini Machine", "Beach Ball", "Bikini Beach", "Wild On The Beach", also classis tv shows as the "The Monkees" and "Gidget"[1]

These days, Phil is living in New York, where he spends his days lobbying heads-of-state at the United Nations on behalf of worldwide fresh water issues via the environmental organization he founded, known as the "World Water Rescue Foundation".[1]

Please get in touch with us at mail@kustomrama.com if you have additional information or photos to share about Philip Sauers.