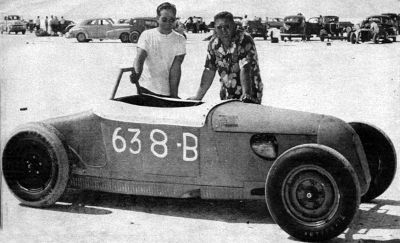 Paul Sylva, to the left, with his driver Ray Beck at the 1952 Bonneville Nationals. 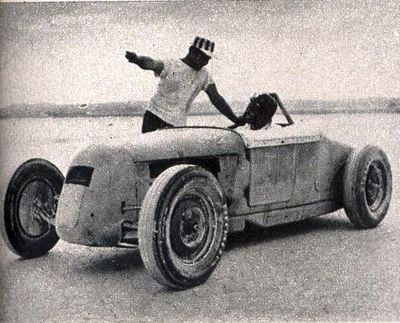 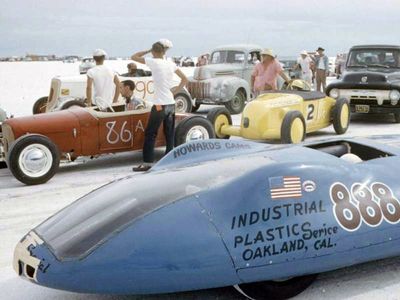 Paul's roadster at the 1954 Bonneville Nationals. Photo from the Life Archive. 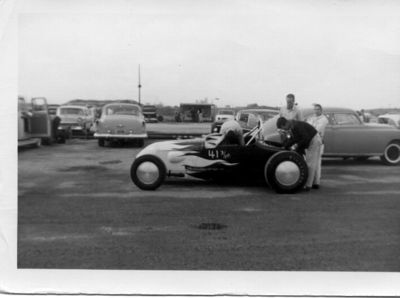 The roadster as it looked when Carl Weeks and Jim Noble raced it. This version was flamed and pinstriped by Von Dutch in 1955.[1] 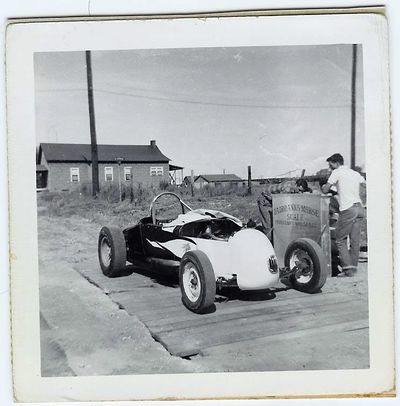 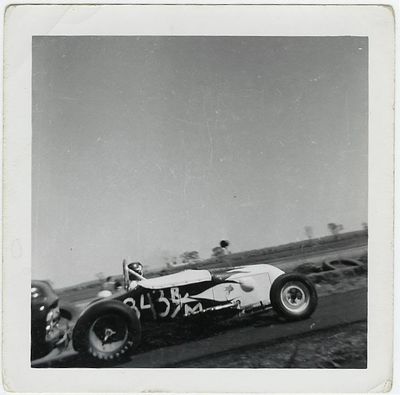 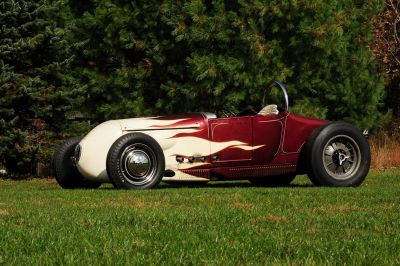 The Paul Sylva roadster as it appeared when it was advertised for sale at the RM Monterey Auction in August 2011. The paint-job is untouched since 1955, still featuring the original Von Dutch flames and pinstripes. Photo by RM Auctions. 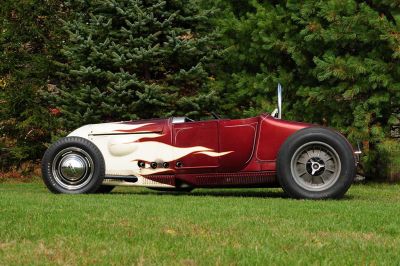 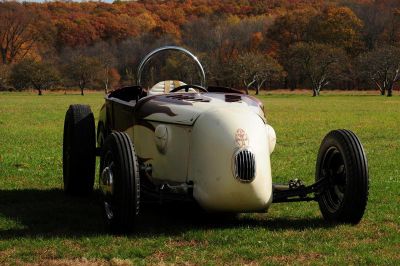 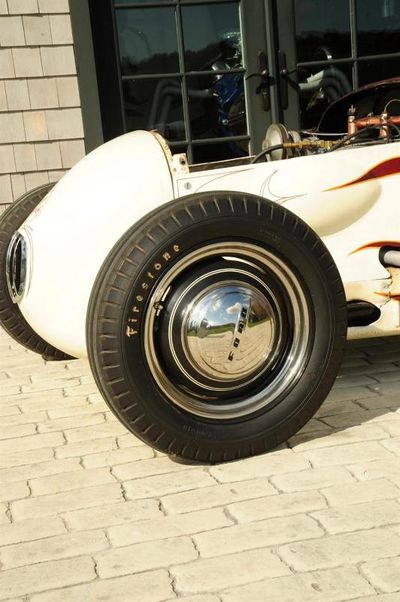 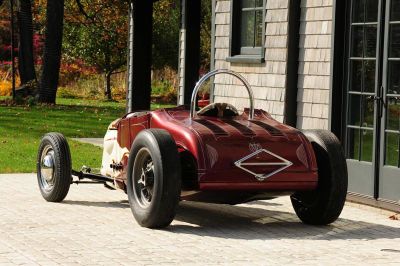 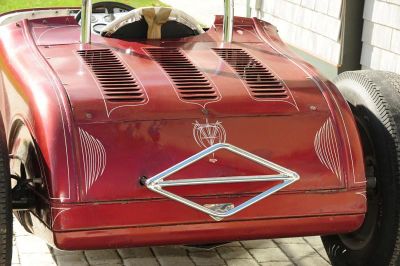 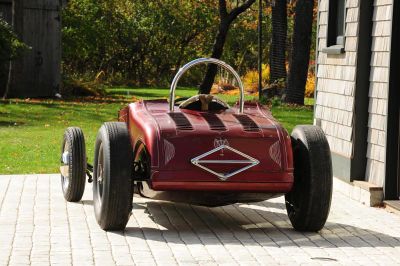 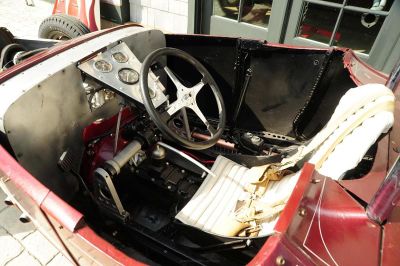 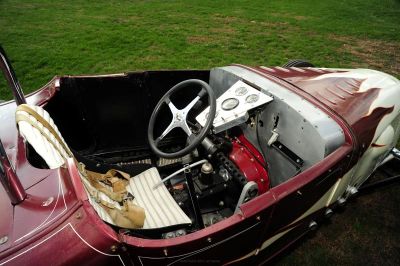 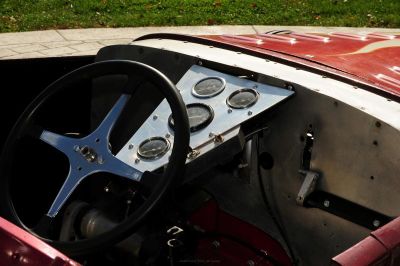 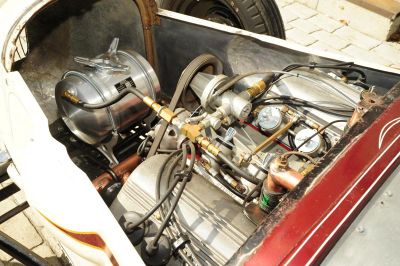 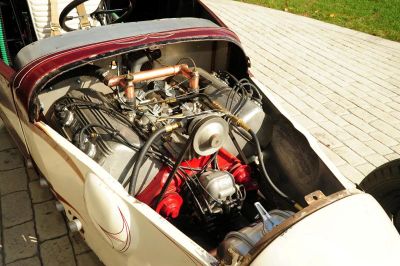 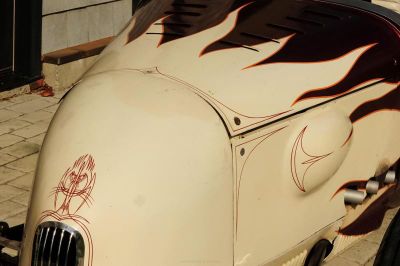 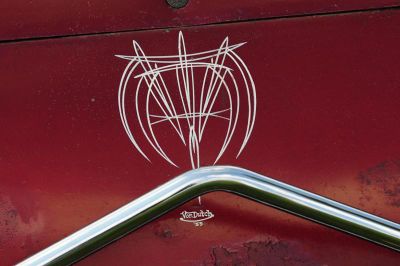 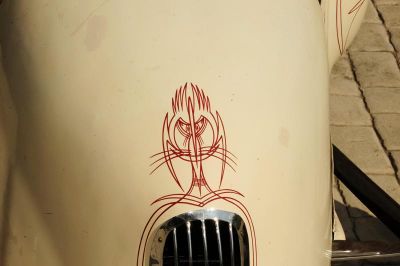 1927 Ford Model T roadster owned and built by Paul Sylva. The project was initially started by Jim Nairn around 1950/1951. Wanting to reduce the weight as much as possible, Jim cut over 360 holes in the body and chassis. According to Hot Rod Magazine April 1953, Jim ran out of money, and he sold the project to Paul Sylva before it was completed. The chassis was hand-built, and Paul like what Jim had started, so he continued adding lightening holes on his own. A 1927 Ford Model T roadster body was channeled over the modified frame and fit with a full belly pan in order to achieve lowest possible wind resistance. Other modifications included Franklin center steering, a war surplus bucket seat upholstered in black co-hide, a Bell Auto Parts four-spoke steering wheel, a full tonneau cover and a 0-8,000 rpm tachometer. A large curved water tank was contoured to clear the deck lid, and it was mounted as far rearward as possible to optimize weight distribution. The engine was a 1946 Mercury flathead V8 with Ardun overhead-valve heads, a Harman and Collins magneto and Hilborn fuel injection.In order to achieve a displacement under the 270-cid class limit, the flathead was bored to 3 5/8 inches. The 3 3/4 inch stroke was left stock. This resulted in a displacement of 258 cid.The racing weight was reportedly 1,600 lbs.[2] The build was finished just in time for 1952 Bonneville Nationals, and one of the last things Paul did to his lakester was to install flexie type headers.[3] Driven by Ray Beck, the roadster achieved a creditable 157.61-mph, which was good enough for second place in the "B" modified roadster class. It was later discovered that the engine had a bent valve stem, and that the fastest run had been made with only 7 working cylinders. Sylva returned to Bonneville again in 1954. Running in the C Class, Paul's modified roadster turned an impressive 178.30 mph. The next day it was clocked at an astonishing 187.79 mph. On it's back up run, the engine blew a head gasket, and a return run wasn't made.[2] This version of the roadster was painted yellow, and it had been restyled featuring a new and smaller grille.

In 1955, the roadster was repainted and brought to Von Dutch for a flame and pinstriping job. After that, Paul loaned it to Carl Weaks and Jim Noble, a well-known drag racing duo that made headlines with it. At the San Gabriel drags, the roadster turned 128.38 mph with an 11.29 second elapsed time as the Weaks & Noble entry. This version was painted in a similar fashion as the record setting Weaks & Noble '32 Sedan. Record also shows that it was now powered by a fuel-injected DeSoto Hemi running on nitro-methane fuel. This could be the very same engine that earlier had set record in the Weaks & Noble '32. According to the Hot Rod Magazine November 1956 coverage of the NHRA Nationals in Kansas City, the roadster was clocked at 134.93 mph at that event. The roadster was drag-raced until 1960, when it was sold to Tommy Traylor, the co-founder of Specialized Auto Parts in Houston, Texas. Traylor later sold the roadster to one of his employees Trip Parr. Parr sold the roadster to Don Ferguson, Sr. in 1961 or 1962. When Ferguson bought the roadster, it was once again powered by an Ardun V-8. The Ferguson family kept the roadster for over forty years. While they owned it, Don Ferguson, Jr., owner of Ardun Enterprises in Wilmington, California installed a fresh, bored and stroked, 284-cid fuel-injected Ardun-Mercury V-8, similar to the engine it had in 1953. This was done shortly before the Ferguson family sold it. The next owner kept the car until August 2011. In August, the old roadster was sold at the RM Monterey Auction. The Sylva roadster was offered without a reserve, and the estimated sales price was $90,000 - $120,000.[2] The auction ended at $55,000 USD.[4]

Please get in touch with us at mail@kustomrama.com if you have additional information or photos to share about Paul Sylva's 1927 Ford.