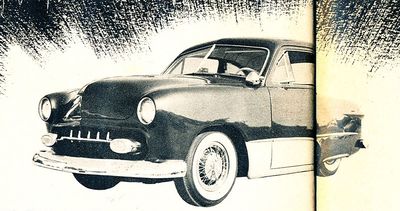 As it appeared in Car Craft December 1955. Photo by Bob Hardee. 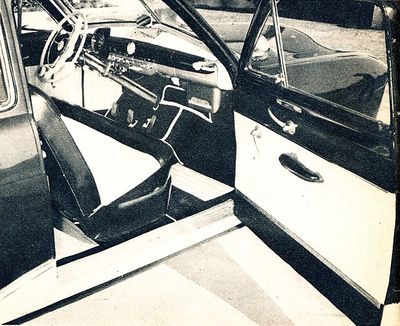 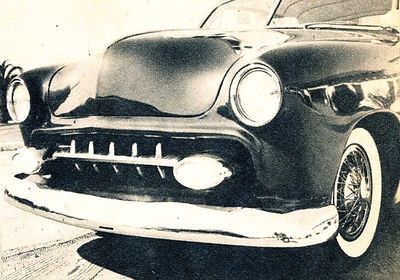 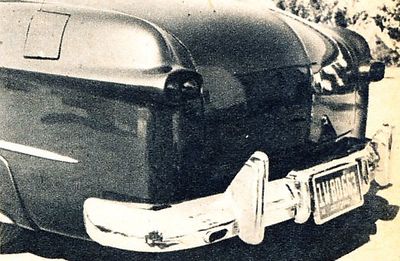 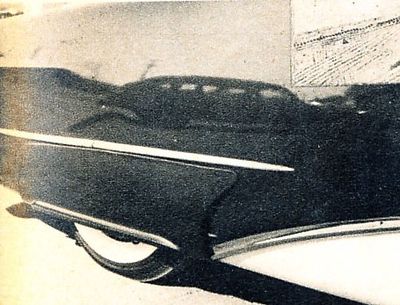 1950 Ford Club Coupe restyled by Styler's Custom Shop in San Diego for Noel Thomas of San Diego, California. Noel's tastefully done shoebox had all its body seams filled, the hood and deck lid was shaved, and Lincoln push buttons were installed in the doors. The front was restyled by creating a new grille opening by using tubing. The grille bar was from a 1954 Oldsmobile, modified with clear parking lights and 1954 Ford pickup grille teeth. The headlights were frenched by using 1952 Ford rings, and the hood corners were rounded. The stock taillights were discarded and replaced with 1951 Buick lenses, in order to do this, stock taillight housings and the wind spears had to be enlarged slightly. The front bumper was shaved for bolts and guards, and the rear featured an 1949 Chevrolet license guard, oval exhaust outlets were made in the bumper as well. The fender skirts were from a 1951 Mercury, cut down to fit the Fords wheelopenings, it was also reshaped and fit with a scoop. The two-tone paint job was separated by Buick trim. The car was lowered 4 inches both aft and rear. Dual spotlights and Kelsey-Hayes wire wheels wrapped up the style.[1]

The interior was given the full treatment, with rolls and pleats, done nicely in black and white. The carpet was black with white piping.[1]

Please get in touch with us at mail@kustomrama.com if you have additional information or photos to share about Noel Thomas' 1950 Ford.