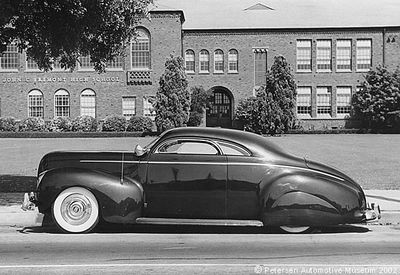 Nick's mercury outside Fremont High School, the high school that he graduated from. Photo by George Barris 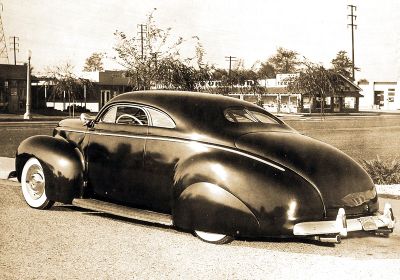 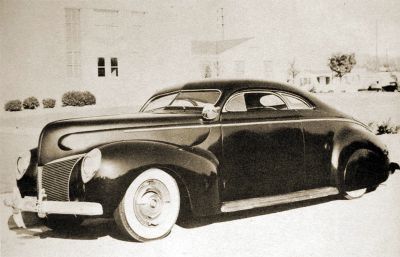 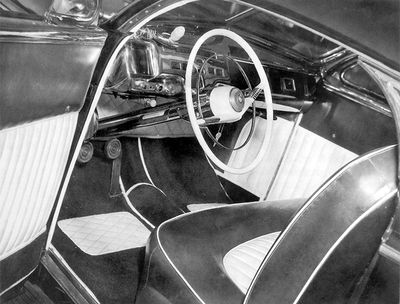 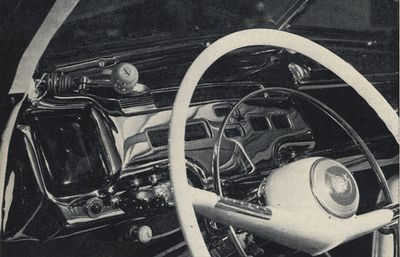 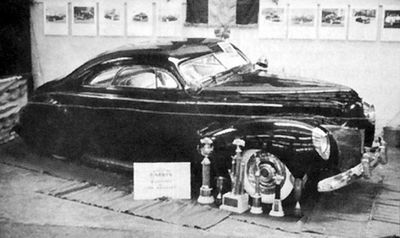 Nick's Mercury at the 1951 National Roadster Show in Oakland. 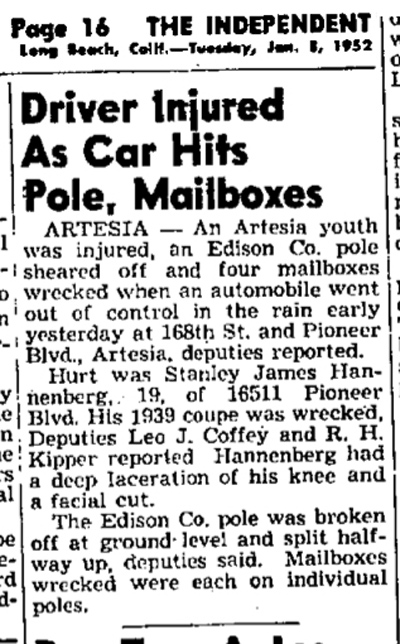 1940 Mercury restyled by Barris Kustoms for Nick Matranga. Nick bought the car for $650 in 1949.[1] Nick had hung around the Barris Shop for a while before he bought the car, and he was really impressed by Johnny Zaro's 1940 Mercury that George and Sam had restyled previous. With Zaro's Mercury in mind, Nick went out and bought himself a 1940 Mercury Coupe. Nick discussed ideas with George and Sam before the build was started. Nick wanted his car to look different, so they chopped it up and tacked it together in order to find out how low they wanted it. After cutting the post out of the top, Nick liked what he saw, and he told George that he didn't want to put the post back. With this in mind, George came up with the design for the curved hardtop windows.[2] The post was replaced with smoothly hand-curved 3/8 inch channel stock. The fixed channels were later chrome plated. The custom side-window trim complemented the graceful arc of the chopped top and completely changed the character of the car. This trick would be copied numerous times on other customs throughout the years, and can also be found on later Barris creations such as Bob Hirohata's 1951 Mercury. George did also fabricate and paint the side window channels.[3] In 1949 the hardtop body style was also introduced by GM on Buick, Cadillac and Oldsmobile. The design was well received by the public, and probably also a great source of inspiration for the Matranga Merc. The top was chopped 5 inches in the front, and 7 inches in the rear. Before Nick Matranga's Mercury, Sam had also chopped the tops on Johnny Zaro's 1940 Mercury and Al Andril's 1940 Mercury, so he knew the procedure. In order to get the chop perfect, Sam Barris and Nick worked on the roof together for almost a year[3]. The top was the first thing they modified on the car. When they had tack-welded the roof back together they stood back and looked at it, deciding that it almost looked too low. The windshield opening was just a slit. While studying the car George came up with the idea that they should cut the windhsield opening up farther into the top.[1] This modification made the height of the windshield match the height of the side windows.

The trend at the time was to fit cars with a full-width Cadillac grilles, but Nick insisted on sticking with the stock front end.[1] Rear and front bumpers and bumper guards on the car came from a 1946 Ford. The rear bumper guards were placed further from the center on the bumper, and modified to house taillights formed from transparent red Lucite. Both front and rear fenders were molded to the body, as was a 1946 Ford splash pan. All emblems and handles where removed, and the doors were opened using solenoids hidden in the running boards. The fender skirts were borrowed from a 1941 Buick.[1] The stock side trim was shortened a few inches on the hood. Nick drove around with the car in primer for some months before he painted it, he did that in order to get the bugs out of it before he sealed the bodywork with a glossy paint. After some months Barris tore the car apart, and had it painted in a 1941 Buick maroon with gold over black lacquer.[3] George painted the car. He started 11:00 one night, and worked until 4:00 the next morning. A major lowering job included tunneling the floor for driveline clearance.[1]

Inside the car featured a fully chromed dashboard. Nick Matranga and Jesse Lopez hand formed the dash inserts from red plexiglass. jesse learned Nick how to work with plastic, and he helped Nick create the taillights as well.[2] The steering wheel of the car came from a 1950 Mercury Monterey. The interior and trunk was upholstered by Glen Houser's Carson Top Shop in white and deep red naugahyde with black carpeting. Total cost of the upholstery job was $325.[1] The car rolled on wide white walls with 1950 Cadillac Sombreros mounted on red wheels.

By the end of 1950, after 15 months of hard work, the car was finally done. Sam did 99% of all the work on the car, and it was usually done after Nick got off work in the evenings.[2] Not long after completing the build, uncle Sam called and sent Nick off to Korea. Before Nick went away he sat the car on jacks in his mothers garage.[1]

While Nick was away, George Barris took the car to different shows such as the 1951 National Roadster Show in Oakland. George found a customer for the car while Nick was away, so he asked Nick's mom if he would sell it. Nick later told Karpo Murkijanian that he didn't think he was comming home so he wrote his mom to sell the car.[3] Nick sold the car for $1800 late in 1951.[1]

On a rainy night early in 1952 the new owner lost control of the car while street racing it over some railroad tracks in San Pedro, and hit a telephone pole. The owner walked away, but the Matranga Mercury was totaled. The dash was buckled and the remainder was declared a total loss. [1] When Nick Matranga came home from Korea the first thing he did was to tell George he wanted to buy the car back, but it was too late as the car was destroyed.[3]

The Matranga Mystery I

Who was the new owner, that crashed the Matranga Mercruy on a rainy night? After researching the accident back in 2011 we came across a newspaper article in The Independent, Tuesday, January 8, 1952, that described an accident that took place in Artesia, January 7, 1952; "Driver Injured As Car Hits Pole, Mailboxes - An Artesia youth was injured, an Edison Co. pole sheared off and four mailboxes wrecked when an automobile went out of control in the rain early yesterday at 168th St. and Pioneer Blvd., Artesia, deputies reported." The driver was 19 years old Stanley James Hannenberg of 16511 Pioneer Blvd. His 1939 Coupe was wrecked in the accident Deputies Leo J. Coffey and R.H. Kipper reported. The Edison Co. pole was broken off at ground level and split halfway up! Who was Stanley James Hannenberg? Was he the new owner of the Matranga Merc? Please get in touch with Kustomrama at mail@kustomrama.com if you have more info on Stanley or the Matranga Mercury.

In the late 1980s Aaron Kahan was looking at the just finished Stardust custom, "which was the coolest early Merc at the time!"A guy was looking at the car next to Aaron, and he struck up a conversation with him. He said, "I know where the Matranga Merc is." Aaron tried not to get too excited, "but I would have killed to have the Matranga Merc back then," Aaron told Kustomrama in 2017. "His story was that it was in a junkyard in the Pacific Northwest. It was supposedly pretty much destroyed after being hit by a train. Over the years I've asked people about this. I never got a good answer from anyone. Maybe the car was crashed in SoCal and the remains ended up in the Pacific Northwest? I'd love to know the whole story. The guy knew what he was talking about and what he described was the Matranga car. He described subtleties that not many people new. Was it another similar car or the Matranga?"[4]

Please get in touch with us at mail@kustomrama.com if you have additional information or photos to share about Nick Matranga's 1940 Mercury.