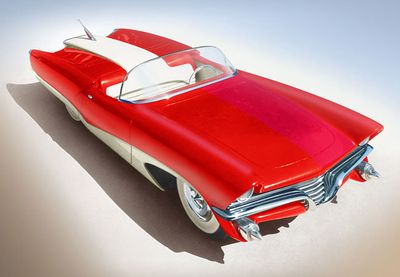 This is the model Milton entered in the 1955 Fisher Body Craftsmans Guild. He won a scholarship with the model, and GM wanted to display it in their Motorama road show. The Studebaker was bought with money Milton received from GM. Photo courtesy of Ron Will, from Dean's Garage. 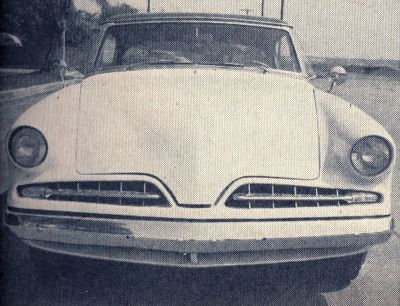 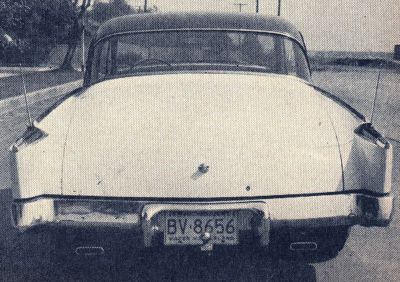 1953 Studebaker owned and restyled by Milton J. Antonick of Mt. Vermont, Ohio. Milton bought the car with money he had received from GM for a model car he had entered in the 1955 Fisher Body Craftsmans Guild. He won a scholarship with the model, and GM wanted to display it in their Motorama road show. The Studebaker was purchased from a dealer lot in Detroit in June of 1956 for $600. He drove it back to Mt. Vermont, and restyled the car during the summer. The Studebaker was Milton's second custom attempt, as he had previously restyled a 1948 Plymouth coupe. Milton restyled the Studebaker using 1954 Studebaker inner grille bars, the stock chrome grille shell was molded into the body, and the headlights were frenched. Rear fenders were extended and reshaped to fit 1956 Plymouth taillights mounted in a flat, topside position. The rear of the car also featured dual antennas, and dual exhaust. The guards were removed from the bumper.[1] The original color was green with a grey roof and saddle brown interior. He changed the body color to a Chevrolet off-white with a Titan Red roof, a perfect match to the interior seat color. The accent stripe on the car was also painted Titan Red. Short of Candy Red, Titan Red was the next best thing at the time. Once completed, Milton drove the custom to Los Angeles where he became a student at the Art Center College of Design. During a visit to Barris Kustoms, the car was photographed by George Barris. After receiving numerous offers, Milton sold the Studebaker to Bob Keller in December of 1956. Bob, another student, gave Milton an offer he couldn't refuse, and the car swapped hands for $1450. Unfortunately Bob couldn't drive, and in an attempt to learn he crashed and destroyed the car.

Please get in touch with us at mail@kustomrama.com if you have additional information or photos to share about Milton J. Antonick's 1953 Studebaker.