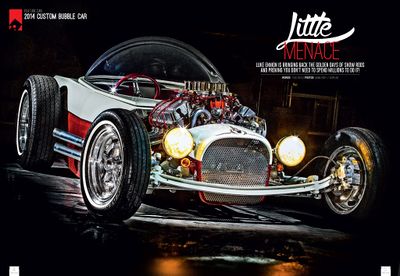 Luke wanted to build something that stood out and brought back that 1960s show car style rather than build something with off-the-shelf parts. Photo courtesy of Luke Ennion. 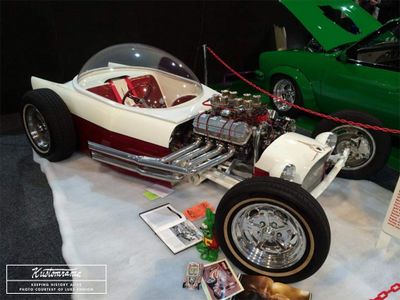 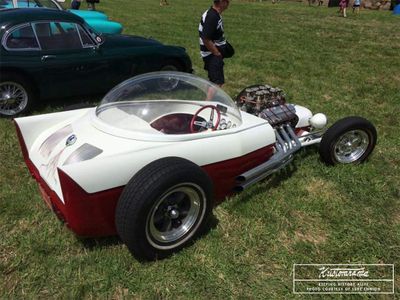 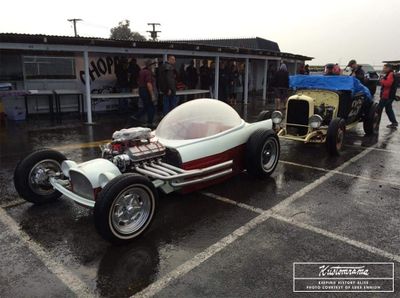 The Little Menace is a bubble top show rod from Auckland, New Zealand. Built by Luke Ennion, a member of the Pukekohe Hot Rod Club, the build was started in 2010 and completed in 2014.[1]

Luke originally got the urge for building a hot rod after attending a car show in Pukekohe in 2005. A bare-steel Model A pickup at the show ignited a spark. His dad had a T-bucket body hanging in a shed, and a chassis to go with it under the house. The body and frame were mocked up before Luke added a Model A front axle, an eight-inch rear end, and a C4 transmission. Wanting a low-slung look, Luke later scrapped the original frame and went on to construct his own from 75 x 50 mm box-section tubing. The new frame received a 5-inch kick up up front, and a 15-inch kick up in the rear.[1]

During the build, Luke got an apprenticeship with New Zealand Steel, and the project was put on ice for a few years. Around 2010 Luke discovered that he didn't really want a T-bucket after all, as there were too many around. Turning the bucket into a show car was now the way to go. A show car with a bubble top. Luke wanted to build something that stood out and brought back that 1960s show car style rather than build something with off-the-shelf parts. Built on a budget, an old Ford Anglia was butchered for body parts. Rear quarters, door skins, and dash panel. Using 8mm and 10 mm round bar as a skeleton to get the right shape, the body parts were soon mocked up on the T-bucket chassis, ready to be stitched together. The dash ended up as a rear panel, housing four Thunderbird taillights.

The build received a 351 short block that Luke got from an uncle. It was dropped off to Franklin Engineering for machine work before Peter Woodward assembled it. It was hopped up with match-ported heads, parts from Comp Cams, and an Aussiespeed Quad Weber manifold. Luke knocked up a pair of headers for the build himself.

Luke was determined to build a functional and road-legal car, so a radiator was tucked away in the rear along with an electric fan. Cambrian Plastics, a boatbuilder, provided the bubble top. Luke choose MK II bonnet hinges as the opening and closing mechanism for the top along with a hydraulic pump from an old boat motor. Matched with an alarm remote, the top opens and closes at the push of a button. Luke's brother Dave helped out with the bodywork, before the show rod went to Menzies Car Painters for primer. Luke decided to get the car running in primer before tearing it down for final paint. Good friend Clint Woolford gave it a two-tone glow-in-the-dark white and Metalflake paint job, while Dean Coley dressed it up with traditional pinstriping. A matching interior was made with help from Perrett at Audio and Upholstery. It was dressed up with Auto Meter gauges and a Metalflaked steering wheel. With help from good friends, Luke could finally complete the four-year build in 2014.

In April of 2020, Luke decided to advertise the one-of-a-kind car for sale. It is registered as a 1969 Ford 105E Anglia, and he wants $45,000 USD for it. Luke can assist with the shipping, which is approximately $7,000 USD from New Zealand to USA. Feel free to reach out to Luke Ennion at franklinspeedshop@yahoo.com for more information or details.

Please get in touch with us at mail@kustomrama.com if you have additional information or photos to share about Luke Ennion's Little Menace.