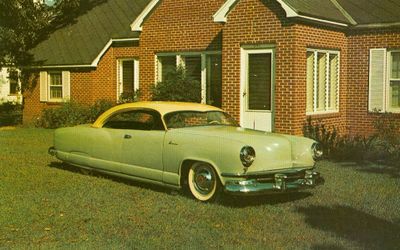 A postcard featuring the Johnson Special. According to a newspaper story about the car that appeared in The Dothan Eagle, February 5, 1953, it all began in 1925 when Loma O. Johnson was in Miami and saw a souped-up custom-built car. "Right there on the spot he began dreaming of building one for himself someday." 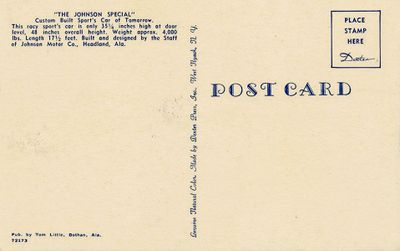 The back of the postcard. 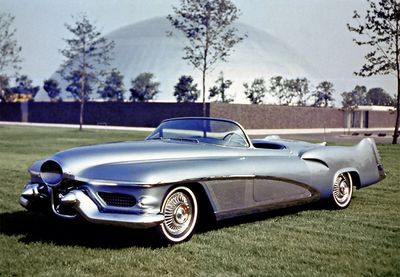 According to a story published in The Dothan Eagle, June 25, 1953, inspiration for the build came from the 1951 GM LeSabre concept car. 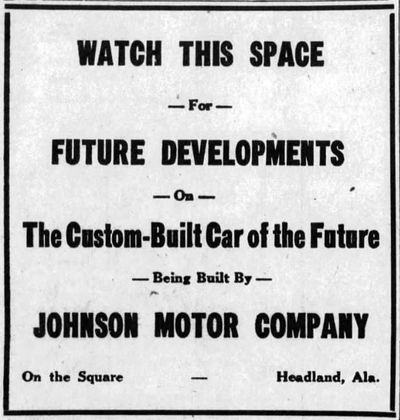 Watch this space for future developments on The Custom-Built Car of the Future. An ad for Johnson Motor Company that announced the spectacular build. The ad appeared in the Wiregrass Farmer, December 18, 1952. 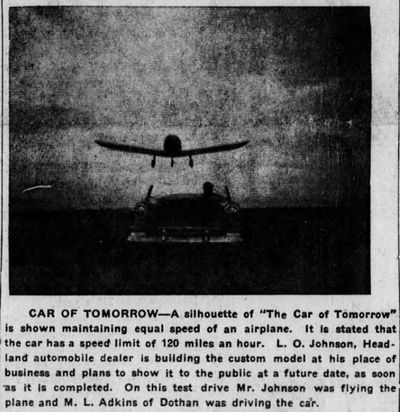 The Car of Tomorrow! A sneak peek of the build appeared in the Abberville Herald, January 1, 1953. 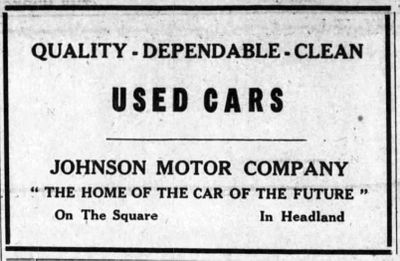 Another Johnson Motor Company ad that mentions the Car of the Future. This appeared in Wiregrass Farmer, January 29, 1953. 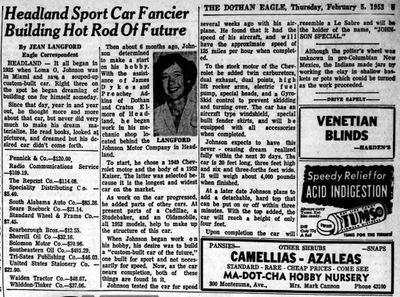 Headland Sport Car Fancier Building Hot Rod of Future. The car received a lot of local publicity. This story about the in-progress build appeared in The Dothan Eagle February 5, 1953.

Getting close to completion. Another story about the car was printed in The Dothan Eagle, June 25, 1953.

1952 Kaiser custom built and designed by the staff at Johnson Motor Co., a used car dealership and auto parts business, in Headland, Alabama. Known as "The Johnson Special," the car was also shown and presented as "The Car of Tomorrow."

According to a newspaper story about the car that appeared in The Dothan Eagle, February 5, 1953, it all began in 1925 when Loma O. Johnson was in Miami and saw a souped-up custom-built car. "Right there on the spot he began dreaming of building one for himself someday." More than two decades passed before Loma, in mid-1952, decided it was time to start the build. Loma was an interesting guy, and besides having the used car and parts businesses, he was a pilot, was on the Headland City Council, owned rental apartments, was an amateur photographer, and he had pet monkeys.[1] According to a story published in The Dothan Eagle, June 25, 1953, inspiration for the build came from the 1951 GM LeSabre concept car. With the assistance of James Dykes, Preacher Adkins, and Cretus Elmore, who all worked for L.O. in his agency, he began working on the car in his mechanic shop located behind the Johnson Motor Company in Headland.[2]

A Custom-Built Car of the Future

A 1952 Kaiser body was located for the build and mounted on a 1949 Chevrolet chassis. The oldest part on the car was a Ford Model T cross-member that supported the frame at the rear. Loma selected the Kaiser body because it was the longest and widest car on the market. Originally a four-door sedan, the rear doors on the Kaiser were welded shut, making the car appear even longer. Parts from a 1952 Cadillac, a 1952 Studebaker, and a 1952 Oldsmobile helped make the structure of the car. According to the article in The Dothan Eagle, February 5, 1953, Loma's desire was to build a "custom-built car of the future." At the time, the build was getting close to completion.[2]

Built for Sport - Not Necessary for Speed

Power came from a 1949 Chevrolet motor that ran twin carburetors, dual exhaust, dual points, high lift rocker arms, an electric fuel pump, special heads, and a Gyro-Skid control to prevent skidding and turning over. Elmore milled the head down for his boss to give it more compression. Johnson tested the car for speed with his airplane, and he found out that it had the speed of his aircraft, with an approximate speed of 125 miles per hour. The car ran six tailpipes and a Powerglide rear end.[2]

In June of 1953, almost a year into the build, the Johnson Special was almost completed, only missing a detachable top and a new paint job. Once completed, the build was only 35 1/4 inches high at the door level, with a 48 inches overall height. The body was five inches from the ground, the weight was approximately 4,000 lbs, and the length was 17 1/2 feet. It featured a chopped and detachable hard top and an aircraft-type windshield. The fender skirts were custom-built, and it ran whitewall tires and Cadillac Sombrero hubcaps.[2] Inside, the seats were trimmed in yellow and green.[3]

Please get in touch with us at mail@kustomrama.com if you have additional information or photos to share about Loma O. Johnson's 1952 Kaiser - The Johnson Special.