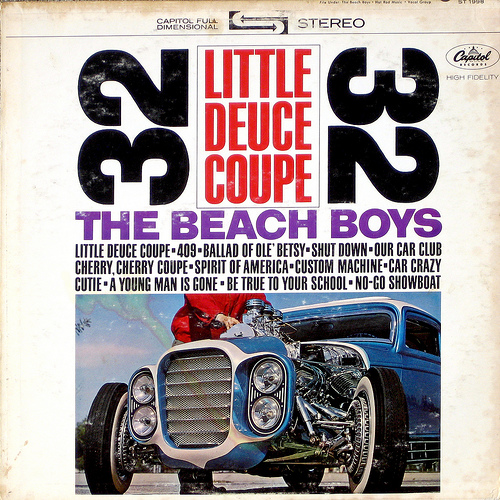 "Little Deuce Coupe" is a song written by Brian Wilson and Roger Christian. The song first appeared as the b-side to The Beach Boys' 1963 single "Surfer Girl". It was released on the Surfer Girl album and then again as the title track of the album Little Deuce Coupe.

The picture featured on the front sleeve of the album was supplied by Hot Rod Magazine, and features the body of hod-rod collector Clarence Catallo and his own three-window 1932 Ford Coupe - known forevermore amongst hot-rod enthusiasts as 'the lil' deuce coupe'. A full shot of Catallo and his car from the same photo shoot appeared on the front cover of the July 1961 edition of Hot Rod Magazine, and whilst Catallo himself passed away in 1998 the car still tours the showrooms and exhibitions to this day.

Please get in touch with us at mail@kustomrama.com if you have additional information or photos to share about Little Deuce Coupe.