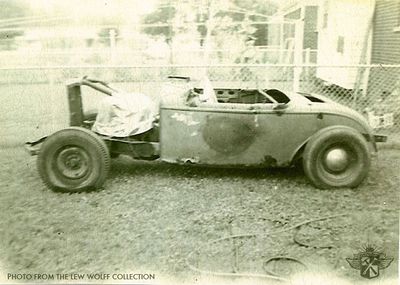 The roadster as it looked in 1954 when Lew bought it. It was advertised as a Model A roadster, but it consisted of a 1932 Ford roadster body with a 1940s Buick front frame, engine and suspension welded to a 1932 Ford frame. The drivers door was welded shut, the trunk lid was a piece of sheet metal and the steering column was held with a rope. Photo from the Lew Wolff collection, provided by Louis Lapham. 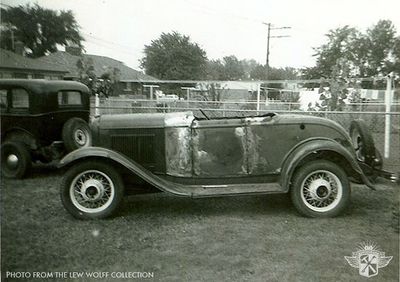 A photo of Lew's roadster taken in his backyard around 1955. This photo was taken before he got a garage for the car. Progress has been made, and the roadster body has been mounted on the frame from the sedan shown in the background. Photo from the Lew Wolff collection, provided by Louis Lapham. 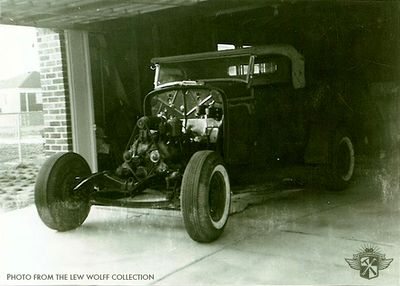 A photo of Lew's roadster from later on in the 1950s, still fit with a flathead V-8.. By now Lew has finally gotten a garage that he could work on the car in. Photo from the Lew Wolff collection, provided by Louis Lapham. 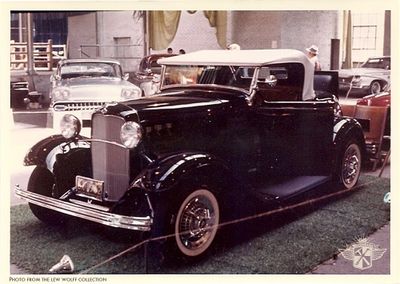 The first black version of Lew's roadster at an indoor show in Toledo, Ohio or Buffalo, New York. Photo from the Lew Wolff collection, provided by Louis Lapham. 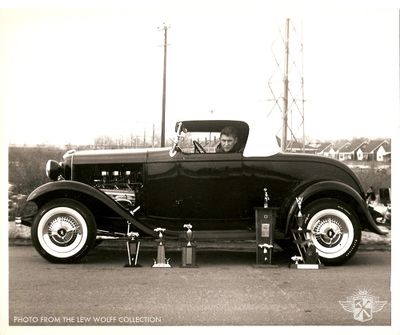 Lew's award winning roadster as it appeared around 1960. Photo from the Lew Wolff collection, provided by Louis Lapham. 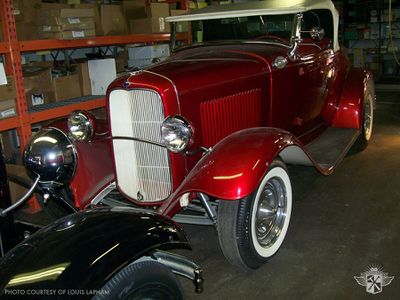 Lew's Ford as it sat in 2007. The candy red paint is the same paint as Lew and a friend applied in a garage in the early 1960s. Photo courtesy of Louis Lapham. 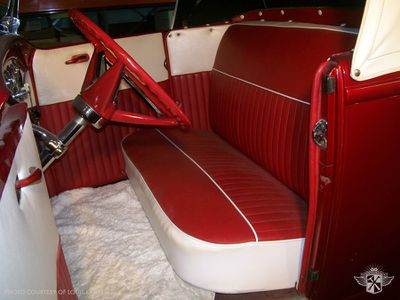 The interior that Ray Kulakowski made for the car in the early 1960s is still in the car and looks brand new. Photo courtesy of Louis Lapham.

1932 Ford Roadster owned and built by Downriver Modified member Lew Wolff of Wyandotte, Michigan. When Lew bought the roadster in 1954 it was advertised as a Model A roadster. He went to check it out, and what he found in a backyard in Detroit was a 1932 Ford roadster with a 1940s Buick front frame, engine and suspension welded to a 1932 Ford frame. The drivers door was welded shut, the trunk lid was a piece of sheet metal and the steering column was held with a rope. He bought the car, dragged it home, and started to build it in his backyard in Downriver. During the build Lew bought a nice flathead V-8 powered 1932 Ford Sedan that he used the frame and engine from. Later on, Lew also got a little garage that he could build the car in. The first version of the car, painted glossy black was completed in 1958 or 1959. After completing the car, he toured it in some Easter US shows featuring Chevrolet or Dodge Lancer hubcaps. At one of these shows Lew took Best Paint award beating the Alexander Brothers. Later on it received a Candy Red paint job by Lew and a friend, and a brand new interior upholstered by Ray Kulakowski. The candy paint was applied in a garage. In 1963 Lew won the Best Hot Rod award at the Detroit Autorama with the roadster. At the time, Lew ran the experimental garage at the Ford Test Track in Dearborn on nights. He knew Passino, the head of Ford racing, and asked if he could get one of the new Fairlane 221 V8s to put in the roadster. The big three scraps millions of dollars in cars and parts every year, so one motor was really no big deal. He turned Lew down, so Lew built up a small block Chevrolet engine for the car to show specs. The upshot for Lew was that he won a brand new 427 Ford motor at the Detroit Autorama, something that pissed Passino off. As Lew went on the road for Ford after winning the engine, it went into storage, and it was never installed in the roadster. Later on, the roadster was featured in Hot Rod Magazine March 1964.[1]

After Lew went full blown show with the car the roadster didn't see much street action. In 2012 Lew still owned the roadster, and it appeared almost in the same condition as when it won the Best Hot Rod award at the 1963 Detroit Autorama.[1]

Please get in touch with us at mail@kustomrama.com if you have additional information or photos to share about Lew Wolff's 1932 Ford.