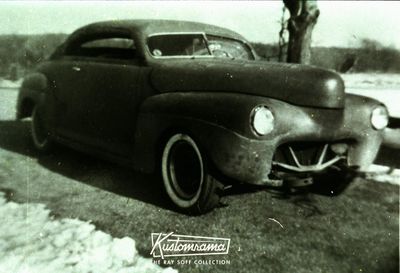 An early custom by Les. The 1941 Ford in the photo has been chopped and hardtopped. Photo from The Ray Soff Photo Collection, courtesy of Les Dunham. 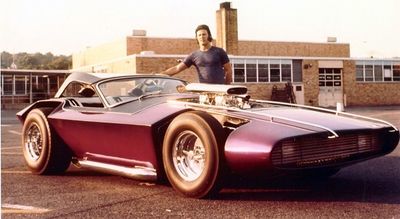 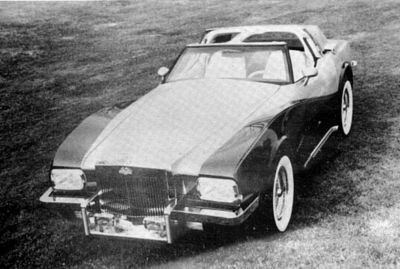 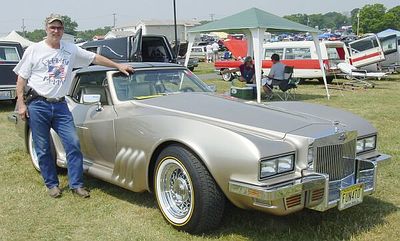 Les Dunham is a legendary East Coast customizer from Boonton, New Jersey. Dunham was born in 1941, and began customizing cars 16 years old. In 1957 while he was still in high school, and before he was old enough to have a license he had already began to customize cars. In the beginning, before he opened up Dunham Coach, Les worked out of his fathers' garage. Typical customers in the beginning were upper classmen wanting Les to nose, deck or fill trim holes on their cars. By the time Les got his driver license, he had a fully customized 1949 Ford four-door. Another car he worked on while in school was a 1951 Ford convertible. After a couple of incarnations, the 1951 Ford turned out pretty wild, and landed Les the cover of Customs Illustrated January 1961. The car was les' daily driver in his senior year of school. Shortly after graduating, Les bought another shoebox, a 1950 Ford sedan this time, that he turned into a sectioned pickup truck.[1]

After a stint in the Army, Les opened up his shop Dunham Coach in Boonton in 1962. Once settled down in his shop, Les restyled the sectioned Ford pickup another time. The second incarnation of the truck was dubbed "Agent 008". After building the "Agent 008", Les built a show rod called "The Scorpion". Les drew the "The Scorpion" in his history class while in high school, and once completed, it was probably the first East Coast show rod.[1]

By the mid 1960s, customs were dying out, and Les began to customize motorcycles instead. About the same time he was also building modified Cadillac Eldorados in a style that would be known as "pimp cars". The 1971 movie "Superfly" featured one of Les' pimp cars. Les had now found a new successful path, and he became known as the guy who made Superfly cars. In 1973 he put the body of a Cadillac Eldorado on a chassis of a Corvette. He named his creation the Corovado, and the car was later used in the James Bond movie "Live and Let Die". Seven Corovados were built in total. [2] In 1977, Les started another project based on a Corvette, the Caballista. The Caballista was a hand-fabricated car, and 50 cars were built between 1977 and 1982. Most of the Caballistas were exported to Arab countries. During the early 1980s, exporting of goods to Arab countries stopped, and Les had to once again find another niche. Les began creating a line of fiberglas components that would transform a pickup into the look of a "big rig" or semi.[1] In 2005 Les did a comeback on the market for extraordinary custom cars, and presented Caballista #51. With some modern refinements, Les planned to relaunch the Caballista.[2]

Please get in touch with us at mail@kustomrama.com if you have additional information or photos to share about Les Dunham.