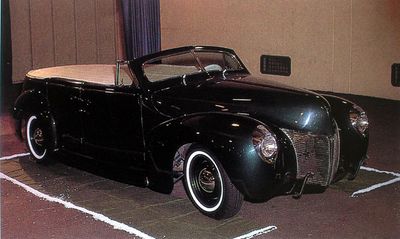 Photo From The Andy Southard Collection 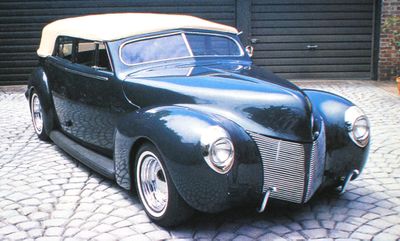 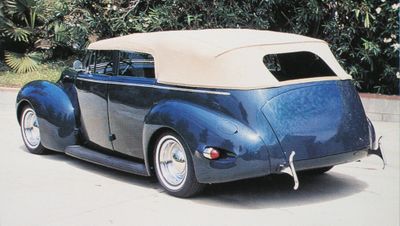 1940 Mercury 4-door Convertible restyled by Valley Custom for Larry Sanford. This is rumored to be the last custom rolling out of the Valley Custom Shop.[2] Larry bought the Merc when he was just 15 years old in 1953. He drove around with it for a while until 1958, when he decided to have Valley Custom to restyle it.[3] The body was sectioned 4 inches from the top portion of the doors, rolling the tops to meet the window openings. The rear doors and back cowl section were done the same way. The deck lid was sectioned three inches and the beltline was completely removed. The windshield was chopped three inches.[4] The side trims on the hood were removed and a lot of rough spots were smoothed out on the body. All the handles were shaved. The stock bumpers were replaced by nerf bars. Special taillights were installed in the rear fenders. The Merc sported a 283 1958 Chevrolet engine with a 1958 Chevrolet rear end. The air cleaner was custom made by Larry's brother, Earl Sanford.[3]

Four decades later, Larry had Bill Hines to fresh up the car. Eddie Martinez redid the interior in tan leather and covered the top with matching canvas.[3]

Please get in touch with us at mail@kustomrama.com if you have additional information or photos to share about Larry Sanford's 1940 Mercury.