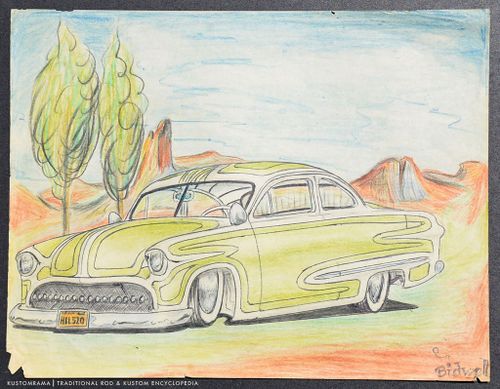 One of Bidwell's many design proposals for his own 1950 Ford Coupe. In 1959, as a freshman in high school, Doyle met Howard Gribble, who was also drawing his dream custom cars on school notebook paper. They quickly became friends and encouraged each other in their automotive art. The result was a sizable archive of those drawings that have survived to this day. Photo courtesy of Howard Gribble. 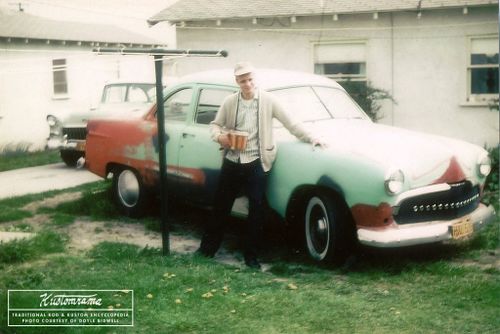 A construction photo of Bidwell's 1950 Ford taken circa 1959. When this photo was taken the car had been nosed and decked. The spinner in the grille had been eliminated, and the car had received a custom grille similar to the one in the drawing. Unfortunately, funds, and experience was limited, so the build was never completed. Photo courtesy of Doyle Bidwell, provided by Howard Gribble.

1950 Ford Coupe designed by Doyle Bidwell of Torrance, California. Bidwell drew this custom sometime around 1959, as a high school freshman. At the time he was busy restyling his own 1950 Ford Coupe, and this design shows what kind of ideas he had planned for the car. The body has been nosed, decked, and shaved for door handles. Gone is the huge spinner in the grille, and the car has received a hood that goes all the way down to the molded-in grille surround. The headlights have been hooded, like on a 1955 Chevrolet, and the hood corners have been rounded. A custom grille, made from mesh and bullets have been installed inside the modified grille opening. The top seems to be chopped mildly, and the side trim has been shortened. When it comes to the paint, the car has been given a striking white and green panel paint job. It has a forward rake, and Bidwell has dressed it up with a white rolled and pleated interior, dual spotlights and full Moon discs. Too cool for school!

Please get in touch with us at mail@kustomrama.com if you have additional information or photos to share about Kustomrama Styling Studio no. 10 - 1950 Ford.