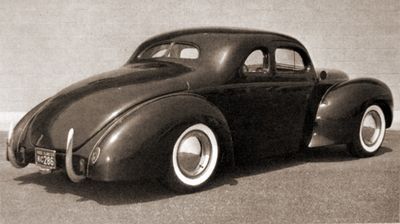 The first version of the coupe as it appeared after Hank Fournier had restyled it for Ken Costello. Photo from Rik Hoving's Custom Car Photo Archive[1] 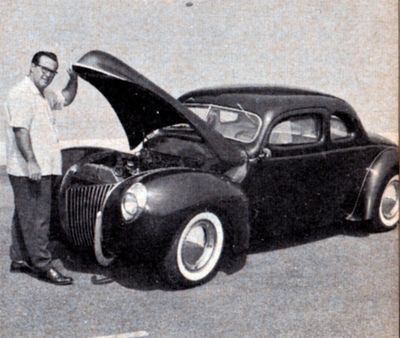 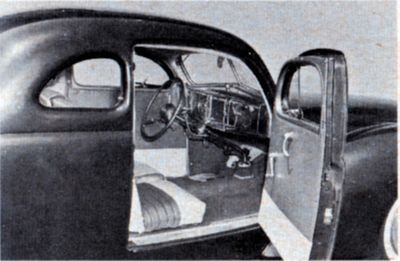 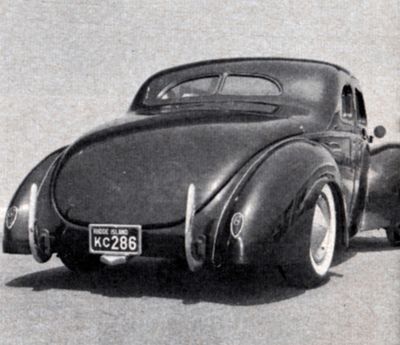 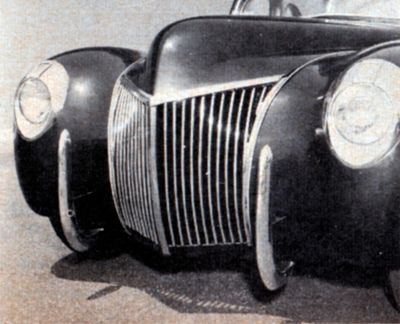 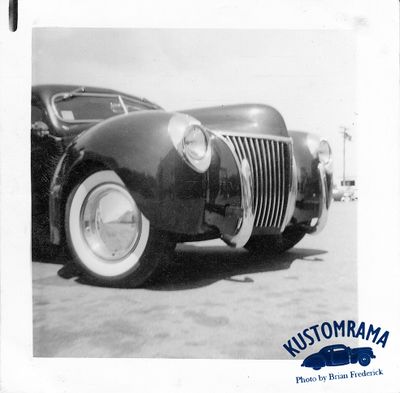 Ken's coupe at an outdoor car show held by the Piston Poppers of Littleton in 1959. Photo from The Brian Frederick Photo Collection. 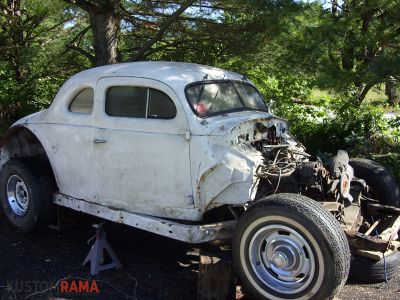 The coupe as it looked when Willy dragged it home in April 2010. Photo provided by Jan Ouimette. 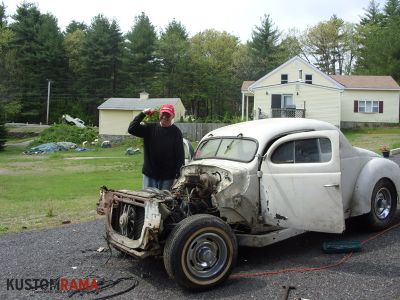 How Willy felt when he first began to work on the car. Photo provided by Jan Ouimette. 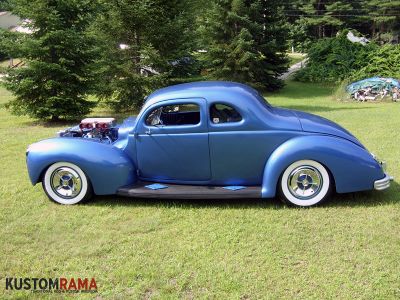 The newly restored coupe as it sat in June 2011. This version featured a temporary carburetor and air filter box. Photo provided by Jan Ouimette. 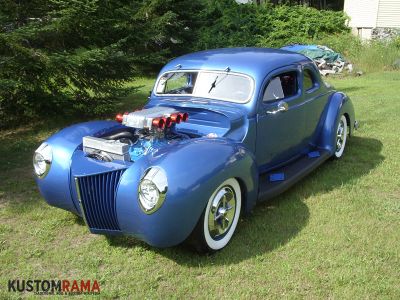 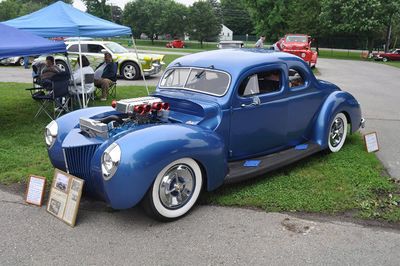 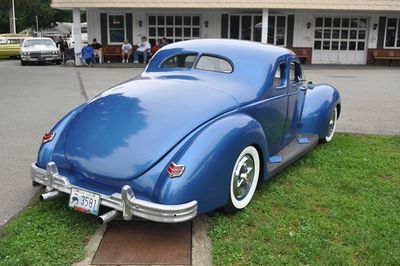 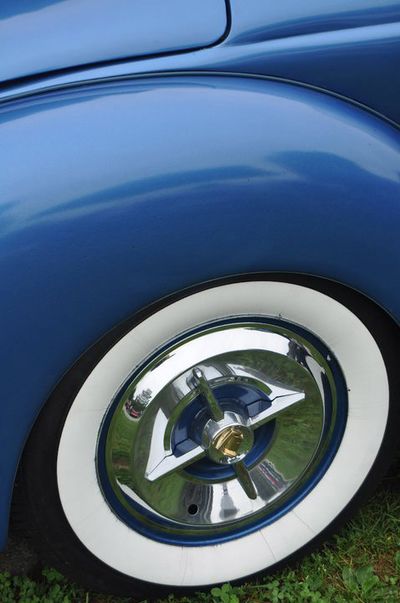 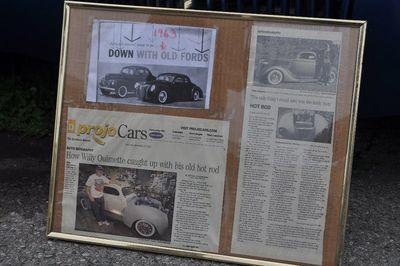 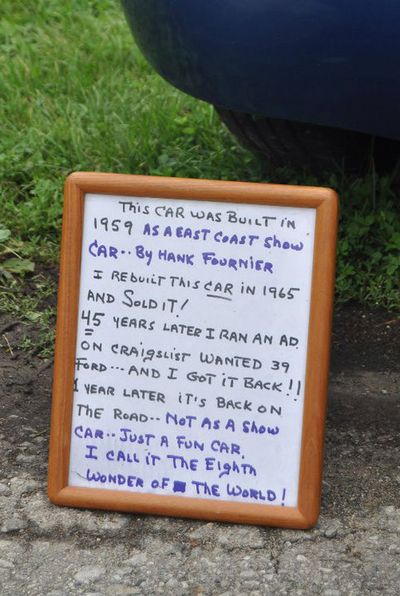 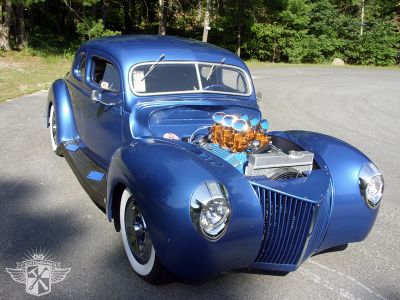 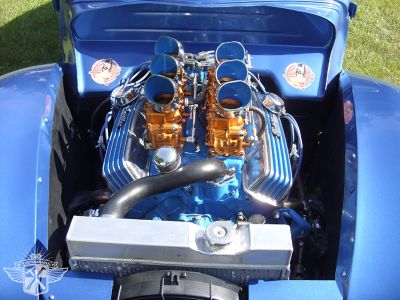 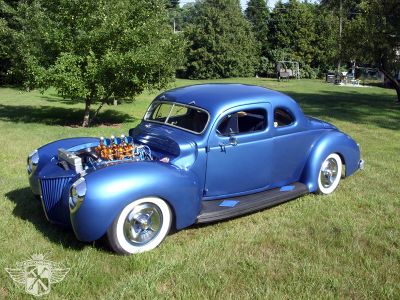 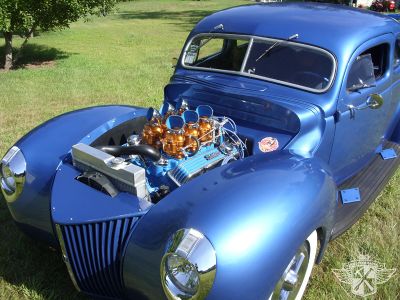 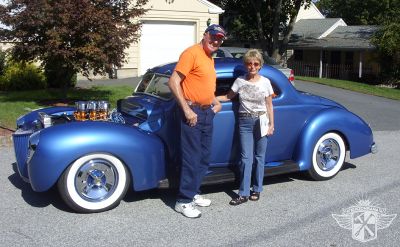 Willy Ouimette and Karen Langlois next to the coupe in October, 2011. Karen was the wife of the coupe's second owner, Wally Langlois, who passed away in 2010. Phot by Jan Ouimette.

1939 Ford Coupe originally restyled by Hank Fournier for Ken Costello of Cranston, Rhode Island. The build took 8 months, and was completed in 1959. The top on Ken's coupe was chopped three inches, and the body was channeled over the frame. A six inch section was removed from the hood to match the body channeling. It was lowered in the rear by Z'ing the the frame 3 inches. Up front a forged axle was used to lower the coupe. The door and trunk corners were rounded, and the door handles and side trim were shaved. The doors and trunk were electrically operated. The bumpers were removed, and replaced by 1952 Pontiac bumper guards mounted vertically. A stock 1950 Cadillac engine provided the power. The restyled body was painted pearlescent blue, and the interior was upholstered in blue and white. The second owner of the coupe was Wally Langlois. Wally received the car as a gift from his grandmother when he was 17 years old. She offered him the choice of the car or a college education. Wally sold the coupe to its third owner Phil St Jean in 1962, as Wally and his wife Karen were having their first child.

On a cold October day in 1965 Willy Ouimette spotted an old car in a backyard while driving down a backroad in Warwick, Rhode Island. It was a chopped, channeled and sectioned 1939 Ford coupe, and Willy knew right away that it was the radical former show car that had been built by Hank Fournier. When Willy found the car, it had been through three or more short term owners. The paint was faded, the chrome was rusty, and the motor was missing, but Willy knew he could bring it back. $300.00 later, and the deal was made. Willy fixed the coupe up, and redid it without the Pontiac bumper guards. In the rear he installed a 1949 Plymouth station wagon bumper that he had bought from a local junkyard for $10.00. It was also fit running boards that were covered by diamonds. The 6x9" diamonds were made out of material that matched the color of the body, and fastened with covered buttons. A new 283 Chevrolet engine with an Offy 6-carb intake was chosen as power plant, and new whitewall-tires and a set of Dodge Lancer hubcaps were bought and installed. After many hours of work, the car was back on the road looking great again. Willy's version of the coupe was completed without hood. Willy and his wife Jan Ouimette had two small girls at the time. They were living in a rental house, and had been talking about buying a home. Money was tight, so when a friend offered to buy the Ford, Willy decided to sell the coupe. Willy and Jan now had a deposit on a 6 1/2 room ranch house in Rhode Island. The mortgage was $100.00 a month, but the car he loved and had to sell often crossed his mind.[2]

Willy never forgot the old custom, and 45 years later he decided to put an ad on Craigslist looking for it. The ad read-"Wanted: '39 Ford Coupe. Chopped, channeled, and sectioned. Built by Hank Fournier in 1959. Rebuilt by Willy Ouimette in 1965. Looking to locate and buy back this car and return it to its' former glory. Willing to pay a guaranteed generous finder's fee." A week went by -no calls. Then, on a Sunday afternoon, his friend, Tommy Dwyer, called to say," Willy, I can't believe you're looking for this car. I know exactly where it is located." He gave Willy the information. It was less than 10 miles from his home. The man had owned the Ford for 45 years, having bought it from the person Ouimette sold it to in 1965. It had been locked in his garage the majority of that time. He said the car held too many memories for him to ever sell for any amount of money. Willy was devastated. But, during the conversation, he told him about the other 15 street rods and custom cars he had in his collection: a 1962 Chevrolet Corvette, a 1936 Ford 3-window coupe, a 1936 Ford Cabriolet, some tri-5 Chevy's, and a 1957 Ford Thunderbird, a good daily driver. The next night the phone rang. He and his girlfriend had decided they were interested in swapping the 1939 Ford for the '57 T-Bird. BINGO! A trade was made and the old custom car was Willy's once again. But again, time had taken its' toll. The frame was trashed, the motor and transmission were junk, the floor and sub-rails were non-existent, the fenders were junk, and the hood was missing. Work was started on the car again, and Willy decided to give it the same look as it had in 1965. A new fully boxed custom frame was put under the car. The frame had to be Z-d in the front and rear to fit under the heavily modified body. Six super duty cross members were also installed. Side crash bars were hidden in the doors and rear quarters, and 1/16" steel floors were welded in place. A rebuilt and modified Corvette motor was installed along with power brakes and power steering. The power options were requested by Jan, who also drives the old custom. A custom rear one-piece gravel pan was made in the rear, and four new fenders, grill, and running boards were installed along with a rare rear bumper from a 1949 Plymouth station wagon. Once the bodywork was done. Willy painted the car Cobalt Blue, the same color that Hank Fournier had painted it in 1959. Willy turned 70 on December 8, 2010. During the restoration, he worked 5-6 hours a day, 6 days a week. He did all the work himself-welding, body work, paint, wiring,etc. When Willy builds a car, he builds it so that it can be driven anywhere. The car was therefore rebuilt with many safety features such as radial tires, safety belts, a third brake light, a good heater, and a CD player. The restored version of the coupe was completed in the summer of 2011, and Willy drove it 500 miles to the 2011 Goodguys East Coast Nationals in Rhinebeck, New York for its debut. At the show, Willy won the radical custom "Low Lid" award with his old coupe. In 2012 Willy's Ford was the only Rhode Island car to be featured in the NSRA Yearbook. [2]

Please get in touch with us at mail@kustomrama.com if you have additional information or photos to share about Ken Costello's 1939 Ford.