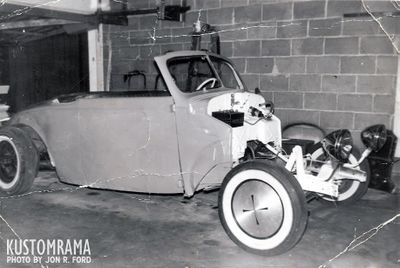 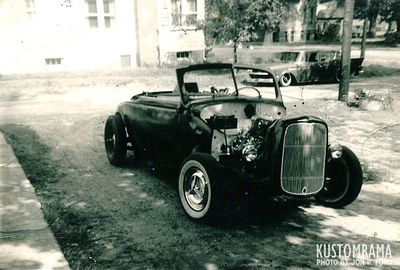 A photo of Jon's Ford taken in 1959. Jon's radically lowered 1959 Rambler can be seen in the back of the photo. Photo courtesy of Jon R. Ford.

1937 Ford cabriolet owned and built by Jon R. Ford of La Porte, Indiana. The Ford was Jon's first car, and he got in 1957, when he was 13 years old. Jon wanted a hot rod, so he removed the hood and fenders and installed a 1932 Ford grill. It ran a 1948 Ford flathead V-8 that was hopped up with an Edelbrock 3 carb intake manifold and a LaSalle gearbox. The build was completed sometime between 1957 and 1959, and Jon dressed it up with Oldsmobile Fiesta hubcaps; "I drove it all over without a plate, but my grandfather was Mayor of the town, so they left me alone" Jon told Sondre Kvipt of Kustomrama in 2014.[1]

Please get in touch with us at mail@kustomrama.com if you have additional information or photos to share about Jon R. Ford's 1937 Ford.