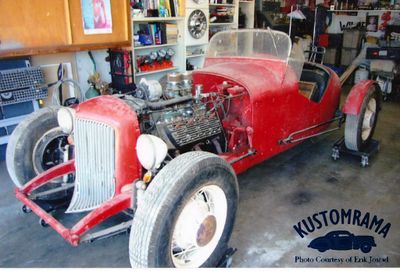 The DeSoto as it sat in 2009 when John's grandson Shawn sold it. Photo courtesy of Erik Jostad. 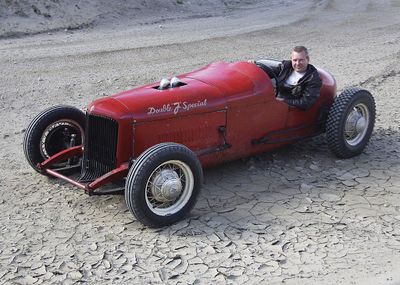 Erik Jostad with the Double J Special in the Summer of 2013. Photo by Ronny Krabberød. 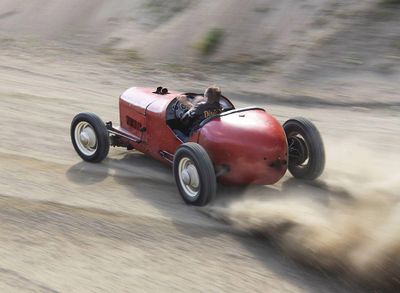 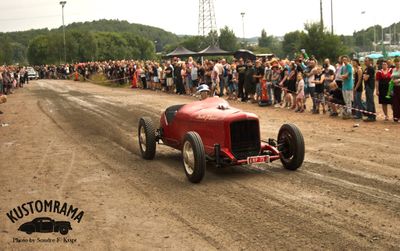 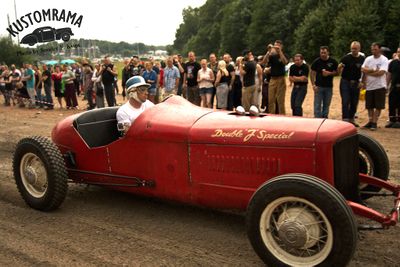 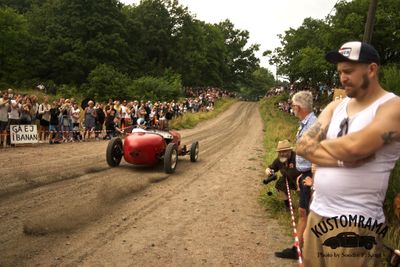 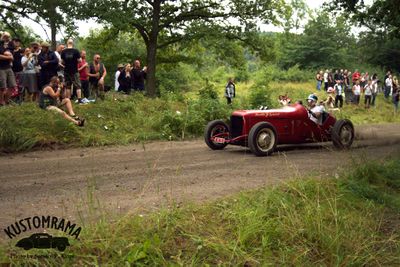 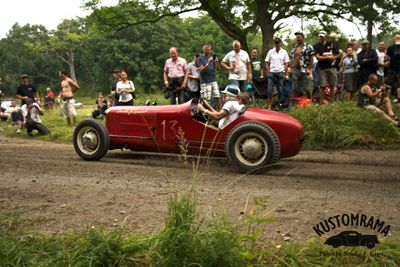 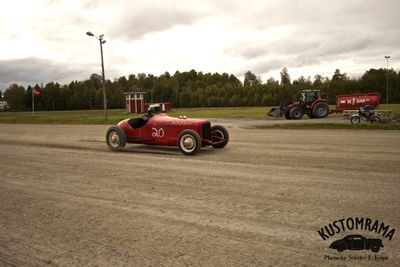 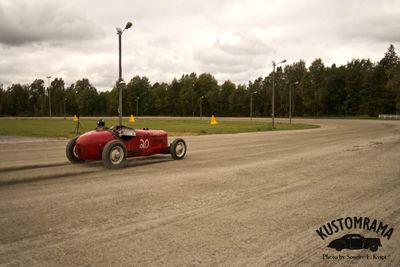 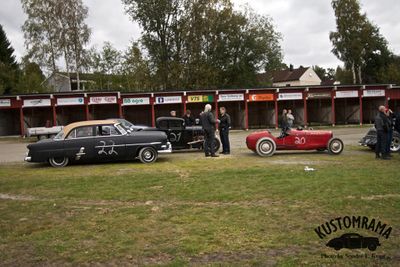 The DeSoto in the pit area at Kala Speedway. Photo by Sondre Kvipt - Kustomrama. 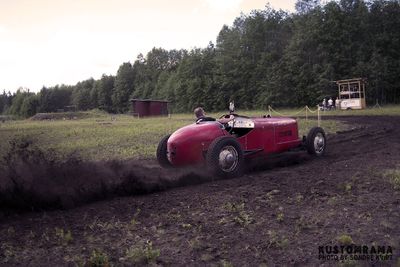 1929 DeSoto racer built by John W. Campbell of Issaquah, Washington around 1953. The build was based on a 1929 DeSoto chassis that John fit with a 1930s DeSoto steering box. The front suspension consisted of a DeSoto leaf and a 1937 Plymouth axle. A Ford Model A transverse leaf spring provided suspension in the rear. The transmission and torque tube came from a 1935 Ford. The brakes were hydraulic and came from a 1940 Ford. It was powered by a 24-stud Ford V-8 flathead that featured a 4" crank and big cams as well as handmade headers and rare finned iron Kogel HiComp heads.[1]

The body was handmade, and it is a mixture of fiberglass and alloy. Once completed, John raced the DeSoto up and down the West Coast for three or four years. In the 1960s it went into storage. At the time it had been titled as a 1929 DeSoto, and it was driven on the street.[1]

In the 1970s, John's grandson Shawn updated the car with a Muncie 4-speed, a 10-bolt rear end, fenders, a windshield and more. He used it as his high school transportation before parking it again. The car stayed in storage until 2009, when Shawn sold it to Don Ennis of Seattle, Washington for $ 5 000.[2] In 2011 the car swapped hands again, and Don sold it to Bill Hair of California. Bob Gregg of Santa Ynez, California bought the car in 2012. Bob advertised it for sale on eBay. Erik Jostad of Maura, Norway stumbled across the ad in February of 2013. He fell in love with the old race car and decided to buy it. Erik teamed up with Brad Jenkinson of Jenkinson Concours and Customs, and the duo restored the DeSoto.[1]

A quick trip was made to Santa Ynez to pick up the car. Erik planned to drive it back to Brad's place, but a crack in the engine block prevented that trip from happening. A full race Isky cam was installed in the rebuilt engine. The engine was bored .060 over and it was fit with a 4" Mercury crank. As the rare Kogel heads didn't have the valve reliefs to run the cam, a pair of Edelbrock heads were installed. The intake is a Edmunds dual with two Stromberg 97 carburetors. The original carb base's were two different colors, red and black, and were left that way. The ignition is vintage Mallory dual point. Two 1940 Ford brake cylinders were installed, one for the clutch, and one for the brakes. The steering box is believed to be circa 1930s DeSoto. The column is a modified 1939 Ford column. 1940 Lincoln brakes were installed up front while 1940 Ford brakes were installed in the rear. The transmission is a late 1960s Muncie 4-speed close ratio box. The rear end is a quick change unit hung in a Model A rear leaf spring. The restoration was completed in two months. Rex Coperman at Rex Upholstery of Escondido re-upholstered the restored version of the car. Inside, the racer features an aluminum covered wood dash fit with the original Stewart-Warner gauges. The steering wheel is from a 1939 Ford. The restored version of the car runs on 16" Kelsey-Hayes wire wheels that Erik fit with 6.00-16 and 6.50-16 Blockley tires.[1]

The car was shipped to Norway in 2013, and Erik and Brad has raced it at several events such as the Devil's Peak Hillclimb at the 2013 A-Bombers Old Style Weekend and the Headbanging authentic drag race in Finsterwalde, Germany. At the 2013 A-Bombers Old Style Weekend, Pekka "The Wizzzard" Mannermaa lettered "Double J Special" on the hood of the car for Jostad & Jenkinson.[1]

Please get in touch with us at mail@kustomrama.com if you have additional information or photos to share about John W. Campbell's 1929 DeSoto.