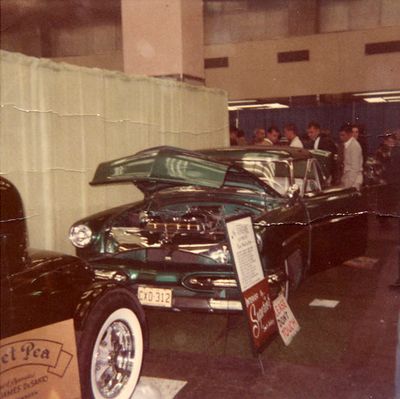 Photo from the Anthony White collection. 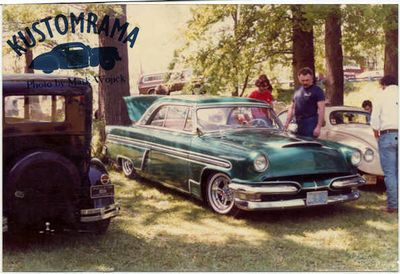 Photo by Mark Wojcik, from The HAMB.

1954 Mercury originally owned and restyled by John Paszik. John built the Merc as a teenager in the 1950s. it took him years to build, and he kept it in primer until it was done. John learned the trade by working for some of the better customizers in the area, applying the skille to his own car. Once the bodywork was completed, the car received a paint job by Tony Bruskivage, one of New Jersey's premier customizers in the 1950s. The paint job was a present from John's father. Mark Wojcik, who worked for John in the 1970s, believes Tony mixed his own paint using a Kaiser color and raw pearl powder. Leo of Superior Interiors upholstered the Merc while John was working for him.[1]

One completed, the car went on to do the indoor show circuit on the East Coast at the Renegade. It won major awards and sweepstakes for a few years. As the cars had to have changes done every year to be eligible for the show circuit, the Merc went trough several changes. Wide whites and caps turned to mag wheels with double pin whites. White pearl scallops were added, the skirts were removed, a chromed T-Bird was added and so on. When the custom car craze died off, John kept the Merc. He still drove it every now and then. When Mark Wojcik met him in the 1970s, he still drove it one in a while.[1]

Over the years, John's business ebbed and flowed. He eventually had problems keeping up with work, staying focused on things, and having personal problems. He went from shop to shop, until he lost it all. In the process, he wound up selling his Merc to a good friend to get out of some trouble. His father bought it back for him after a year, or so, but in another year, the same problems came back, and it was sold again. It went trough a few hands, staying local. Mark Wojcik helped Matty Wade, one of the owners, to bring back the 1950s touches to the car. They reinstalled skirts that Mark was able to match the paint of the car on, and installed Cadillac hubcaps and wide whites. Matty sold the car to Tico Torres, Bon Jovis drummer. Tico still owned the car in 2004.[1]

Please get in touch with us at mail@kustomrama.com if you have additional information or photos to share about John Paszik's 1954 Mercury.