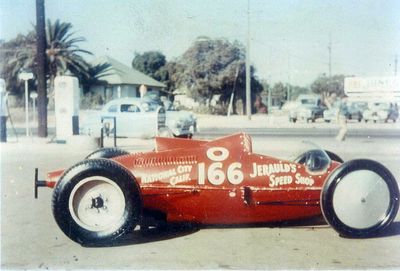 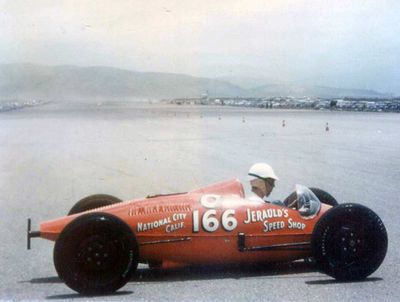 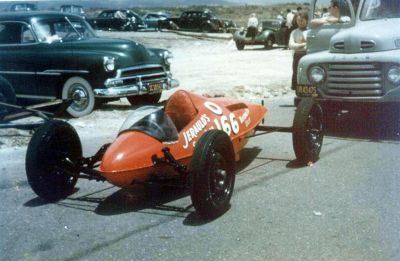 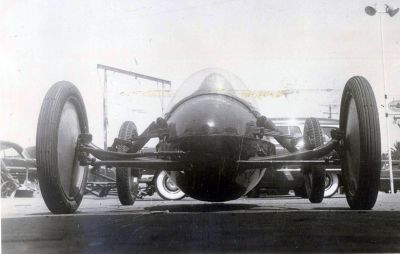 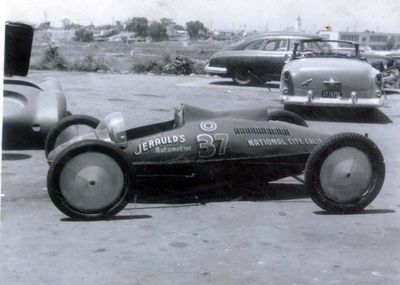 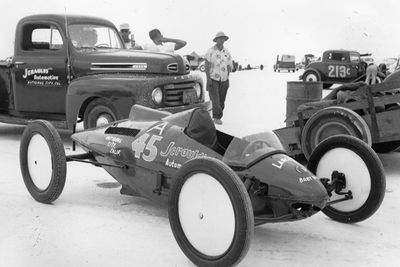 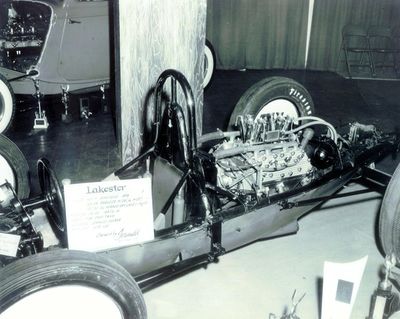 The Jerauld-Barber P-38 Belly Tank was built by Al Jerauld and George Barber over a two year period. Known as the Baby Bomb, due to its small tank body & it's small displacement engine, the build was completed in the early months of 1951. The Baby Bomb weighted 990lbs having a chrome moly frame and a 82 inches wheelbase.[1]

In 1952 Al and George ran the tank at the Bonneville Nationals. It was sponsored by Jerauld's Speed Shop of National City, California and ran as #166 in the "O" class. The Baby Bomb was powered by a 1937 Ford V8-60 Flathead that had been destroked .100" and the bore was sleeved down to 2.135 inches, giving the motor a tiny 88.75 cubic inch displacement. The car had 80 hp at 5800 rpm. Running an Edelbrock manifold with two Stromberg carburetors using nitro fuel they ran 115.53 mph that year. November 10-16 the same year the belly tank was displayed at the 3rd annual Motorama at the Pan Pacific Auditorium in Los Angeles, California.[1]

In 1953 the Baby Bomb was clocked at 123.11 mph in the "O" class at Bonneville. Jerauld told everyone he was running on purple fuel. All of his competitors wondered about what this purple fuel consisted of, and the truth was that it was only nitro that Jerauld had put purple dye in too fool everyone.[1]

In 1954 they ran again at Bonneville in the "A" Class with # 45 on the side. They took 4th in the "A" lakester class. This year the car said Jeraulds Automotive on the side.[1]

Later Al and George removed the sleeves and took the cubes up to the stock 136 cubic inch displacement. They also ran a fuel injection that they had fabricated. With this set-up the belly tank clocked its fastest speed of 160.14 mph at the 1956 Bonneville Nationals in the "A" lakester class. Jerauld claimed he could have gone 170 mph if he had a taller gear.[1]

Please get in touch with us at mail@kustomrama.com if you have additional information or photos to share about Jerauld-Barber's Belly Tank.