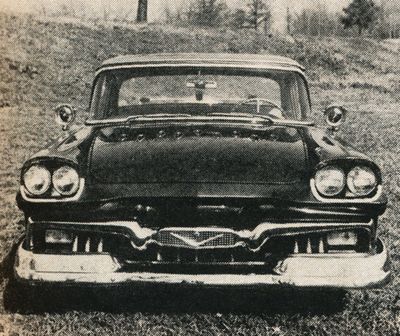 1957 Ford Fairlane Club Sedan owned and restyled by James Ray of Birmingham, Alabama along with Bob Collins, shop foreman for George Starres' Body and Paint shop. James bought the car new in January 1958 and began customizing it immediately. The eye-catching Ford featured a 1956 Plymouth grille bar and parking lights with Studebaker grille teeth on the splash pan. which fit the front quite nice. Quad headlights from a 1957 Chrysler were installed. The car was nosed, decked and shaved for handles to give it a cleaner appearance. The louvered hood, doors, windows, seats and radio antenna were electrically operated. Hood and door corners were rounded and airscoops were made on the hood by using Buick portholes. The rear fenders were extended 17 inches, with taillights made from 1949 Pontiac speaker grilles which were recessed 2 inches.. A continetal kit was fit between the extended fenders. In able to get the right stance, the car was lowered 5 1/2 aft and 3 1/2 in front. The gray and red leather interior luxuriated in top-drawer upholstery underlaid with channeled foam rubber. A tape recorder, TV, phonograph, cocktail bar and a P.A system were installed to increase comfort. The dashboard was fit with a set of Stewart-Warner gauges. Lakes plugs which routed through the body and Turn Pike cruiser skirts were final touches that James added. Once the bodywork was done, it was painted Titian Red, Juneau Gray and white. Right after it was finished, James sent a picture of it to Custom Cars Magazine, requesting them to show it in their magazine. The car hauled in a dozen of show awards all over the country.[1] In 1958 Bob's Buick was nominated as one of 28 "Top Customs of the Year" in Motor Life July 1958.[2]

Please get in touch with us at mail@kustomrama.com if you have additional information or photos to share about James Ray's 1957 Ford.