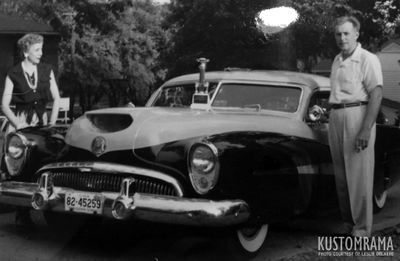 Jack Crabbs and his wife Marge with the Black Flame. In 2016 the trophy in the photo was still in the Crabbs family. Photo courtesy of Leslie DeLaere. 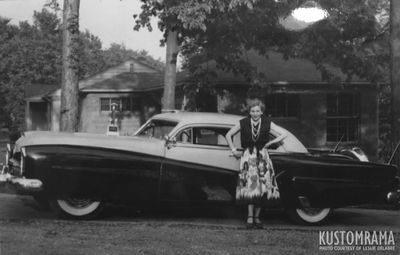 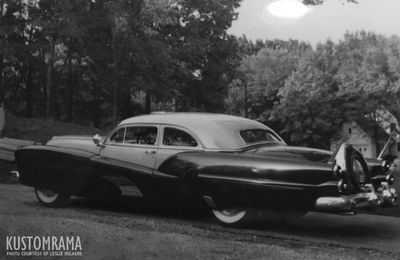 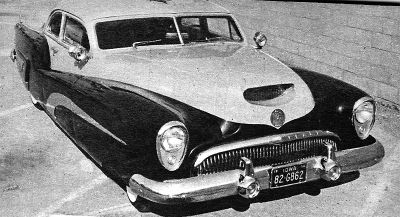 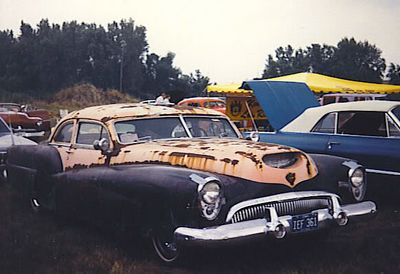 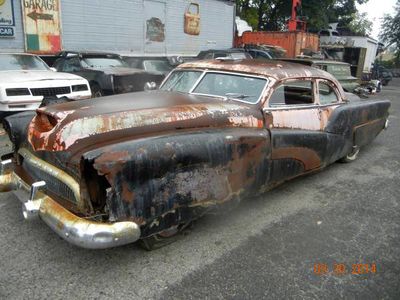 The Black Flame as it sat when it was advertised for sale on Craigslist in October of 2014. The asking price was 8000 USD, and the car was located in Worcester, Massachusetts. 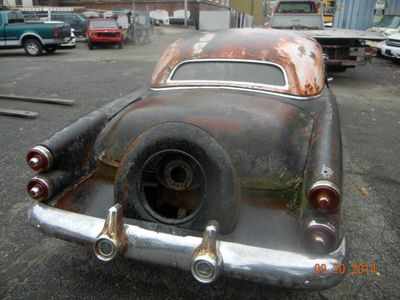 1948 Buick Roadmaster restyled by Dunshee's Body Shop for Jack Crabbs of Bettendorf, Iowa. The car was known as the "Black Flame", and Jack's intent was to build and market a low scale production custom car for wealthy people, like the Kurtis Cad and the Muntz of the same time. When he tried to obtain permission from GM he was told that no matter what he did the car was initially a Buick, and the permission was denied.[3]

Built between 1953 and 1956, the build took 3 years to complete.[4] Most of the work was done by Eddie Bell and his helper Bill Gartenier. The four door Roadmaster was converted into a two door. Both front and rear wheels on the car were concealed. The body was sectioned four inches, channeled 3 inches and the top was chopped 4 inches. The top was widened 8 1/2 at the front and made removable. Front-end assembly of the car tilted forward for easy access to engine for servicing. The trunk compartment was enlarged by installing a specially constructed continental tire setup. Top left taillight was pulled out for access to gas filler.[5] Once the bodywork was done, the Black Flame was painted black and pink.[3]

Eddie Bell, who did most of the work on the car while working for Dunshee's Body Shop, bought the car before he passed away. In 2013 the car was still around, for sale, but it was in a bad condition, needing a full restoration.[3] In October of 2014 the car was advertise for sale on Craigslist. It was located in Worcester, Massachusetts, and the asking price was 8000 USD.[4] The car was still for sale in March of 2015. By then the price had been lowered to 3975 USD.[6]

Please get in touch with us at mail@kustomrama.com if you have additional information or photos to share about Jack Crabbs' 1948 Buick.