A photo of J.R.'s customized 1940 Chevrolet coupe. Built around 1950-1951, the car gained national recognition when it was featured in Trend Book 101 Custom Cars. 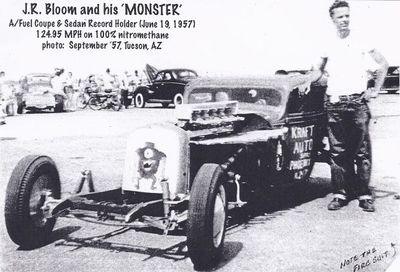 A photo of J.R. with his "Monster", taken Septermber 1957 in Tucson, Arizona. Photo courtesy of Gasser Magazine. 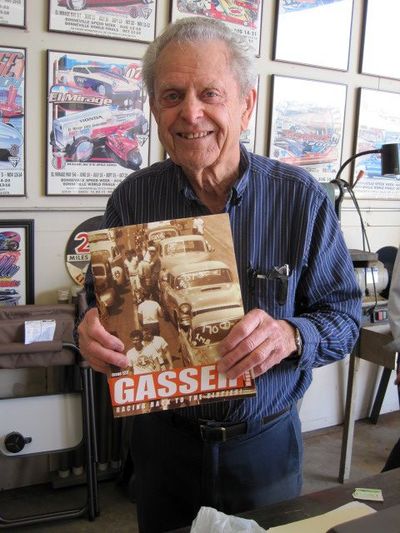 J.R. Bloom of Phoenix, Arizona. J.R. is a pioneer when it comes to drag racing and customizing in Arizona. In 1953 J.R. began shooting drag race photos. He eventually became the track photographer for 5 drag strips and for 12 years he was the official photographer for the American Hot Rod Association.[1]

J.R. began customizing bicycles in his teens. In 1944 he rode around Buckeye, Arizona on a bicycle that featured a Studebaker steering wheel instead of handlebars. He was challenged by a student to do a late night drag race at Buckeye High School. To prepare for the race, J.R. put a larger sprocket on the bike, and he designed and built leather stirrups for the pedals. J.R. figured this would allow him to both push and pull with his feet at the same time. The drag found place 11 p.m. one night. The distance was one block, and the prize was $2. J.R. was sure he was going to win. However, he hadn't counted on the other boy showing up with a motorbike. J.R. still wanted to go ahead with the race. J.R. figured it would take a while for the automatic clutch to take hold. He was right, and he reached the end of the block a full pedal-bicycle length ahead of the motorbike.[1]

In 1951 J.R. drove a customized 1940 Chevrolet coupe. The coupe was mildly customized, featuring a 1946 Chevrolet grille and front bumper. The headlights were made from the front section of 1950 Chevrolet fenders, and the rear bumper was a 1950 Chevrolet front bumper modified with 1949 Chevrolet bumper guards. The tailights were moved from the fenders to the deck lid. The deck lid release was built from a locking plate of a Chevrolet truck. Power came from a 1947 Chevrolet engine. The build was dressed up featuring a chromed dashboard, single bar flipper hubcaps on the front wheels, and a spotlight on the driver side. J.R. ran blackwall tires on the car. J.R.'s coupe was featured in Custom Cars Trend Book No. 101 in 1951, and according to the article, the build had taken 4 months.[2]

In 1953 J.R. began racing a dual-carb 1948 Chevrolet sedan. After getting beat, he decided that he wanted to go faster, so he and his brother-in-law put "half a Buick" into a 1948 Crosley convertible. The engine was half a Buick engine that had been cut down to fit in a midget. Fellow drag racers were laughing when J.R. pulled to the starting line in Gilbert, Arizona, but he beat them all. Before long local drag racing changed locations and moved to Perryville, Arizona, home of 1955's first NHRA Nationals.[1]

By 1957 J.R. had built a chopped and channeled Bantam coupe that he raced. He found a Buick Roadmaster with 106 000 miles on the straight-eight 320 cubic inch engine and added six Chevrolet Rochester carbs that he stuffed into the little Bantam. The Perryville racers jokingly nicknamed in "The Monster." They weren't laughing when the Monster blew right by them into the winner's circle. The Buick engine was set up to run on 50% nitro and 50% alcohol. According to an interview J.R. did with Gasser Magazine, he started to think "What if I went 100% nitro? And what if I built a roadster body that could be interchanged with the Bantam?" This allowed J.R. to set records in three different sedan classes, and two roadster classes. "I had records in all five classes on different drag strips," J.R. told Gasser Magazine. As early as the end of the 1957 season the "Monster" had claimed numerous records.[1]

He got 28 trophies from 32 races with the "Monster," all using the same old Buick engine. General Motors sent a team of engineers to Arizona to learn how a stock block Buick could take the punishment of running on 100% nitro. J.R. told Gasser Magazine that they sent word back to headquarters that what J.R. was doing was "impossible."[1]

In 1957 Nitro drag racing died when NHRA outlawed anything except gasoline as fuel. As a result of this J.R. parked the "Monster," but kept taking photos.[1]

Please get in touch with us at mail@kustomrama.com if you have additional information or photos to share about J. R. Bloom.