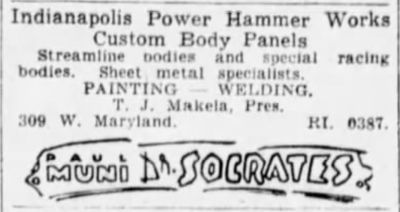 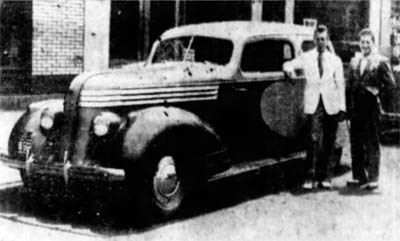 Rudy Makela's 1936 Pontiac of Indianapolis, Indiana. Completed in 1936, the car was restyled by Rudy at Indianapolis Power Hammer Works Inc. 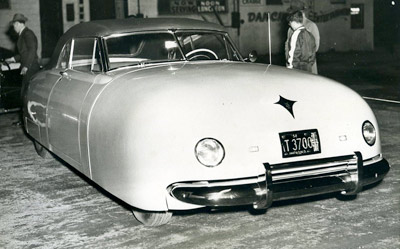 Rudy Makela's 1942 Cadillac convertible of Indianapolis, Indiana. Built by Rudy at Indianapolis Power Hammer Works Inc, the build was started in 1942 and completed in 1950s. 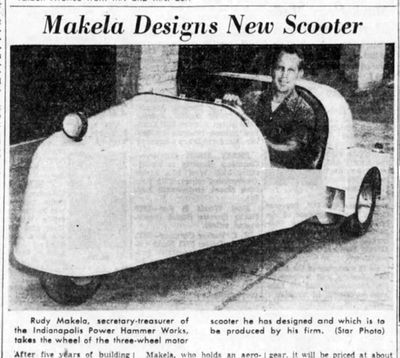 A newspaper clipping from The Indianapolis Star 24 Jul 1955, Sun. After five years of building and testing, Rudy Makela announced in July of 1955 that Indianapolis Power Hammer Works planned to begin production of a three-wheeled motor scooter.

T. J. Makela was born in Finland. He came to Indianapolis from Deotrit, Michigan in 1911. At that time Indianapolis was a central industrial point for many Finnish workers. Hundreds of Finns worked in automobile plants when Indianapolis was an automotive center. In 1940 Mr. Makela told a journalist from The Indianapolis Star that he remembered when there was a considerable colony of Finns in Indianapolis. In the late 1930s many left for Detroit and other automobile manufacturing areas. Makela stayed behind with his wife, a Finnish girl he had met while in Detroit.[2]

By 1950, the shop was run by Rudy Makela, his father, and other members of the family. It was located at 309 W. Maryland St. in Indianapolis.

After five years of building and testing, Rudy Makela announced in July of 1955 that Indianapolis Power Hammer Works planned to begin production of a three-wheeled motor scooter. Powered by an air-cooled, single-cylinder, 6.6-horsepower engine, the scooter was designed by Rudy. According to an article about the scooter in The Indianapolis Star 24 Jul 1955, Sun, two models were built before a third was completed. All work on the scooter had been done in Rudy's spare time.[4]

Please get in touch with us at mail@kustomrama.com if you have additional information or photos to share about Indianapolis Power Hammer Works Inc.