From Kustomrama
(Redirected from WOW)
Jump to: navigation, search 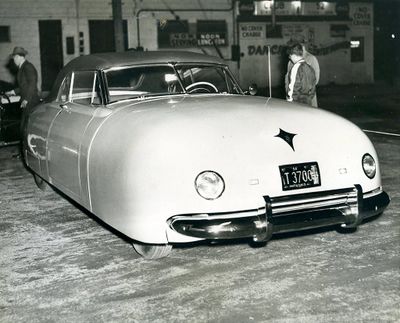 The first iteration of the WOW as it appeared in 1950. Photo courtesy of Geoffrey Hacker. 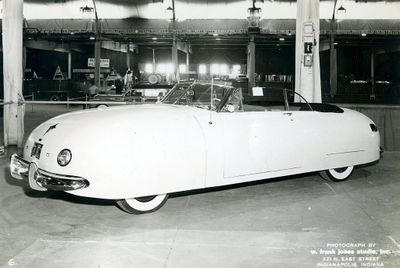 April 27, 1950 The Indianapolis News presented the newly completed build in their newspaper. 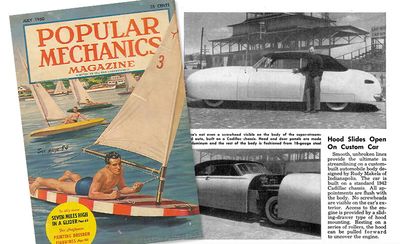 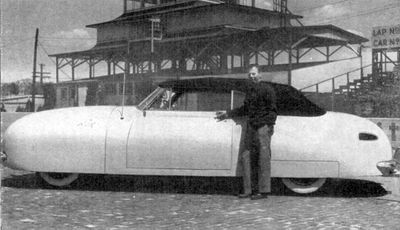 A photo of Rudy and the "WOW" from the Popular Mechanics July 1950 article. 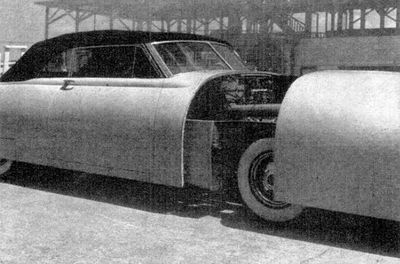 Makela applied for a patent on the idea but was surprised to learn that someone had the same idea for locomotives. The Patent Office turned them both down.

A photo of the car as it appeared when it was featured in Custom Cars Trend Book No. 101. The story wrongfully stated that the build had been completed in 1942. 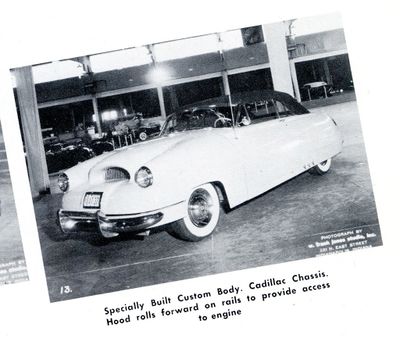 In 1952 a second version of the car was shown at the International Motor Sports Show at the Grand Central Palace in New York. 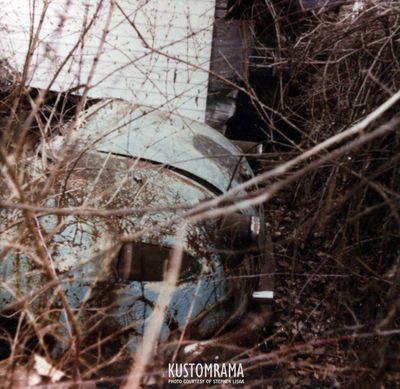 The "WOW" as it sat when Stephen Lisak bought the remains of the old custom in March of 1983. Photo courtesy of Stephen Lisak. 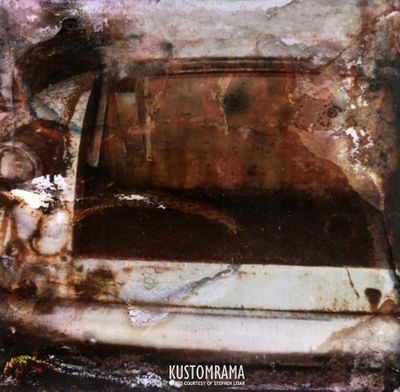 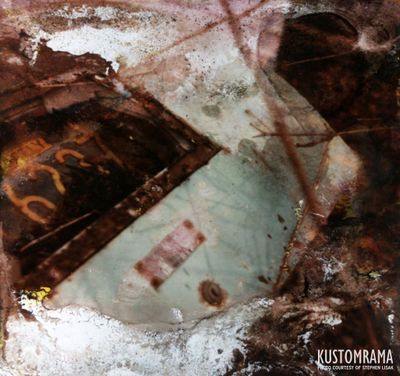 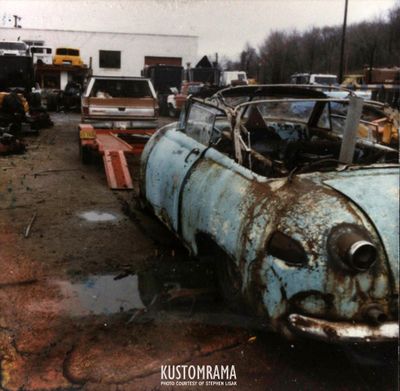 A photo of the car taken the day Stephen came to pick it up from the salvage yard. Photo courtesy of Stephen Lisak. 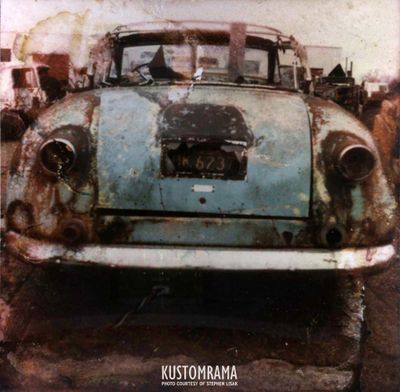 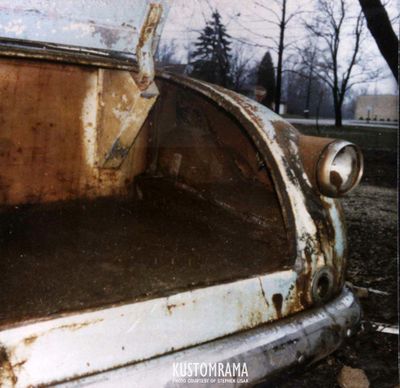 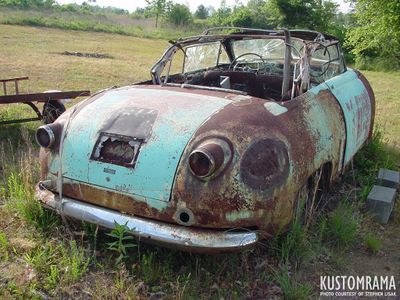 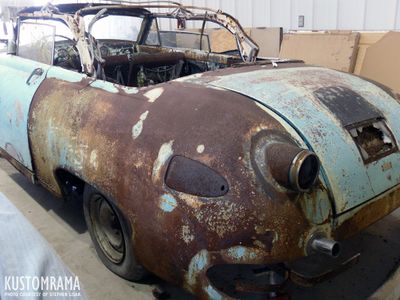 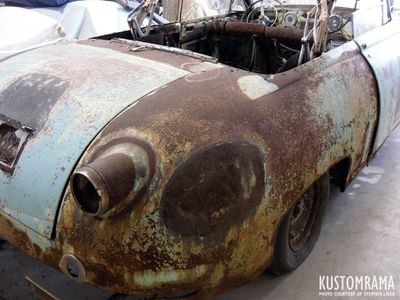 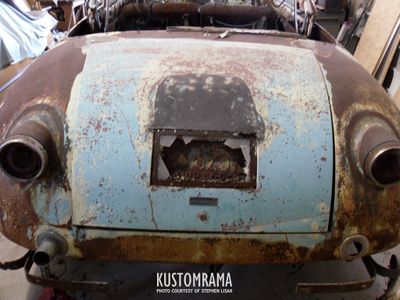 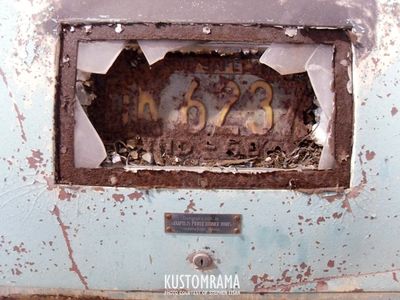 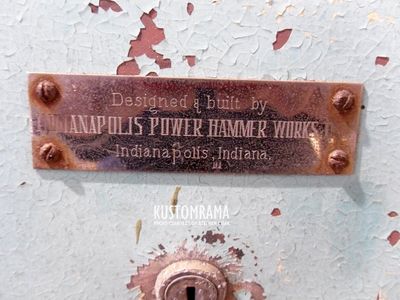 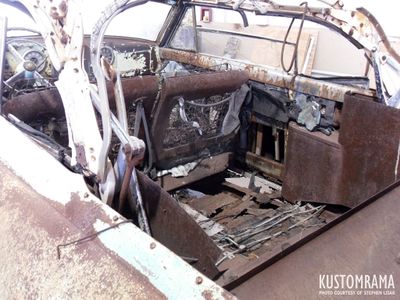 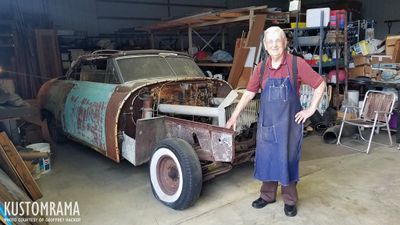 In 2018 fiberglass sports car historian and collector Geoffrey Hacker bought the car from Stephen Lisak. This photo of Stephen was taken in August of 2018, when Geoffrey came to pick up the car. Photo courtesy of Geoffrey Hacker. 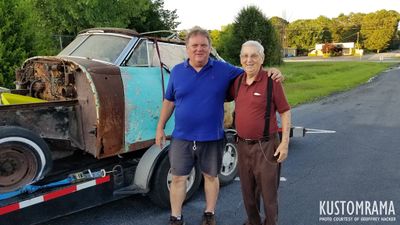 A photo of Stephen and Geoffrey with the remains of the WOW. Photo courtesy of Geoffrey Hacker. 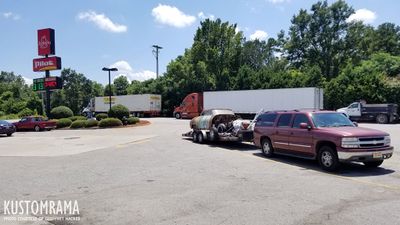 The WOW on its way to its new home. Photo courtesy of Geoffrey Hacker.

1942 Cadillac owned and restyled by Rudy Makela of Indianapolis, Indiana. Rudy was a metalsmith and part owner of the Indianapolis Power Hammer Works, where he worked with his father and other members of the family in making custom orders for body builders.[1]

Named "WOW," Makela first made plans for the car in the early 1940s, but the war held up matters. It was built on a 1942 Cadillac chassis, running a 1942 Cadillac engine. The build was completed in 1950, and according to a story about the car in The Indianapolis News April 27, 1950, the original body had a bad bump in the rear but was in a good shape otherwise. "This helped keep down the cost, but even so Makela figures there's $25,000 worth of work and materials in his WOW, counting his own time."[1]

"Smooth, unbroken lines provide the ultimate in streamlining on a custom built automobile body designed by Rudy Makela of Indianapolis," this is how Popular Mechanics Magazine described the car in their July 1950 issue. Rudy's custom was about the same size as the original Cadillac, and it featured a pull apart hood that rolled forward on tracks instead of lifting up. Makela applied for a patent on the idea but was surprised to learn that someone had the same idea for locomotives. The Patent Office turned them both down. All outside lights and license plates were fully recessed and lucite covered.[2] The hood, doors and rear deck lid were made of ordinary body steel while the others were made from 18-gauge sheet steel. The windshield was curved, indicating that it came from a later model Cadillac.[1] No screw heads were visible on the car's exterior, and the exhaust was routed through the rear panel.[3]

When the WOW was featured in The Indianapolis News April 27, 1950, Makela hadn't found an insurance company willing to issue a policy covering collision, theft and fire.[1]

The One and Only

After the build was completed, Makela destroyed the wood forms used in making the various curved body panels, "What's the use of building a custom-designed body is someone else can one just like it," he told the reporter from The Indianapolis News.[1]

In 1950 the "WOW" was featured in the July issue of Popular Mechanics Magazine. A month later two photos of the car were also published in the August issue of Motor Trend. The photos from Motor Trend where also published in Custom Cars Trend Book No. 101. The story wrongfully stated that the build had been completed in 1942. Twenty spare-time months were supposedly required to complete the job.[2]

Shortly after the build was completed, the car went through some changes. The front wheel wells were started out filled in without an opening. Rudy probably found out that it restricted turning radius movement and then added the cutouts. The front end was also reworked and fitted with a grille, probably due to overheating. In 1952 a second version of the car was shown at the International Motor Sports Show at the Grand Central Palace in New York.[4]

In 1983 Stephen Lisak of Arab, Alabama purchased the car from a salvage yard in Ft. Wayne, Indiana. At the time he was living in the Chicago area, and he was looking for some parts for his 1941 Buick Model 56C. A friend of Stephen tipped him about the car, telling him that he knew about a 1941 Cadillac in a salvage yard which had the same C body. In 2017 Stephen told Kustomrama that he called the salvage yard owner to hear if the car was for sale; "It had been stored at the salvage yard for several years by the Chicago owner. The salvage yard owner talked to the owner, and he decided that he did not want to restore it anymore and they should sell it for him. I purchased it and received a bill of sale for the purchase from the owner. He could not find the title, and I do not know how long he had it." The salvage yard owner told Stephen that the car had been customized in the 1950s. Stephen said OK and bought it unseen because in his mind he imagined a mild custom job, shaved for chrome and door handles.[4]

In March of 1983, Stephen went to see the car in the truck yard. He was surprised to find out what he had bought, but decided to buy it anyway; "What I found was a radical custom car with weeds and small trees growing through it. The car was last licensed in Indiana with a 1958 plate number: DK-6237. The car has a brass nameplate beneath the license indicating “Designed and Built by Indianapolis Power Hammer Works, Indianapolis, Indiana.” The side panels have been slab-sided, and the original doors have been skinned with aluminum panels making them almost one foot thick. The whole back end and trunk deck lid were customized with metal panels and the tag plates recessed with a see-through cover and the exhaust outlets project through the rear bottom body panel. The tag recess was originally up higher on the deck lid, but the tag was too horizontal to be viewed from the rear, so they lowered it to a more vertical position. Another change was to revise the gas tank filler from the left, right side to the left side of the car, possibly to improve drive through gas filling up. Another change appears to add tube type rear tail lights for some reason. The front clip was latched at the firewall with latches operated from inside the vehicle, and the front bumper guards were hinged down to clear for the forward sliding hood on cabinet type rails for access to the engine compartment."[4] The chrome nameplates on both sides of the rear quarter panels are “Cadillac” script that appears to be added later. The doors are about 1 foot thick making the car 80 inches wide. The instrument panel was radically customized. The car was stored outside for several years causing the floorboards to be rusted out. The serial number on the frame was covered with additional sheet metal and is not visible. When Stephen bought the car, the front clip and engine were missing.[4]

In 2017 Stephen advertised the car for sale. It was in a very bad shape, and the front clip and engine were missing. "I still have the custom bumper guards," Stephen told Sondre Kvipt of Kustomrama. "There is a custom made aluminum grille that holds the dual air ducts and stays fixed with the radiator. I have the original radiator and mounting. Apparently, the engine was removed probably for repair and is missing. The engine manifold parts that are left with the car are black enameled or porcelainized castings and the air cleaner etc. were original Cadillac parts. I have been retired for 19 years, and it looks like I will not be able to restore this vehicle. I would like to find a good home with someone who will preferably restore this custom vehicle to its original or updated condition. I believe it would be a rare addition to any collection." Stephen was asking $4000.00 for the old custom.[4]

In 2018 fiberglass sports car historian and collector Geoffrey Hacker of Tampa, California bought the car from Stephen. Geoffrey took delivery of the historic car in August of 2018.[5]

Please get in touch with us at mail@kustomrama.com if you have additional information or photos to share about Rudy Makela's 1942 Cadillac.