From Kustomrama
(Redirected from Hot Lemon)
Jump to: navigation, search 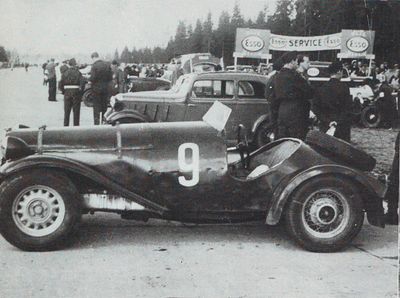 GB1 as it originally looked when Atle Hoff built it. Photo courtesy of Geir Hvoslef. 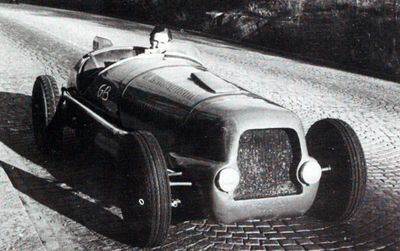 Atle's old racer as it looked after Gunnar Bratlie had turned it into GB1. Photo courtesy of Geir Hvoslef. 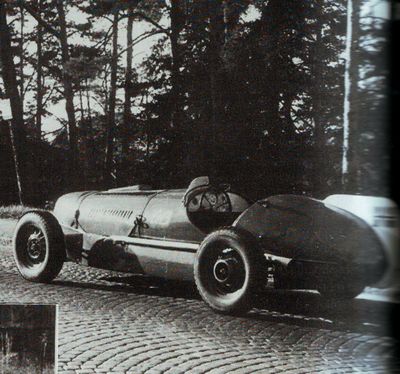 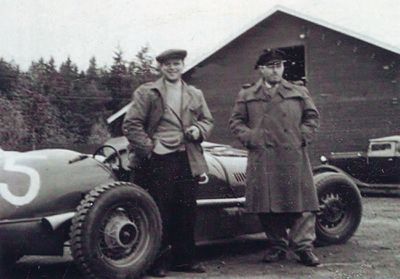 Gunnar and Ivar Ingvaldsen with GB1 at Leangen in 1948.

GB1 attending a race at Leangen Travbane in Trondheim, September 5, 1948. From left, Grähs in a Healey, Hinsværk in Snøhvit, Gunnar Bratlie in GB1, and Paulus Berger in Arvid Johansen's 1930 Ford Model A Roadster.[1] 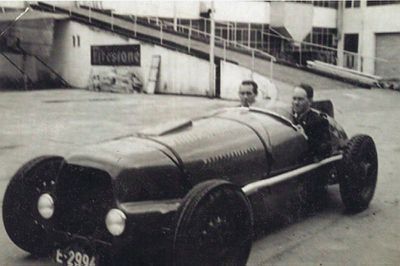 Gunnar and Bjørn Nielsen taking the GB1 for a test run after the engine had been adjusted at Fram Motor Kompani in Oslo in 1948. 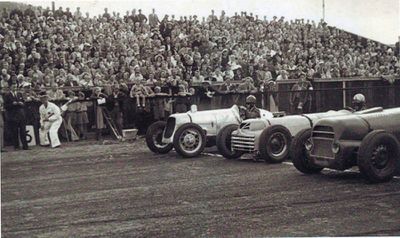 Three Norwegian special racers at the start line, attending a race in Drammen in 1949. From left, Paulus Berger in his Model A Ford Special, Werner Tollefsbøl in GB2, and Gunnar Bratlie in GB1.[1] 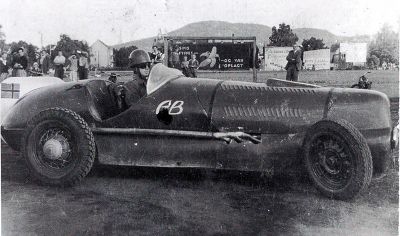 Paulus Berger with the car after he had bought it and renamed it PB. This photo was taken at the 1949 NM in Drammen that Paulus won. 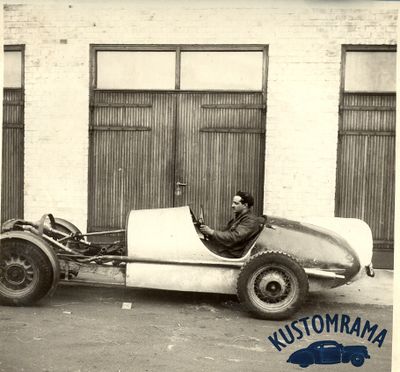 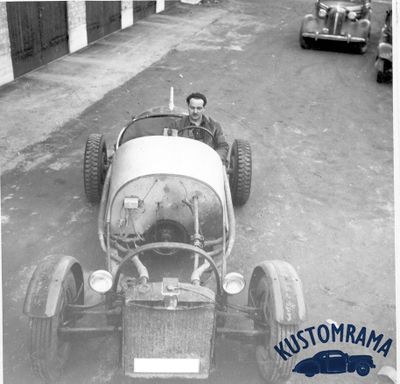 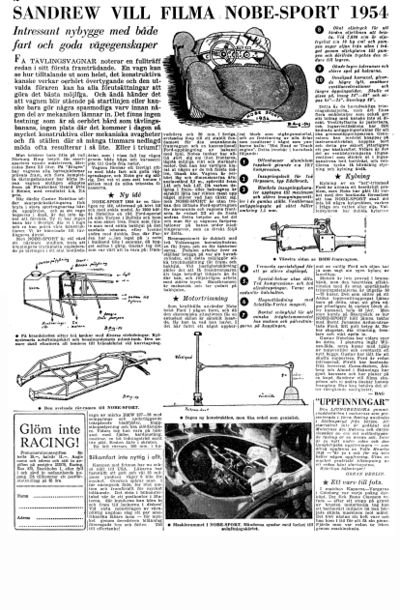 A techincal story on the Nobe Sport from 1954. 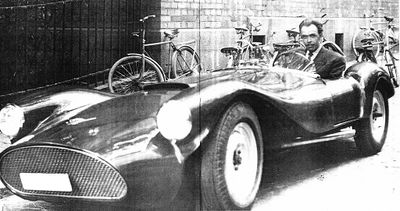 The Nobe Sport as it appeared after Nobelius had rebuilt it in 1954. 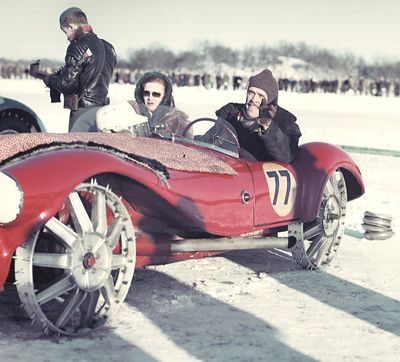 In 1955 Nobelius ran the car at different ice-races using casted wheels without tires. 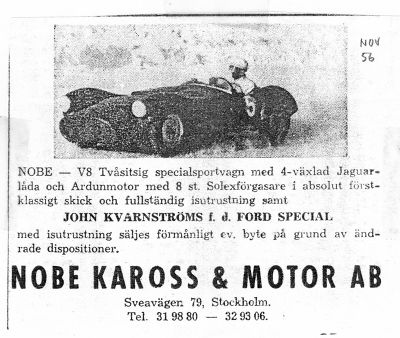 In November of 1956 Nobelius advertised the car for sale as the Nobe-V8. By then it had been fit with an Ardun equipped engine. 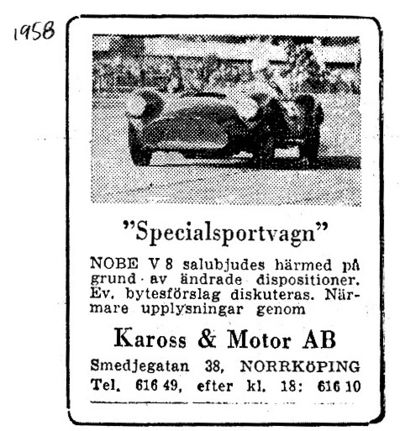 Another for sale ad from 1958. By then Nobelius had moved his operations to Norrköping. 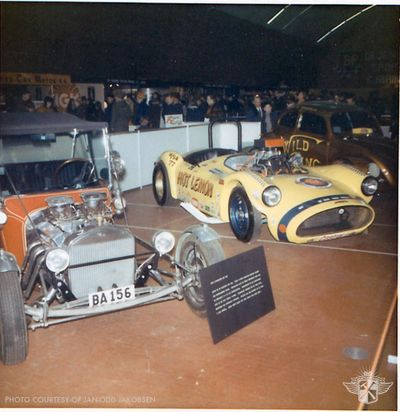 Hot Lemon making its debut in Njårdhallen in 1971. Photo courtesy of Jan-Odd Jakobsen.

Norwegian drag racing pioneers on their way to Mantorp in 1973. Hot Lemon can be seen on the first trailer. 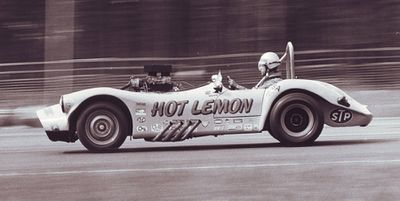 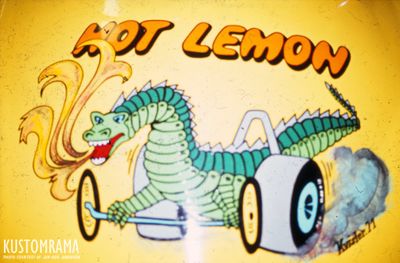 A close up shot of the Hot Lemon logo on the deck of the car. Photo courtesy of Jan-Odd Jakobsen. 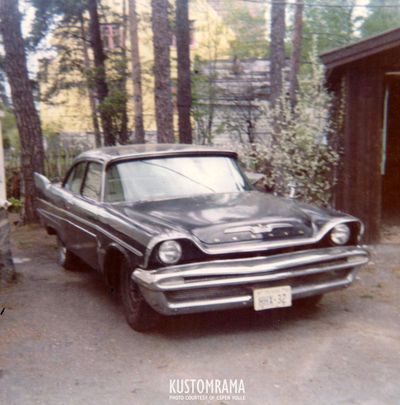 In 1974 Jan-Odd Jakobsen sold the Hemi engine from the car to Espen Volle. Espen bought the engine so he could install it in his first car, a mildly customized 1957 Plymouth. Photo courtesy of Espen Volle.

GB1 is a Nordic Special Racer originally owned and built by Atle Hoff of Trondheim, Norway. One of the unique features on Atle's racer was an independent front suspension from a BMW 327/328. In 1947 Atle raced his home-built Ford V8 Special in the first Gardermoen Racet. Atle came in on a ninth place. 16 cars started the race and 10 completed. After the race, Atle sold the car to Gunnar Bratlie of Gjøvik, Norway. Gunnar, who owned a car dealership had previously raced cars such as an Amilcar and a Hansa 1700. After buying the Hoff Special Gunnar teared it down and transformed the GB1. Rolf Ingvaldsen, Ivar Ingvaldsen and Kjell Mathiassen helped Gunnar during the build. GB1 had a modern look for its time, featuring Atle's independent front suspension and built-in headlights. Power came from an old flathead V-8.

Gunnar was not satisfied with how the car handled. He thought it was to heavy, so he sold it to Paulus Berger in 1949. Paulus renamed the car PB. In 1949 Paulus won NM in Drammen with his PB racer. Paulus sold the car to Gustav Nobelius of Stockholm, Sweden late in 1949. At the time, Gustav ran a company called Autoscandia in Stockholm. He had a racing career, driving the prince Bertil of Sweden's 1926 Bugatti 35, but he had a better reputation building cars then driving them. Nobelius made one run with the GB1. This was done at Varpen in Bollnäs. In 1953 he tore the car down and built a new one called "Nobe Sport 1954". The old body was retired, and Nobelius made a new one very similar to the 1953 Ferrari Testarossa. At the time most Nordic Special Racers were built with a cigar shaped body, so what Noeblius did was very unique. The old cigar shaped body and the old Ford frame disappeared during the rebuild. Nobelius used some parts from a Ford-special racer that he had previously raced on the lake Varpen in Bollnäs in 1950 and some parts from the GB1. From GB1 he used the BMW front suspension, the steering mechanism, the shock absorbers, the 1947 Ford truck rear end that Atle Hoff had installed, the rear leaf springs, the drive-shaft, some bolts, some of the electrical wires and some sheet metal. A lightweight chassis was made from 100 mm and 50 mm conduit. Nobelius meant that a race car needed a little front end, the lowest weight possible and the strongest engine available. The Nobe Sport had a 2.5 meter wheelbase, and it was 1,41 meters between the front wheels, and 1,47 meters between the rear wheels. Due to the weight of the front and rear end, the total weight of the car was more than Nobelius had planned. It was still the lightest Ford-racer in Sweden, and front end was about 2/3 the size of other cars. Two brake master cylinders from a Volkswagen were installed, one for the rear brakes and one for the front brakes. Nobelius preferred Ford engines, so he installed a bored Ford engine block he had lying around. The engine was hopped up installing Offenhauser 10:1 heads and an Edelbrock two-carburetor intake manifold. The intake ports in the engine block were increased in size and bigger valves were installed. The crankshaft was modified to increase the stroke and special pistons were installed. The camshaft was grinded, and a Scintilla-Vertex magneto was installed. Nobelius had also installed a switch on the dash he could use to deactivate the generator. All of the engine modifications were good for about 50 -75 extra horsepowers. Not bad compared to an Ardun head that increase the number of horses on a stock engine with about 60 horsepowers. In 1954 the car made its debut at Skarpnäck airport. Nobelius only attended two races with the car that year. The one at Skarpnäck and also Kanonloppet in Karlskoga. Kanonloppet was held October 3, and Nobelius drove the car to a 5th place. He came in one lap behind the winner. In 1955 Nobelius attended several ice races running on cast spike wheels without tires. In 1956 he attended more ice races. The car was also entered at Kanonloppet in Karlskoga. After Kanonloppet Nobelius advertised the car for sale. In November of 1956 Nobe Kaross & Motor AB advertised the car for sale. By then it was powered by an Ardun equipped engine that Nobelius had fit with eight Solex carburetors. The car was still for sale in 1958, but by then Nobelius had renamed his company Kaross & Motor AB and moved it to Norrköping. The car was eventually sold back to Norway, to Erik Hellum, under the name No-Be Special. Erik raced the car at various summer and winter races.

Around 1965 Birger Knutsen received the car as payment for an engine job he had performed. The job was most likely done for Erik Hellum, but that is not confirmed. Birger had the old race car towed, without an engine, to the farm Taraldrud in Kolbotn, where it was put in storage on the barn. Birger's son Fredrik B. Knutsen was 16 years old at the time, and he had the honor of steering the Nobe to Taraldrud.[3]

After that, the car ended up in Erik Rødsler's possession. Erik, who lived in Oslo, kept the car in storage for a long time without doing anything to it. Erik was one of the pioneers that hung out at Youngstorget in Oslo, and in addition to the No-Be-Special he also owned a customized 1953 Studebaker that was powered by a 331 Chrysler Hemi engine. Erik eventually grew tired of his projects, and he sold the No-Be Special and the Hemi engine to Fred Larsen and Tore Magnusson.

Fred and Tore installed the Hemi engine in the car, and they turned the old race car into Norway's first "Funny Car". In 1971 the car made its debut as "Hot Lemon" at a motor show in Njårdshallen in Oslo called "Motor". Jan-Odd "Cops" Jakobsen attended the show, and he saw the unique car for the first time.

In May of 1972 Fred made his debut run with the Hot Lemon at the dragstrip in Mantorp, Sweden. Ludvig Bjørnstad was also present at the same event, racing his 1934 Ford, and the two friends became the first Norwegians ever to compete with cars in an organized drag race. Ludvig raced in the Street Altered class, and he ended up as runner up in his class.

In 2012 Jan-Odd still owned the car. It was in pieces, and Jan-Odd was currently restoring it so he could enter it in historic drag racing events.

Please get in touch with us at mail@kustomrama.com if you have additional information or photos to share about GB1.