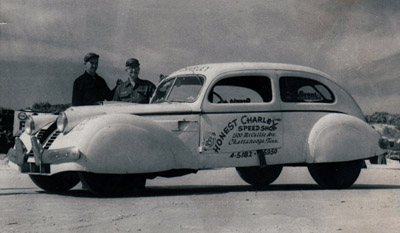 Charles Edward Card, Jr., also known as "Honest Charley Hisself", was born in 1905 in Chattanooga. Charley was of Scottish descent, as his father's people came from the Shetland Islands. After living in New jersey for a while, Charley's father moved to southeastern Tennessee during the carpetbagger era of Reconstruction that followed the Civil War.[1]

Charley's first car was Model T Ford. With the Model T and later a Whippet roadster, Charley became active in local speed contests. One of these, to the top of Lookout Mountain, attracted the attention of the record-setter, Cannonball Baker, who got Charley to tune his Franklin Airman sedan. Charley was a fixture at both Daytona and at Indy for many years.[1] In 1971, Honest hadn't missed a Indy 500 since 1933. He was the second inductee into the SEMA Hall of Fame. He was a lifetime member of USAC with member number 121 and an early member of the Indy 500 Old-Timers Club.

The monicker "Honest" appeared to Charley one day in front of the restaurant he and his wife Grace ran during WWII. It came out of a clear blue sky according to an interview he did with Hot Rod Magazine in 1971. His restaurant was always crowded, and people were fed fast. Average eating time pr stool was 4 1/2 minutes. Charley had a cash register on the counter, and it was taking up place where he could add a stool and serve another customer, so he put the register on a bench outside. He would then step outside the door to collect the money for what people ate. When they came out, he would ask them how much they owed. They would tell Charley, and pay him the amount. He never questioned it, and customers would say "My gosh, Charley, you must be honest." That was it, so Charley painted "Honest" real big on a sign atop the restaurant.[2]

In 1990, after more than forty years of industry innovation and dedicated service, Honest Charley discontinued operations at 108 Honest Street. However, the significance of Honest's legacy of always placing the customer first and his example of embracing all enthusiasts as family and friends continued to influence both the industry and all who knew him.[3]

Please get in touch with us at mail@kustomrama.com if you have additional information or photos to share about Honest Charley.