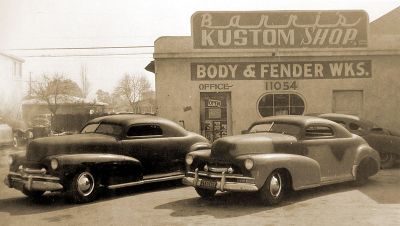 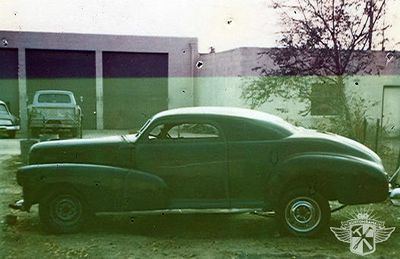 The surviving car as it looked when Les Heller bought it in 1973. Photo provided by Les Heller,

Barris Kustoms made two identical 1948 Chevrolet Kustoms for the movie High School Confidential. One of the Chevrolets was to be rolled over a cliff, so inner struts were installed in that one to prevent injury to the stunt man. Both cars were chopped 6 inches, and the rear quarter windows were blanked. Hoods and trunks were smoothed, custom grilles installed, and the doors equipped with pushbuttons.

In 1973, Les Heller of Burbank, California found an ad for a chopped 1947 Chevrolet in the Valley Green Sheet. The ad read "1947 Chevy Chopped Top Chrome Wheel $100". Les thought they had run out of room in the ad, but when he got there it turned out that the old custom only had one chrome wheel, no engine, transmission or interior. It was just an empty shell. I bought it, brought it home, and was going to resell it. After Les had brought the car home he found out that it was an old Barris Kustom. Since he only lived 15 minutes away from George Barris's shop at the time, he took photos of the car over to show George. George insisted that the car was destroyed in the movie, but they had made two, and this was the one that they didn't drop on its top. At the time George was trying to buy back a lot of his early cars so he could open up a museum on Hollywood Blvd. He wanted the old Chevy in the museum, and the car swapped hands for $625. For that price Les had to deliver the car to George, something that he did.[2]

In March of 2021 one of the cars was located about two miles from Ray Soff of Saddle Brook, New Jersey. Years ago Ray also talked to a guy that claimed he had the other Chevy with the caved-in roof. The same fellow also supposedly owned Jim Seaton's 1959 Chevrolet El Camino custom.[3]

Please get in touch with us at mail@kustomrama.com if you have additional information or photos to share about High School Confidential 1948 Chevrolets.