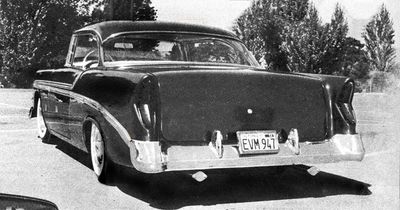 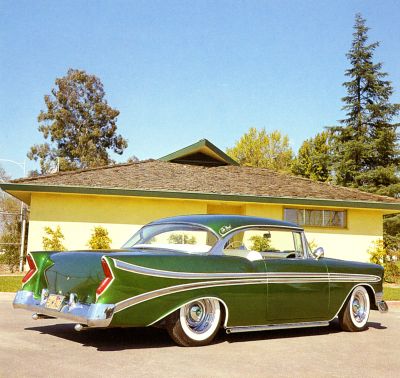 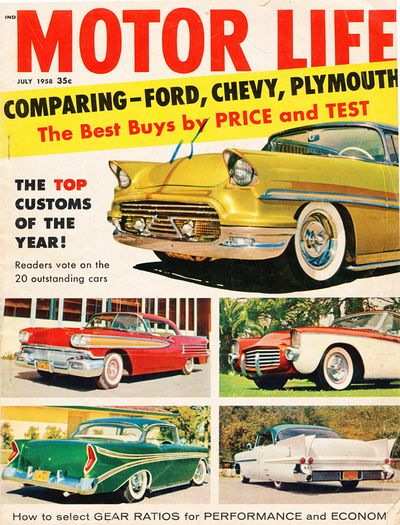 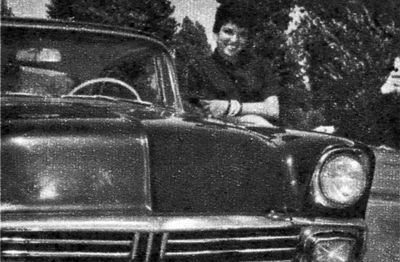 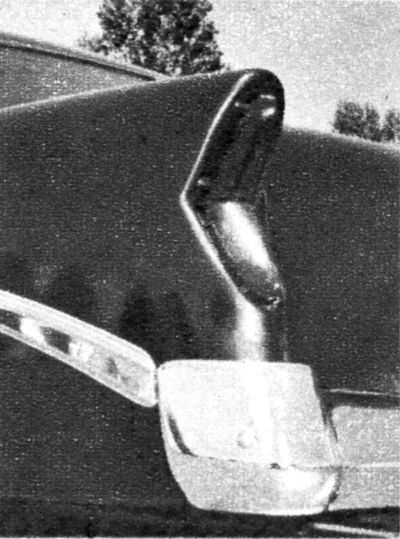 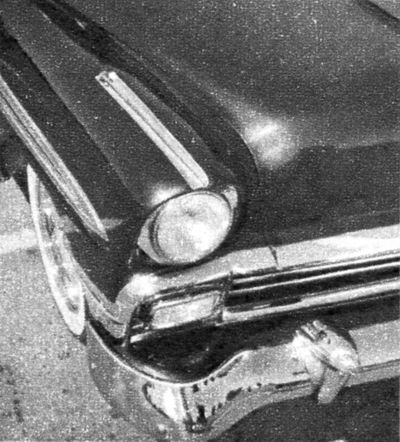 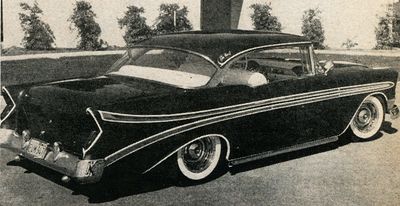 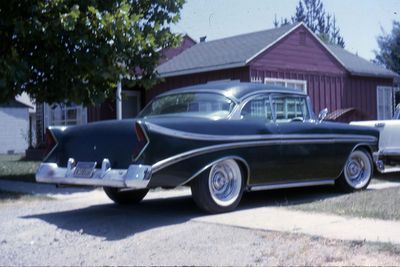 The Chevrolet in Rod Powell's driveway after Ed Amaral bought the car from Helen. Rod outlined the trim and body lines with a half inch lime green candy, before Andy Southard pinstriped it in white. Photo courtesy of Rod Powell.

1956 Chevrolet Hardtop restyled by Joe Bailon of Bailon's Custom Shop for Helen Avila of Modesto, California. Once Helen purchased her 1956 Chevrolet Hardtop, she soon began making sketches how she was going to have the car restyled. Her sketches became to reality and her dream came true once she turned the car over to Bailon's Custom Shop. The deck lid was filled and the hood was shaved and peaked. The door handles were removed and the doors were electrically operated. A custom grille was made out of chrome tubing. The rear fenders were reworked to accept the 1956 Buick lenses which were inverted at the lower half. The side-trims were outlined in both gold and white to provide a raised-up effect. Horizontal radio aerials were incorporated in the front fender tops. Twin lakes plugs were installed beneath the car. Once the bodywork was completed, Candy Apple was applied, a trademark of Joe Bailon.[1]

Later on, Joe freshen up the car by adding Lakes pipes, and simplifying the trim. The body was painted Candy Green with white outlinings on the wheel wells and, roof and side trim. Chromed reversed wheels and dual spotlights wrapped up the style.[2]

In February 1958 Helen's Chevy was shown at the 9th annual National Roadster Show in Oakland. It was entered in the Hard Top Convertible class were it also won a best in class award. Later on in 1958, Helen's Chevrolet was nominated as one of 28 "Top Customs of the Year" in Motor Life July 1958.[3]

The car was later sold to Ed Amaral, who repainted it so he could show it at the Oakland Roadster Show. The car was painted in a nitro lacquer, dark green toner with gold powder added for some sparkle. Rod Powell outlined the trim and body lines with a half inch lime green candy, before Andy Southard pinstriped it in white.[4]

Please get in touch with us at mail@kustomrama.com if you have additional information or photos to share about Helen Avila's 1956 Chevrolet.