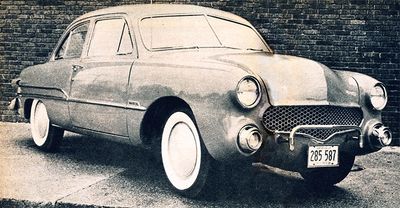 As it appeared in Custom Cars August 1959. Photo by Robert Hegge. 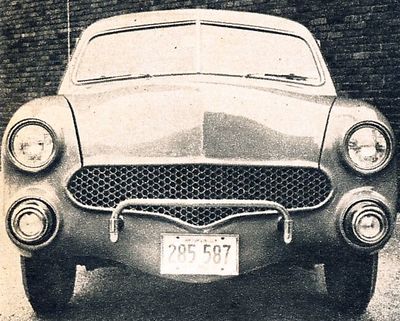 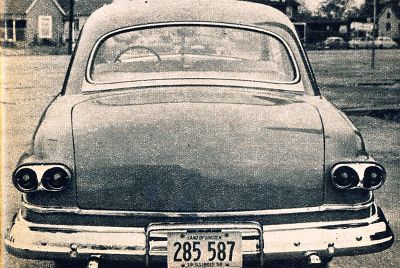 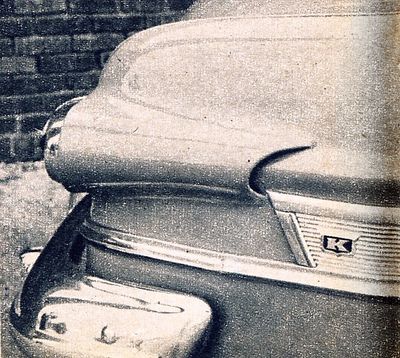 1951 Ford Tudor owned and restyled by Hank Katzenmaler of Dacatur, Illinois. Hank was a long-time car enthusiast, and did all the work by himself, including sectioning the body 4". He nosed and decked the car, but the door handles and locks remained. The front was rendered by making a new grille cavity, filled with mesh screen. The headlights were frenched by using 1953 Mercury headlight rings. On the bottom front of the fenders, he did something quite unusual, he used another set of Ford fenders, and grafted them upside down beneath the lights, and filled the round holes with 1956 Pontiac bumper guard lights. The front splash pan was also formed from the reversed fenders. It had no front bumper, but a custom Nerf bar was made. The side trim was composed by using 1957 Chevrolet and 1958 Ford parts. The taillights were from a 1958 Chevrolet, frenched into enlarged stock position, allowing scoops to be shaped into wind spears. The exhaust was routed through the bumper, and a 1949 Chevrolet license plate guard was fit to the stock bumper. Once all the bodywork was done, it was painted Brilliant Red. The car was kept at stock height due to the bad roads of Illinois at the time. It rolled in wide whitewalls with Moon discs. The interior was done in red and white Nylon Naugahyde.[1]

Please get in touch with us at mail@kustomrama.com if you have additional information or photos to share about Hank Katzenmaler's 1951 Ford.