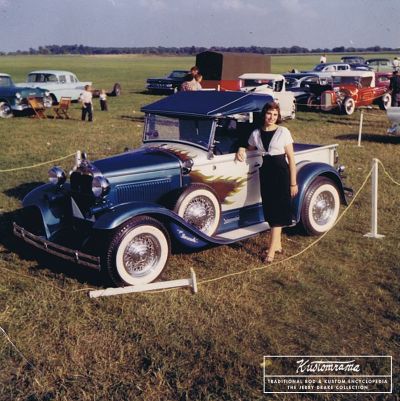 Jerry Drake’s first wife in front of George's Pickup. Jerry painted George’s roadster pick up in George’s garage in 1959. The garage was dirty, had no exhaust fan and was dimly lit. This was before Jerry started to work out of Cooper Body Shop. Photo from The Jerry Drake Photo Collection. 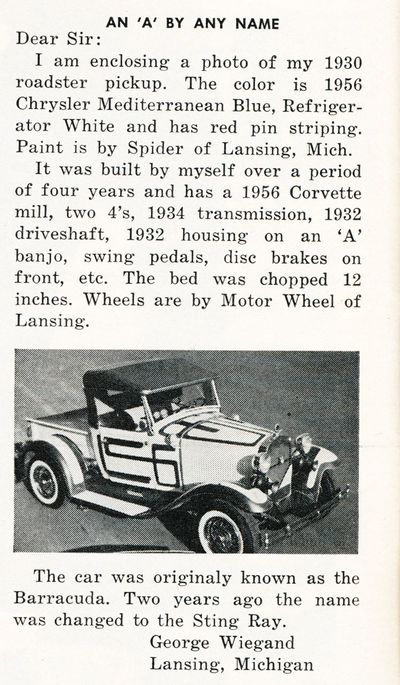 The Sing Ray version of George's truck as it appeared in the "Post Entry" section of Hot Rod Magazine August 1963.

1930 Ford Model A roadster pickup owned and built by George Wiegand of Lansing, Michigan. George was a member of Capital City Customs. In 2016 Jerry "Spider the Crazy Painter" Drake told Kustomrama that he used to travel to car shows with some of the guys from Capital City Customs; "Back in 1957-1958 and 1959 since I was the only one that had a custom car in the Injectors of Lyons car club that I formed, I started to travel to the shows with a bigger and older club called the Capitol City Customs. Several of my best friends were in that club including Rudy Rodriguez, Bob Wiborn, Ollie Hine, George Wiegand and, my rival at the time, Terry Smith. Because all of us would always take 1st and 2nd place trophies, and sometimes Best Car of the Show or People's Choice, there was always a grown when "the guys from Lansing" showed up. George was at least 10 years older than I was and he was a guy that kept all of us younger "hot shots" in line and out of trouble. We appreciated that. After I quit showing, when I finally had beaten Terry Smith for 1st Place in the Semi-Custom Coupe and Sedan class at the Lansing Rod & Custom Show, I started custom painting. George never had any money and I painted his roadster pickup first in flames and later the scallop design for free. That was more or less to thank him for the 3 years he kept me on the "straight and narrow" path."[1] The first version of George's truck was shown as the "Barracuda."[2]

In 1963, George's pick up was featured with a photo in the "Post Entry" section of Hot Rod Magazine August 1963. That version of the truck, known as the Sting Ray, was painted Refrigerator White with 1956 Chrysler Mediterranean Blue scallops by Jerry "Spider the Crazy Painter" Drake. The scallops were pinstriped in red. According to George's letter, he built it over a period of four years. It was powered by a 1956 Chevrolet Corvette mill that ran two 4's, a 1934 Ford transmission, a 1932 Ford driveshaft, and a 1932 Ford housing on an "A" banjo. It was also fit with swing pedals and disc brakes up front. The bed was chopped 12 inches, and it ran on wheels by Motor Wheel of Lansing.[2]

After a fight with his wife, George took a sledge hammer and smashed in the roadster pickup. In 1984 he told Jerry Drake that he had located his old roadster pick up, and he asked him if he would repaint the scallop paint job again. Jerry told him he would. Unfortunately that never happened, as George passed away from cancer 3 months later.[1]

Please get in touch with us at mail@kustomrama.com if you have additional information or photos to share about George Wiegand's 1930 Ford.