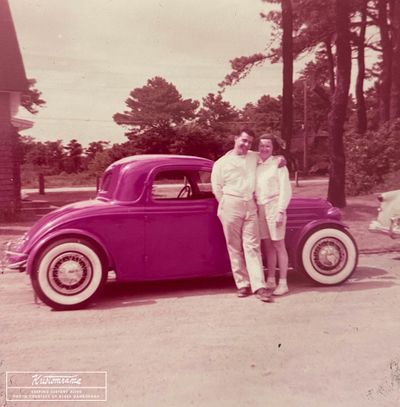 George started building the coupe with his buddy Ralph Potter in 1954. "By 1957 it was on the road!" This photo shows George with his wife Maureen Casey next to the coupe. Photo courtesy of Derek Dandurand. 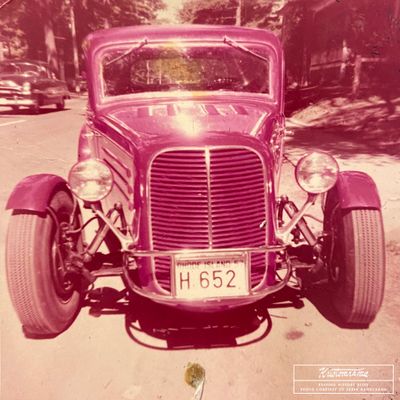 A photo of the car running 1957 license plates. George modified the front end on the coupe to house a 1937 Ford truck grille. A custom-made nerf bar protected the grille and housed the license plate. Photo courtesy of Derek Dandurand. 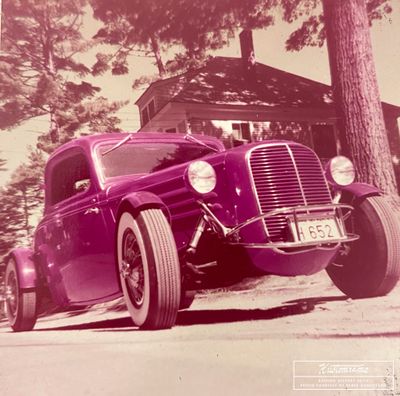 The hood side panels were taken from a GMC. Photo courtesy of Derek Dandurand. 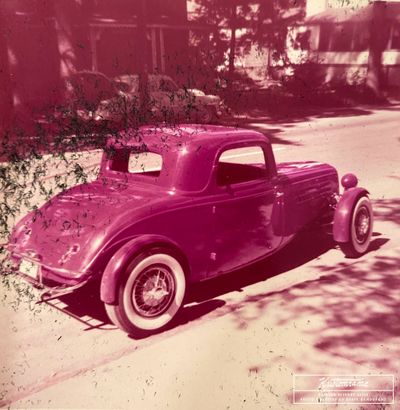 The body was channeled 7 1/2 inches over the frame before George upgraded it with 1940 Ford suspension and brakes. Photo courtesy of Derek Dandurand. 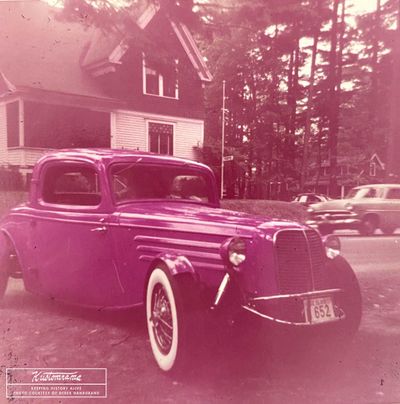 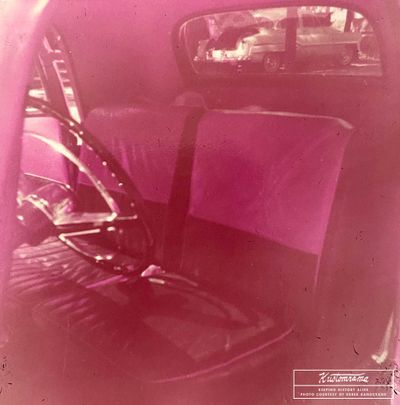 He worked with Frank's Auto Top in Providence, Rhode Island when it came to stitching a black and red leather and Naugahyde upholstery that harmonized the exterior. Photo courtesy of Derek Dandurand. 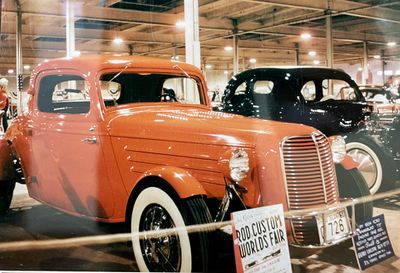 A photo of the coupe taken at the 1958 Hot Rod & Custom Car World's Fair in West Springfield, Massachusetts. This comes from the Bob Bishel and Pete Bozzo collection, and it appears in the book Cool Cars Square Roll Bars. 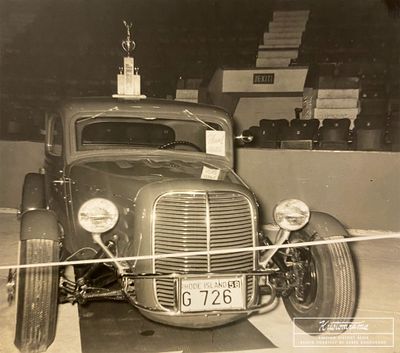 A photo of the car from an indoor car show. At the time it was running 1958 license plates. Photo courtesy of Derek Dandurand. 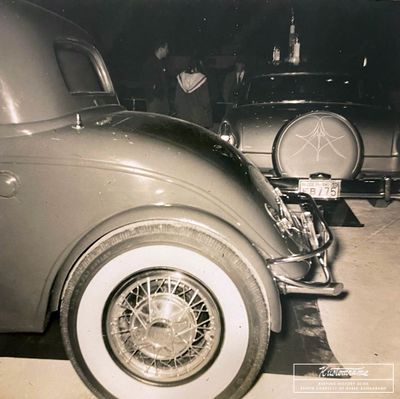 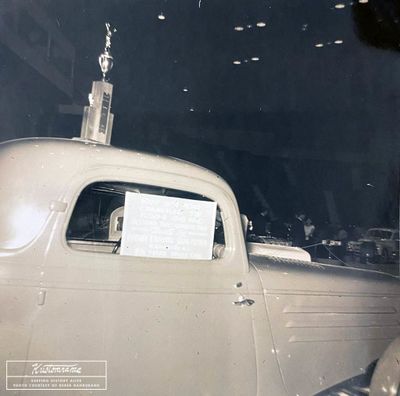 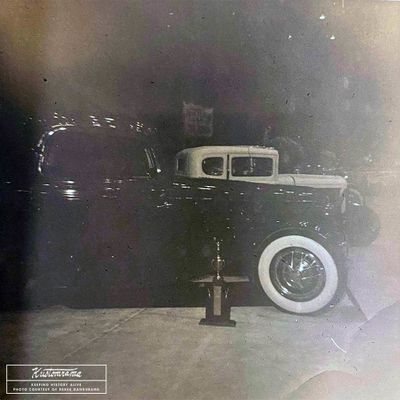 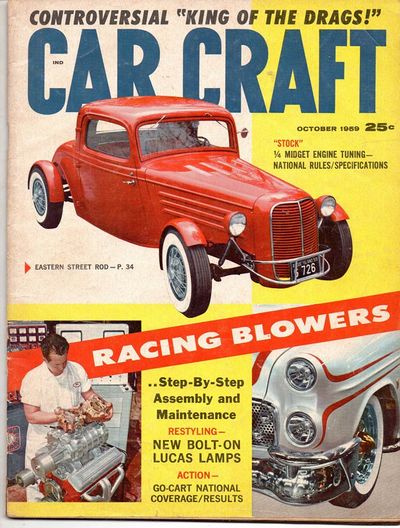 Eastern Street Rod. George's coupe was featured in Car Craft October 1959, making an appearance on the cover of the magazine. The story wrongfully listed the car as a 1933 Ford. 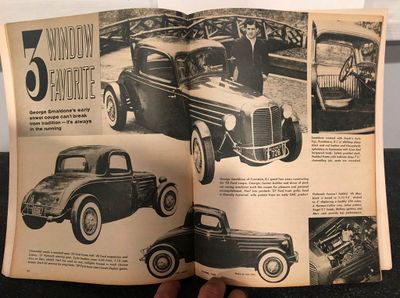 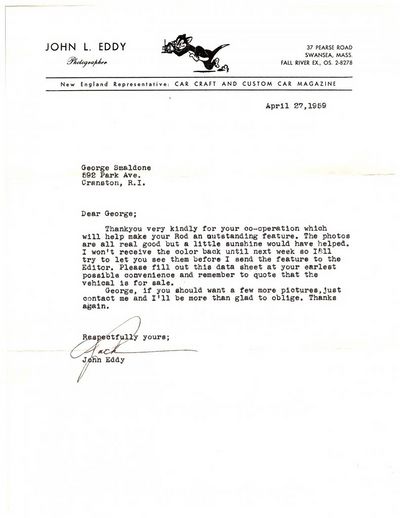 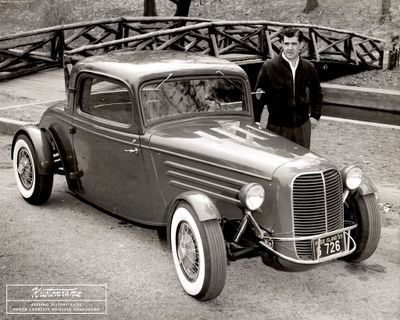 A photo of George with the coupe taken circa 1959. Photo by John Eddy, courtesy of Derek Dandurand. 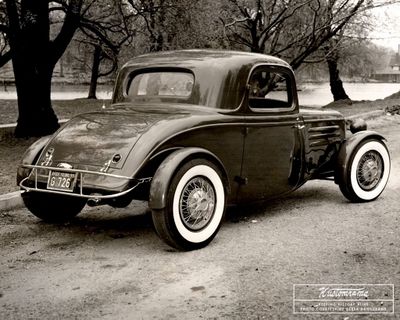 1934 Ford 3-Window Coupe owned by George Smaldone of Cranston, Rhode Island. In June of 2021, George's grandson, Derek Dandurand, told Sondre Kvipt of Kustomrama that his grandpa started racing stock cars at Seekonk Speedway in 1949. "By the early 50s he was unstoppable. He won his first Track Championship in 1953 and continued to dominate until 1955! He was the first in Seekonk history to win three championships in a row."[1]

George started building the coupe with his buddy Ralph Potter in 1954. "By 1957 it was on the road!" In 1959 he was featured as the cover car and centerfold in the October issue of Car Craft Magazine. According to the story, the purpose of the build was strictly pleasure and personal accomplishment. The story wrongfully listed the car as a 1933 Ford.[2]

George modified the front end on the coupe to house a 1937 Ford truck grille. A louvered hood, consisting of GMC side panels was installed along with a nerf bar. The body was channeled 7 1/2 inches over the frame before George upgraded it with 1940 Ford suspension and brakes. He also installed a 1937 Plymouth steering gear and motorcycle type fenders. He ran 6.40 tires up front, and 7.10 tires in the rear. The wheels were Mercury. Nerf bars were also installed to protect the rear end. It ran taillights housed in small chrome bezels and a decklid that was secured by snap-locks.[2]

In 1959 George's coupe was featured in Car Craft October 1959. Back then, it ran a 1948 Mercury Flathead V8 that had been bored to 3-15/16" and stroked to 4" displacing a healthy 256 cubes. It was hopped up with a Harmon-Collins cam, Jahns pistons, Kogel 9-1 heads, Mallory ignition, and a Merc carburetor. The engine was hooked to a 1939 Ford transmission with Lincoln Zephyr gears.[2]

Once the bodywork was completed, George gave it a Siren Red paint job. He worked with Frank's Auto Top in Providence, Rhode Island when it came to stitching a black and red leather and Naugahyde upholstery that harmonized the exterior. The seats were reworked, and the dash featured safety padding.[2]

In 1959 Derek's mother was born, and George had to sell the coupe. "He sold it to a gentleman who lived in Cape Cod, Massachusetts," Derek told Kustomrama. "It was then sold to Joseph Desanto from Cranston in January of 1962. Bob Anderson also from Cranston who knew my grandfather and the car saw it driving down the road and jumped out in the road to stop him. Surprised it wasn’t my grandfather and he knew Joseph Desanto he worked out a deal and bought the car. Because he joined the air force and was shipping out at the end of the month he couldn’t hold on to the car. He then sold it to Dick Williams from Cranston. When Bob Anderson returned from basic training 6 months later he visited Dick Williams and found out that he took the 48 flathead merc engine out." In 2021 Dick told Derek that he swapped the flathead for a Small Block Chevy engine. "He also started to weld the cycle fenders to the body." Dick didn't complete the job, and he sold the coupe to a guy that he believed was from Cape Cod in Barnstable, Massachusetts. According to Dick, he might have been a sailor stationed at the Quonset Point military base in Rhode Island. Dick told Derek that he sold the coupe late in 1962 or early in 1963.[1]

After Dick sold the coupe, it supposedly went out of the state. Derek is currently trying to trace his grandpa's old hot rod. "Local legend is that the car is still around in Warwick, Rhode Island, somewhere on West Shore Road tucked away." Currently living in New Jersey, Derek has been hunting on the car for ten plus years. Do you know what happened to the coupe after Dick sold it? Or have you actually seen the car lately? Please get in touch with Kustomrama at mail@kustomrama.com if you have any info to share about the Smaldone Coupe.

Please get in touch with us at mail@kustomrama.com if you have additional information or photos to share about George Smaldone's 1934 Ford.