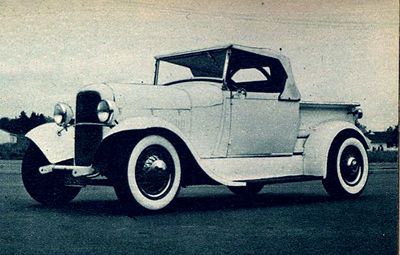 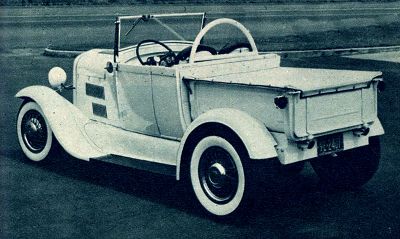 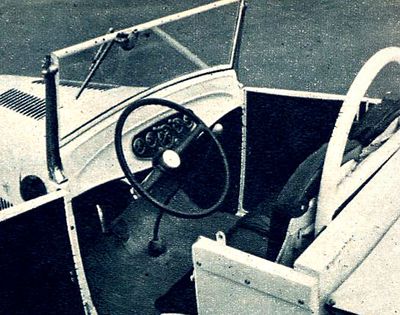 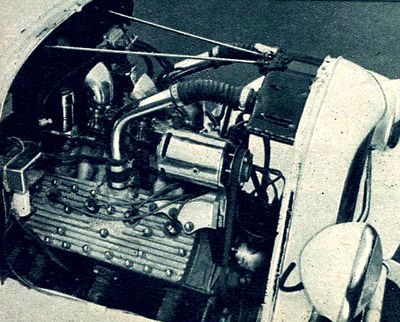 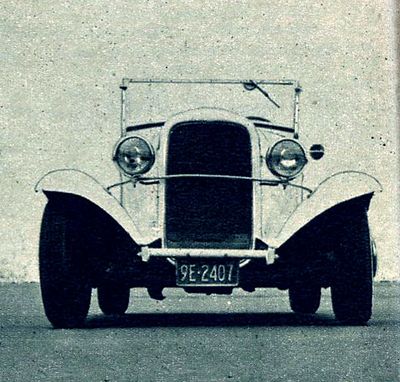 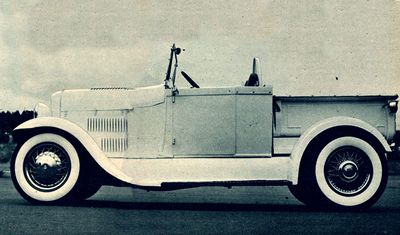 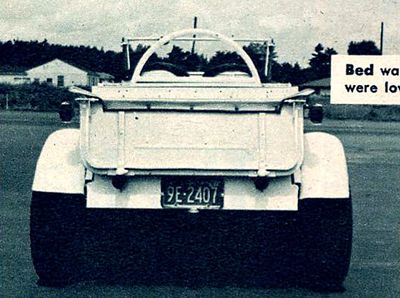 1929 Ford Model A Pickup owned and built by George McIntyre of Gladstone, Oregon. When George decided to to build a good looking and practical rod, he used a 1929 Ford as a basis for the car. There were to reasons for this, first, of his many hot rods, a Model A had not been one of them. Secondly, the car was proper to carry-all around his horse stable, and as a fun car for the weekends on the road. Beginning with a set of 29' rails, George installed a 1938 Ford axle complete with brakes, spindles, and hubs. A shortened A rear axle housing was used as rear suspension. The spring mounts were adapted to 1940 Ford back plates so that the stock spring could be used. The Houdailles were swapped with modern tube shocks. A center tube crossmember was then located for the rear mounts of a V8 mill. No controls were mounted on the chassis. Steering was adapted from a 1938 Ford, this allowed the steering arm to clear the fenders when the body was mounted.[1]

While George was collecting the necessary body parts for the truck, he had Bud Parham of Portland to build a hot mill for him. Bud bored a 1946 Mercury block to 3 5/16" and made the usual port and relieve job. Stock exhaust valves were reinstalled, but the intake valve seats were recut to take oversize valves. A Clay Smith 284,2 camshaft was then installed. Before dropping in the quarter stroker crank, the whole reciprocating assembly was given a full balance job by Theron "Blackie" Blackburn of Redmund, Oregon. The 286 cubic inch Merc engine was fit with ForgeTrue pistons as well. Blackie also supplied the ignition system, a battery outfit that he designed for street and track. Bolt on goodies selected were an Edelbrock triple intake manifold, Edelbrock 9:1 heads and homemade headers. The engine was equipped with a 19 pound flywheel and an Auburn clutch before being dropped in the chassis.[1]

With the chassis and engine ready to go, the assembly of the body was up next. The bucket was bolted to the rails, and the firewall was cut out and replaced with a curved steel plate which was welded in. The plate gave a sanity appearance and left plenty of room for engine work and removal. As soon as the main body position was permanently established, George built up the mounting rails for the pickup box. He wanted the bed to be functional, so it was installed 3 inches higher than stock and shortened 13" to avoid excessive overhang. Sheet metal was used to form the rear body panels, and to hide the rails and bottom of the bed. The exhaust was routed through the panel beneath the bed. Two aluminum aircraft seats were mounted on a tube frame. He discovered that the steering column was to long, so it was shortened 11 inches. The clean cockpit was fit with Stewart-Warner instruments and a 1940 Ford steering wheel. The master cylinder was mounted on the firewall, and a 1949 Ford pull-on handbrake was installed. A high rollbar was installed for safety case.[1]

Johnny Laidlaw of Gladstone Auto Trim Service made up a set of snap-on seat cushions for the aircraft buckets in black Naugahyde over foam rubber. Johnny also stitched up carpets in the same procedure. The almost complete car was then moved to a body shop where the windshield was mounted, the cowl filled, a 1932 Ford grille installed, and the fenders and running boards modified and put in place. The rear fenders were lowered 3" in the aft, then bobbed a like amount. Once completed, the car was painted white. When ready for the road, the 2670 pound roadster pickup really fulfilled George's expectations. He could haul a saddle and a bale of hay, choose off at the drags, or if the weather is right, he could head off for a day's drive in the Pacific coast hills. However, the rainy northwest is not always conducive for roadstering, so an easily removable canvas top was added.[1]

Please get in touch with us at mail@kustomrama.com if you have additional information or photos to share about George McIntyre's 1929 Ford.