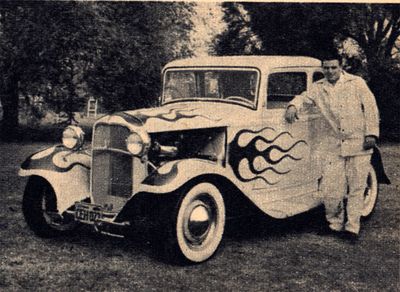 1932 Ford 5-window Coupe owned by Renegades members George Collins and Richard Collins of Whittier, California. Dick and George's coupe featured a rolled and pleated interior and trunk. The undercarriage was painted and covered in white tuck and roll that was covered with white clear plastic.[1] The coupe was operated by a chromed and warmed over 1956 Oldsmobile engine.[2] In 2018 George told Kustomrama that he painted it Pearl White, while Larry Watson of Watson's House of Style laid a fancy flame paint job. Larry painted the flames in a light candy turquoise with dark blue tips and black pinstriping.[3] "We won numerous Concours de'elegance shows with the car, it was great fun!"

In 1958 George lost his mind and got married; "Being of little finances my true love had to go. I had taken it apart to do some changes. When my wife got pregnant I sold. Due to the fact that I know had to focus on supporting a family I lost track of the car. It was great fun and it probably kept me from getting in trouble."[1]

Please get in touch with us at mail@kustomrama.com if you have additional information or photos to share about George Collins' 1932 Ford.