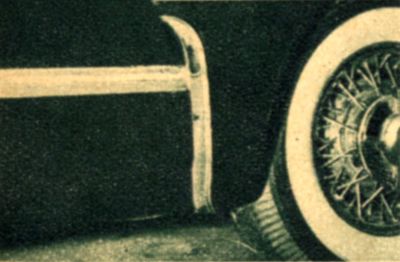 1953 Dodge Sierra Wagon restyled by Valley Custom for George Cavanah of Hollywood, California. George purchased his 1953 Dodge in need of a daily driver while he was working as a newsboy, hauling out papers to the citizens of Hollywood. Shortly after he bought the car, he drove it to Neil Emory and Clayton Jensen at Valley Custom to get his paper car restyled. The hood and deck lid was cleaned for all unnecessary trim, the hood was peaked and the hood scoop was removed. The rear fenders were peaked above the taillights. Trim moldings from a 1950 Ford was installed along the window line. Additional accessory strips called door-guards were adapted to the drip rails. The grille was modified by removing all the vertical bars, giving it a cleaner appearance. The car was featured in Car Craft September 1954, showing the readers how to radius wheel openings. The car was slightly lowered in the front, giving it a race car look, raking forward. New side trims were made, composed by Valley Custom. Horizontal trim spears were added to the lower position of the body butting into vertical spears in front of the rear wheel openings. The stock gas filler was replaced by a 1951 Chrysler spout. The exhaust were routed through the rear fenders, flowing out of custom made chrome fittings. When the car was featured in Car Craft April 1956, it rolled on genuine wire wheels fit with white walls.[1]

Please get in touch with us at mail@kustomrama.com if you have additional information or photos to share about George Cavanah 1953 Dodge.