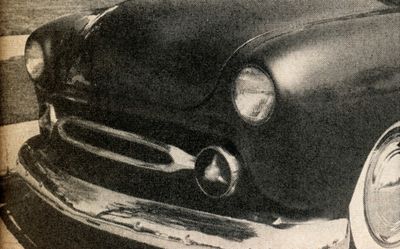 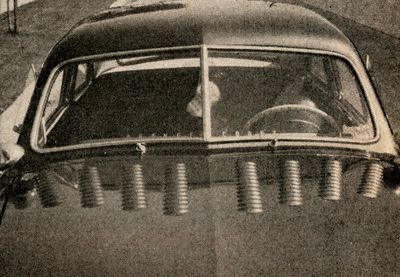 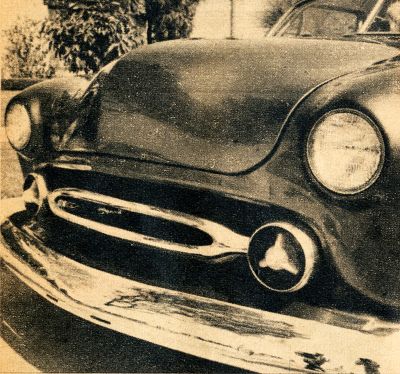 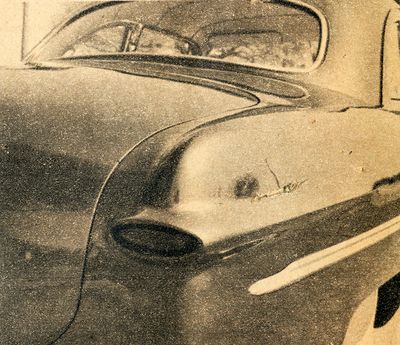 1949 Ford Club Coupe restyled by Gene Harkins of Orange, California. The front end was given a floating grille made from a 1954 Pontiac grille bar incorporating 1953 Chevrolet park light housings and 1952 Ford spinners. The headlights were frenched and the hood was shaved and rounded before eight rows of louvers were punched into it. The door handles were shaved away and replaced by micro switches. Side trim was reversed 1954 Dodge trim. In the rear, a special made bronze casting was used to french and tunnel the stock taillights. The rear fender seams were filled in and a slight peak added to the top of the fender. Like the hood, the deck lid was also shaved and received rounded corners. Gene lowered the car 5 inches up front by reversing the spindle arms, and 8 inches in the rear by blocking and C'ing the frame. Once the bodywork was done, the car was painted a Golden Maroon at the Barris Kustoms shop.[1] Under the hood, Gene's shoebox was fit with a full-race 1952 Oldsmobile engine.[2]

Please get in touch with us at mail@kustomrama.com if you have additional information or photos to share about Gene Harkins' 1949 Ford.