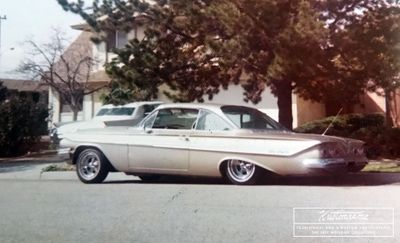 A photo of Eric's 1961 Impala. He bought this for $300 in 1974. "I lowered it and put 5/60 tires and 6 inches deep Cragar rims." He didn't have money to buy lifts, so he drove it like this, recalling that it was very bouncy indeed. "I got my first traffic ticket in that car for being too low!" Unfortunately, he crashed the Impala and ended up selling it for $50. Photo from The Eric Weisman Collection.

Eric and his buddies didn't have an official club. No plaques or jackets, but they called themselves the "Reseda Boys." "When we were 16, 17 years old we cruised Van Nuys Blvd on Wednesday nights. Some of my friends who could afford it put hydraulic lifts on their cars. I never had the money to do that. We were just high school kids who came from working-class families. All my friends worked part-time jobs to buy cars. We were part of a really cool era of Lowriding in the early ’70s. I saw many styles come and go during this time."[1]

Please get in touch with us at mail@kustomrama.com if you have additional information or photos to share about Eric Weisman.