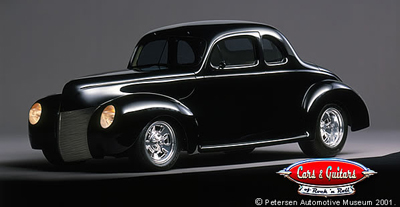 Eric Clapton's 1940 Ford coupe was built by Roy Brizio Street Rods. Based on a design by Thom Taylor, the coupe was Eric's first hot rod.

Eric Clapton of London, England. Clapton grew up in post-WWII England. As so many other, he was fascinated with most things American. By the age or nine or ten Clapton was aware of the hot rod culture, and he had a pretty good idea of what those modified coupes and roadsters were all about. During the same time, Clapton developed a more general interest in machinery. The influence came from an uncle who was a sci-fi buff. Clapton's automotive tastes were further developed with model building. Cars, ships and planes were built. It was mostly cars he built, and he remembers building more American than European model cars. In the 1960s Clapton went on to become a professional musician, playing guitar with the likes of John Mayall, The Yarbirds, Cream and various incarnations of his own band, and he never came around to own or build a hot rod himself. He developed a taste for Ferrari's, and in 2001 he had 8 Ferraris in his collection.[1]

Over the years, Clapton's most direct exposure to hot rods came from fellow English guitar player, Jeff Beck. Jeff's cars took Eric back to his model building days. While Beck is a 1932 and 1934 Ford fan, Clapton was more found of the more rounded cars from the 1940s. In the early 1990s Clapton spent a couple of days in Austin, Texas as the guest of Jimmie Vaughan. During the stay, Clapton became well acquainted with Jimmie's Buick Riviera and his Chevrolet Fleetline custom. Especially the more rounded lines of the Chevrolet appealed to Clapton, so after spending time cruising Austin in Jimmie's Chevrolet, Clapton was hooked. Vaughan invited Clapton to the 50th anniversary Grand National Roadster Show in January of 1999. At the show Clapton talked to Roy Brizio, of Roy Brizio Street Rods, and it didn't take long before Clapton's teenage dreams about owning a hot rodded 1940 Ford coupe became reality. Clapton wanted Roy to construct a sleek 1940 Ford coupe that featured a supercharged big-block Chevrolet engine, manual transmission, big rear tires and a healthy forward rake. Roy had Thom Taylor visualize the concept on paper. [1]

Please get in touch with us at mail@kustomrama.com if you have additional information or photos to share about Eric Clapton.