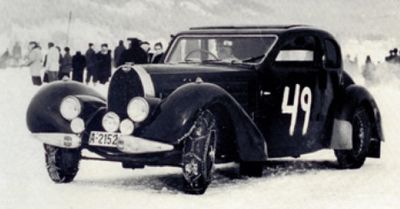 1937 Bugatti Type 57 Ventoux produced in December of 1937. The car was first sold to Van Ramshorst, a Bugatti dealer in Amsterdam, Netherland. It was used as a demonstration-car and received registration-number G-1. During WWII, the car was stored in an old church alongside many other cars. Norwegian shipbroker Edward Sejersted Bødtker bought the car through the French dealer Mortarini in Paris in 1947. Edward brought it to Norway with the Dutch lincens-plate, and it didn't receive a Norwegian license plate until 1949. The car was then registered as A-21524.[1]

In 1950 Edward's Bugatti was entered in Gardermoen Racet. It was run by Tore Levorsby that run his own garage. Tore maintained the car at the time. Edward sold the car to Bjørn Johannessen for 6000 NOK in 1953. Bjørn used the old Bugatti as his daily driver, and he also competed with the car in several ice-races. Bjørn's brother Dag was mostly the driver, while Bjørn and his other brother Brede operated as mechanics. Dag raced the Bugatti at Jahren-vannet in 1954, where it won its class, and took 1st place in the final heat. The same year the team also won Østensjøracet. In 1955 the old Bugatti won the ice-race at Randsfjorden thanks to home-forged tractor-chains on all four wheels.[1]

Bjørn sold the car to Arild Staver in 1986. In 1993 Arild restored the car mechanically, and he overhauled the engine by installing a new crank-shaft, cranks and pistons.In May of 1998, Arild sold the car to Øivind Selvig. Øivind remembered the car from the 1950s, and he was pleased to finally be able to buy his old dream car. Øivind restored the body and interior, and he gave the car its original dark blue color that it had when it competed at the ice-races of Norway in the 1950s. After the restoration, Øivind has been competing with the car in several international Bugatti rallys all over Europe. In 2011, the car was also raced at the Gardermo Racet memorial race.[1]

Please get in touch with us at mail@kustomrama.com if you have additional information or photos to share about Edward Sejersted Bødtker's 1937 Bugatti.