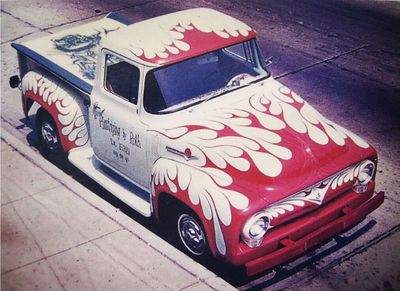 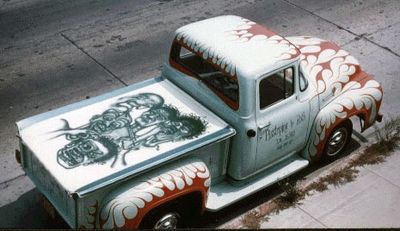 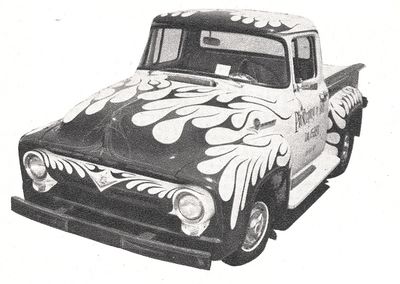 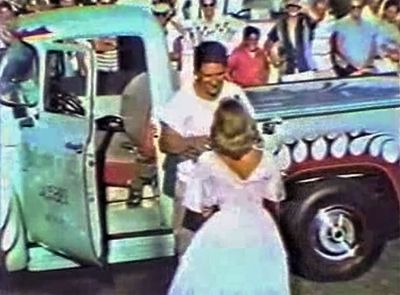 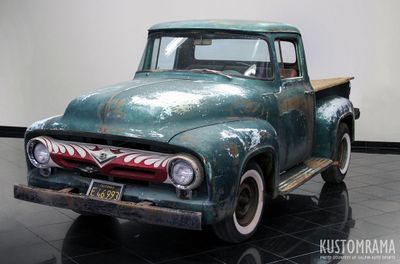 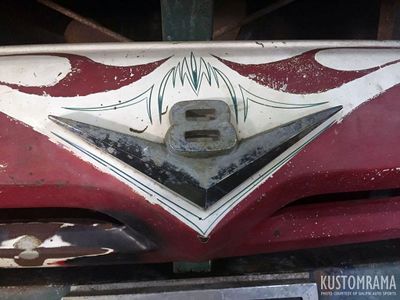 A close up of the flamed and pinstriped grille. Photo courtesy of Galpin Auto Sports. 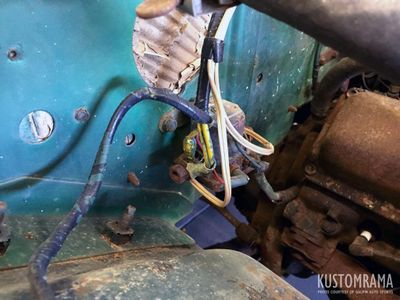 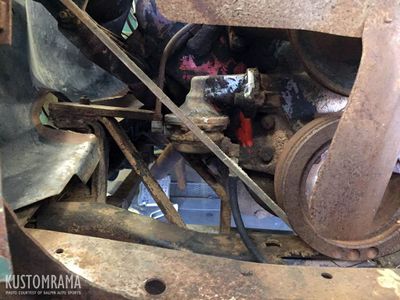 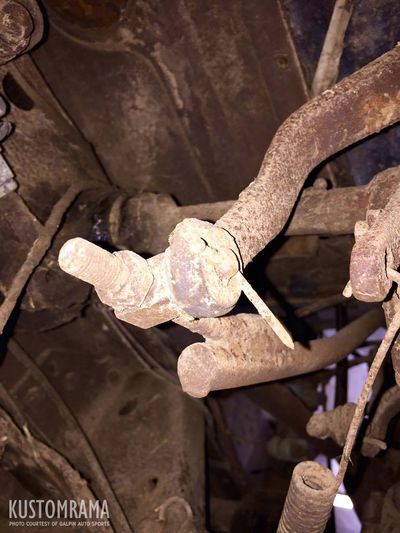 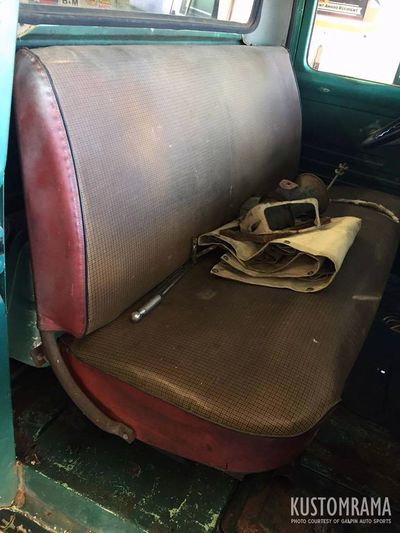 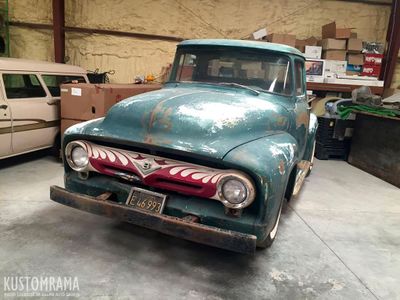 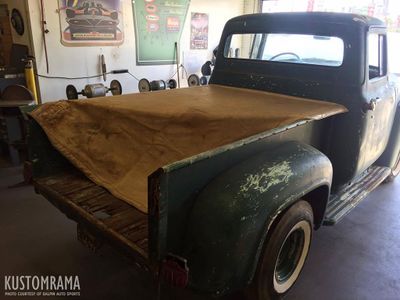 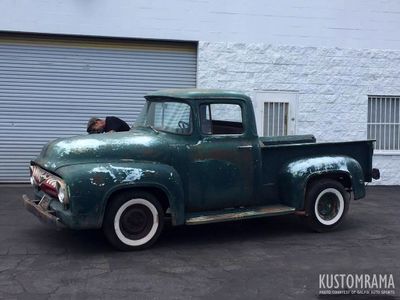 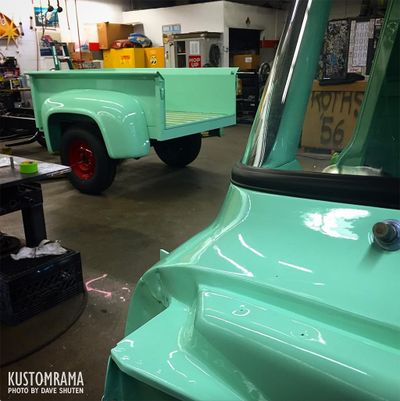 A photo of the truck taken mid January 2017. During the restoration, the truck was first painted in the original color. Roth did not pull the car apart when he painted it white, so in order to keep it as authentic as possible, it was decided to start where Roth started. Photo courtesy of Dave Shuten. 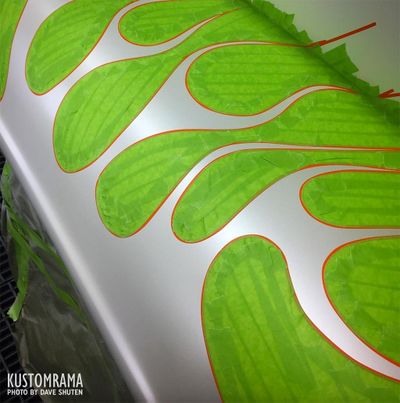 A photo of the truck taken one week away from the 2017 Grand National Roadster Show. Photo courtesy of Dave Shuten. 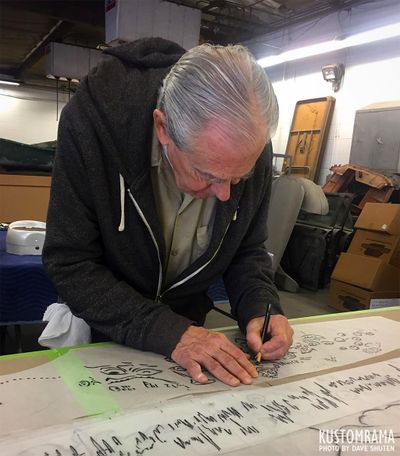 Robert Williams working on the artwork for the dashboard. Photo courtesy of Dave Shuten. 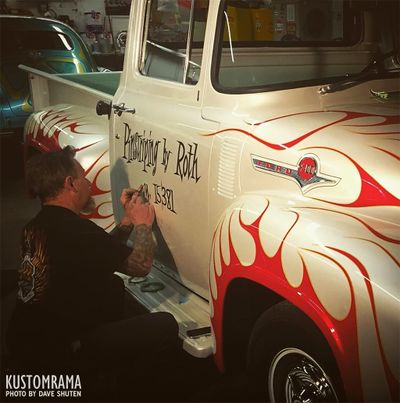 Pete Finlan lettering the doors on the truck. Photo courtesy of Dave Shuten. 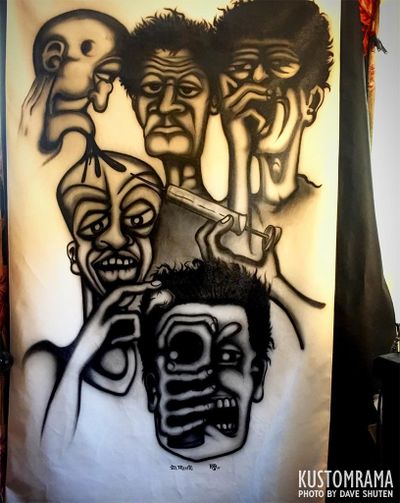 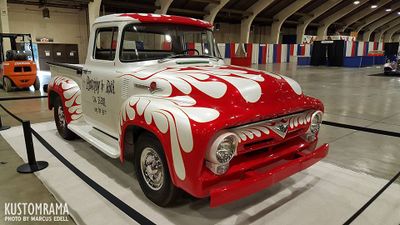 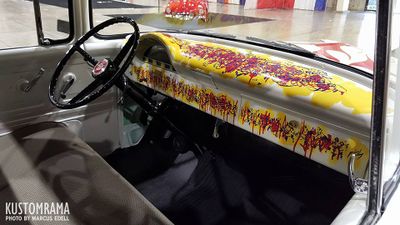 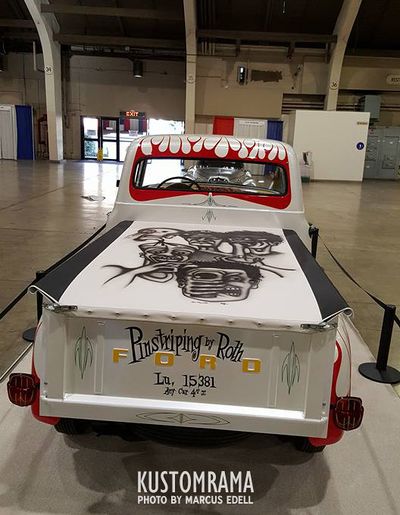 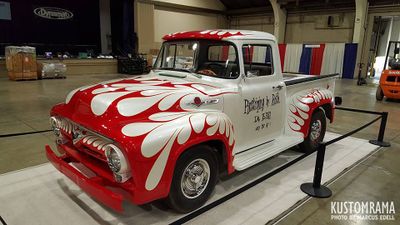 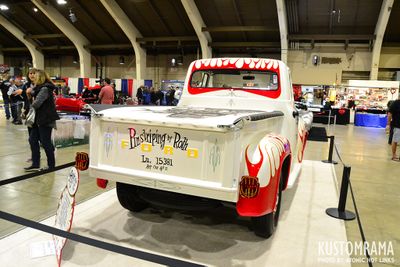 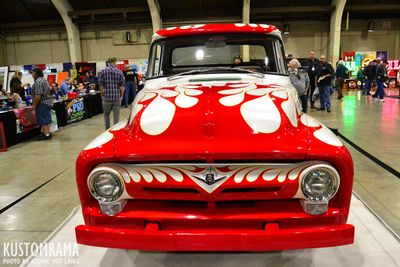 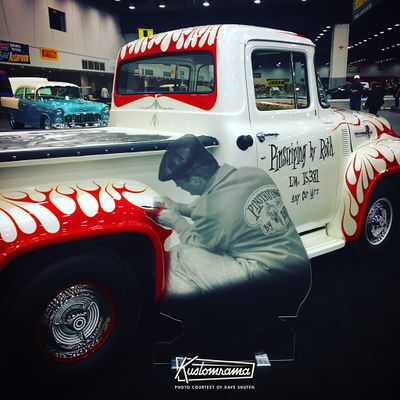 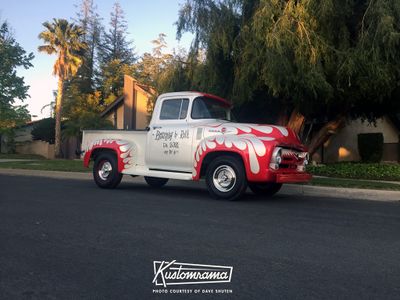 1956 Ford F-100 truck owned and restyled by Maywood Drag Wagons member Ed Roth of Maywood, California. In 1957 Ed sold his 1948 Ford so he could buy the F-100 truck. He painted red flames on the truck, and used it as advertising for his business. The advertising worked, and Ed got a lot of customers off the street wanting flames on their cars. On the tonneau cover of the car, Ed had also airbrushed a mural.[1]

The Truck Resurfaces in 2016

According to Dave Shuten, Roth traded the truck in at a used car lot in Southern California in the late 1950s.[2] California hot rodder Zain "OZ" Bradshaw bought it, before moving to Oklahoma. When he moved to Oklahoma he brought the truck along. He painted the body green and used it as a farm truck before it ended up in his barn, stored away with other hot rods and classic cars.[3]

The truck was never licensed in Oklahoma, and Shuten believes it stayed in Zain's possession until he passed away; "Someone went to buy another car from his kid, and found the truck." That someone was Larry Braswell of St. Cloud Classics in Chandler, Oklahoma. Larry did not realize the significance of the vehicle, all he knew is that it was a Roth and that it once had been featured in a magazine. Larry got in touch with Beau Boeckmann at Galpin Auto Sports, who ended up buying the old Roth creation. Led by Shuten, Galpin Motors' team of vehicle restoration experts refurbished the truck with NOS and other period-correct parts.[3]

January 27, 2017 the restored version of the truck made its first public appearance at the 2017 Grand National Roadster Show.

Please get in touch with us at mail@kustomrama.com if you have additional information or photos to share about Ed Roth's 1956 Ford.