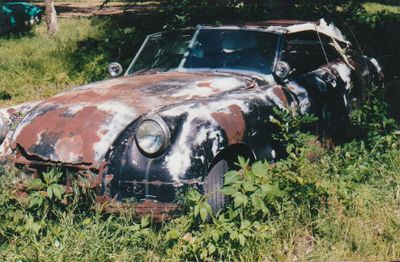 The car as it sat when Ed found it.Photo by Ed Malinski 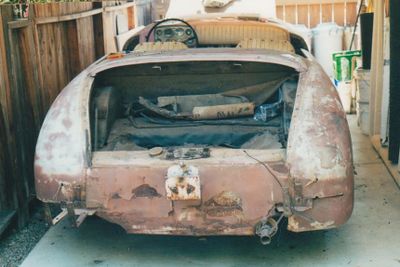 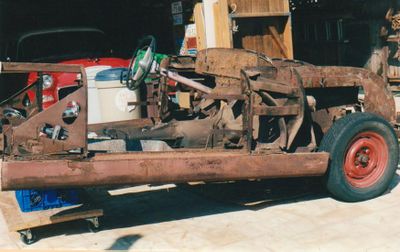 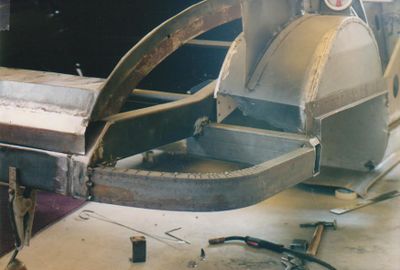 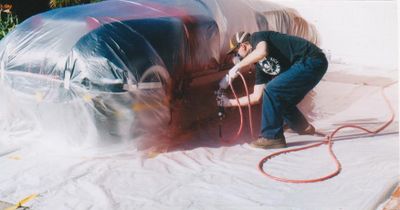 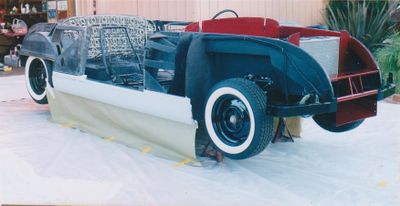 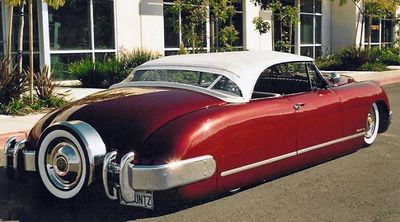 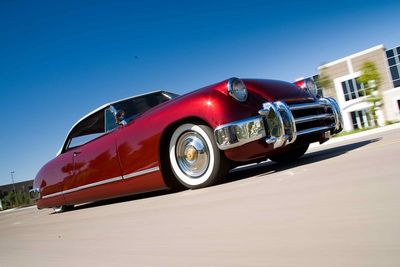 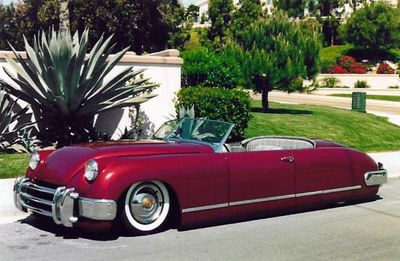 1953 Muntz owned by Ed Malinski of Carlsbad, California. Ed, who is the owner of Totally Custom Shop in Vista, California, is the owner of one of the last Muntz that left the factory. This story begins in 1985, after Ed purchased his 1955 Chevrolet. His cousin phoned and told him that he had bought a Muntz. A while later, the cousin called again and told him that he had picked up another Muntz that he just had to have. Malinski bought it unseen for $3500. The worn-out Lincoln flathead boiled over every time he got caught in traffic. Even though he loved the car, he sold it. One day, while he was cleaning papers out of an old cabinet and going through Muntz memorabilia, Ed stumbled over the phone number to a fellow up in Oklahoma who had three Muntz Jets. Ed gave him a call and the guy said "come get' em". And thats exactly what he did! The three Muntzes had changed hands a few times togheter, and it turned out that one of the cars was the very last Muntz that left Muntz Car Company in Evanston, Illinois. The last 15-18 Muntz that left the factory was made partly out of fiberglass, steel and aluminum in order to lower the production price. The cars were in very rough condition after sitting outside by the Arkansas River along with 40 other junkers for a while. All that was left of the three Convert-a-coupes were rusted steel and crumbled fiberglass. When Ed opened the door on the Muntz that was in the best condition, the car broke in half. The frame was shot, and the door latch was the only thing that held the car in one piece. He used a bottle jack to lift the middle of the car up in order to close the door.[1]

Ed bought a set of used tires and hired a tractor to tow the Muntz up to the main road to get it on the truck transporter. The two other cars were parted out for their best parts, thrown on the transporter and whatever was left were sold on eBay.[1]

Ed and his friend Aaron Holland restored the car back to pristine condition. The bottom six inches of the car couldn't be salvaged, and were replaced. According to Ed, the front fiberglass fenders were practically nothing but dust, although they were given a new life by reglassing them. Fiberglass is not stable, over time it will go back to dust again. Aaron reglassed the existing rear quarter panles, and fabricated the lower half of the body, using cardboard as a part of his mold.[1]

The famous unibody which the Muntz' featured was rusted away on Ed's ca, so he had Art Morrison to construct and build a new ladder chassis. The floor was raised three inches in order to accept the new frame. Ed Frigse rhino-lined the entire undercarriage, including the inner fenders. This was done in order to prevent the fiberglass near the bumper bracket to shatter. At the factory they bolted the bumpers straight to the fiberglass body with carriage bolts. This was done without using washers, shims or anything.[1]

The Du Vall looking windshield was chopped two inches and a padded Carson Top style top was fabricated and installed. The Muntz consisted by many different car parts, mostly Ford though. The headlights were from a 1950 Chevrolet and rumors has it that the bumpers were made from Greyhound buses. The hubcaps were similar to the Cadillac Sombreros, except for the center emblem, which featured Earl Muntz himself. Ed got four Cadillac Sombreros of Hubcap Mike Midwest and fabricated the molds placed in the center. They were based on the insignia from the wheelcovers of Ed's cousins Muntz. He made four or five of theese and glued them to the Cadillac emblem. 15x6-inch 1976 Dodge steel rims were used. All four corners on the Muntz were fit with Air Ride Technology airbags. A pair of dual Appleton 451 spotlights were also mounted. Once the body was complete, Aaron painted it in Candy Apple Red, mixed by Stan Betz. The karoseal interior was in good shape compared to the rest of the car. Ed replaced the front seat with bucket seats, and Jim's Auto Trim upholstered the interior with faux python naugahyde. A gray wool carpet was made to cover the floor. The Muntz cars featured Stewart-Warner gauges original from the factory. The steering wheel is a 1952 Lincoln accessory wheel.[1]

The car is sported by a Candy Apple Red 1995 Chevrolet Corvette LT-1 350-cid mill built by Ed and Tom Osborne of Fallbrook, California. The engine is hooked to a Chevrolet 4L60E 4-speed overdrive transmission. The car was fit with Ford disc brakes in order to secure good braking.[1]

After three years and 3500 hours of hard work, Ed's Muntz has become one of the prettiest most notable example of a Muntz ever to hit the streets.

Please get in touch with us at mail@kustomrama.com if you have additional information or photos to share about Ed Malinski's 1953 Muntz.