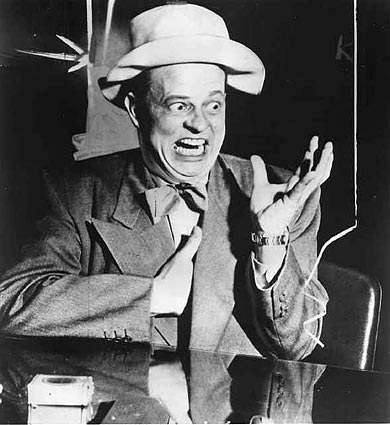 Earl Muntz was a used car salesman in Illinois. In the late Thirties he packed his bags and headed to Southern California where, in the war years and their aftermath, he discovered he could buy used cars back home in the Midwest, haul them to California and make a pretty good living re-selling them in the California car culture. He jumped on Henry Kaiser’s postwar bandwagon and became a Kaiser-Frazer dealer. Reputedly Earl Muntz’s Southern California dealerships sold 22,000 Kaiser-Frazers in 1947, one-seventh of the company’s total output.

An advertising campaign created by Mike Shore introduced Earl “Mad Man” Muntz, dressed up like Napoleon and shouting “I want to give them away, but Mrs. Muntz won’t let me … She’s CRAAAZY! … I buy ‘em retail, sell ‘em wholesale – It’s more fun that way.” Not surprisingly, over the years there were a total of seven Mrs. Muntzes. Neither is it surprising that Earl eventually went broke selling cars.

He made another fortune selling simple, low cost TVs of his own design and is credited with inventing the abbreviation “TV”; he even named his daughter Tee Vee. He made another one when he invented the stereo 4-track tape player that was the basis of Bill Lear’s 8-track.

Please get in touch with us at mail@kustomrama.com if you have additional information or photos to share about Earl Muntz.